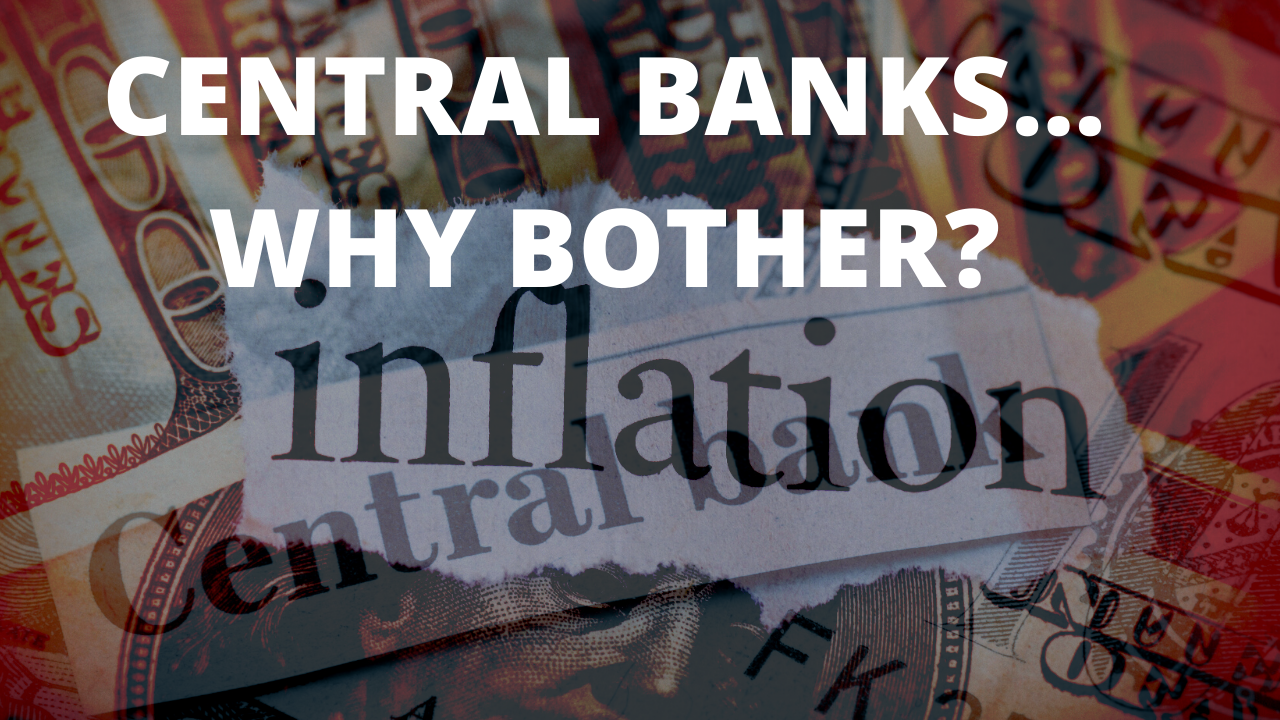 Central banks…why bother? Inflation is here and it cannot be contained. US inflation is touching a 40-year high, the UK has hit the 40-year high, and the EU’s has already hit an all-time high.

Figures of 8%, 9%, and 7% respectively are bad enough. This gives people strong enough reason to want to abolish central banks.

But the pain of rising expenses is made so much worse by the fact that no central banker has put their hands up and admitted they got it wrong.

So many are pointing to Putin and the pandemic as reasons for these record numbers.

With this in mind, we ask do we need central banks at all. Because if they can’t protect the value of the currency for the sake of the average saver and spender. Also, admit that they don’t know what to do then what are they here for?

The first attempt being shortly after the Revolutionary War ended in 1783. After the banking panic of 1907, the idea grew that a central bank to help alleviate banking panics was needed.

Arguments for a Central Bank

1) Every public beach needs a lifeguard. Expressed in financial terms this means that every economy needs a lender of last resort. The one who stands ready to provide loans in times of distress.

The 1907 panic in America did have an important person performing this function despite not having a central bank.

Junius Pierpont Morgan reportedly called all the troubled banks into his office. And triaged which banks needed closing, which needed to be sold, and which would be loaned money by a consortium he led.

Of course, it is important to note that J.P. Morgan’s triage in 1907 did not require any public finds at all.

3) Central banks are best suited to monitor the economy’s systemic financial health with the purpose of preventing the next crisis.

Although valid, the above sentence needs to be counterpointed by noting that central banks in reality often serve more like archeologists than architects.

No one remembers four crises that central banks prevented. However, everyone can name four crises which happened to grow right under their noses.

4) Central bankers purport to be experts at knowing what interest rates should be.

They are tasked with using unlimited balance sheets. This is to buy or sell bonds until interest rates move to where central banks want them to be.

Valid arguments continue to make against the need for central banks.

Arguments against the need for a central bank

Economies have existed for millions of years since humanity first began working in groups. Given these two facts, why is it accepted wisdom that a lifeguard is actually needed?

In fact, would it not be better for the economy that swimmers who overestimate their ability rely not upon a lifeguard but on friends, family, and society to decide what saving they need and when?

Translated into today’s language this question can be reframed as: since there are so few banks, does the continuing practice of bailouts not prevent natural lifecycle death if so – should we not view such death as the opening for smarter more innovative smaller banks to fill a void?

2) Even the control of interest rates by central banks becomes a risk outside the infrequent moments of crisis.

Let us ask where the level of interest rates would be without central banks keeping a thumb on the balance?

If the answer to the question is ‘higher’; then what zombie companies, banks, and governments are being kept alive instead of facing the true cost of borrowed money should be making them pay?

Would wars be so easily financeable if interest rates were higher after central banks stopped keeping them low in pursuit of stability?

Moreover, for Chair Powell it means protecting the status quo.

Powell and all central bankers see the status quo as good. This is because bankers and politicians holding status are exactly the people who created central banks and make his life easy.

3) Gold and silver investors view stability as the word which speaks to maintaining permanent purchasing power for their wealth.

Silver and gold are stable in a way that central bankers for western economies choose to not understand.

Moreover, the creation of central banks was to help avoid financial and banking panics.

But has the Federal Reserve and other major economy central banks become the catalyst for market panic and instability that they created to avoid?

The power of the central bank to print money and to purchases assets at will has created a new paradigm of selecting which companies should be saved and which should fail.

And now they are trying to raise interest rates to solve a problem that they created. This is by printing too much money and purchasing assets to keep the yield down on debt that should be paying more in interest.

By interfering in the market, they have destroyed the market pricing mechanism for debt securities.

This made it virtually impossible to raise rates very much further without causing an economic recession or financial stress in the market. Which eventually has the central bank reversing the policy. Then the recession cycle starts over again.

If you’re also worried about central bankers and their efforts to protect the status quo, then we point you in the direction of some great interviews on GoldCoreTV.

We recently spoke to Patrick Karim and David Walker about the US Federal Reserve’s plans.

It’s definitely worth tuning in to hear some great insights and what they think will happen to gold and silver prices, as a result.