18 hours ago
The Short Position in SLV
1 day ago
Here Is Why Silver Demand Will Climb to a New Record High! - Keith Neumeyer
4 days 1 hour ago
This Is Why NOW Is the Perfect Time to Buy Silver - Garrett Goggin
4 days 1 hour ago
Rico Charges Dropped On Silver Manipulation Trial
4 days 22 hours ago
Has Inflation Been Defeated?

Deflation Hinges on Dollar That Refuses to Die 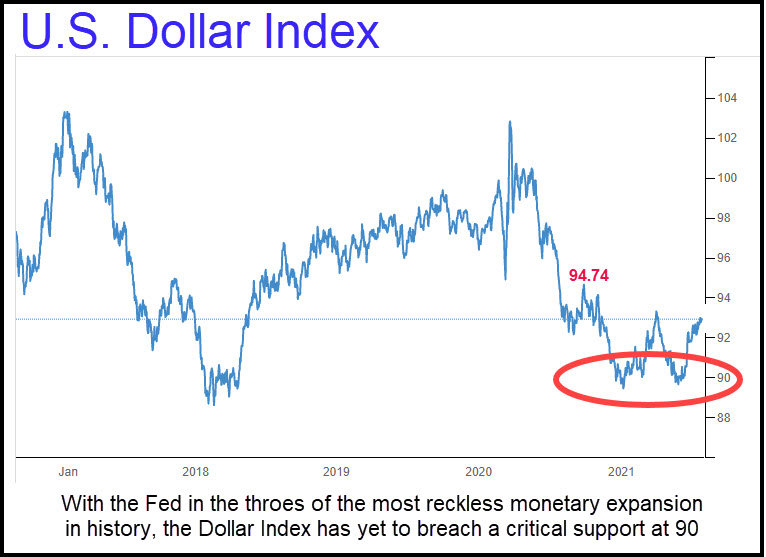 My friend Greg Hunter at USA Watchdog weighed in recently with such a despairing outlook for the dollar that perhaps it's time to see whether the charts support this view. Here’s the post from his site, which over the years has featured my own thoughts on deflation, the global economy and other topics:

The Fed keeps telling us that inflation is going to be transitory, and things will fall in price and go back to normal soon. Nobody is buying this in the real world where people are watching their dollars fall in value and are paying more for just about everything. In simple terms, the dollar is tanking. Maybe this is why JP Morgan is the first big bank (with many to follow) that is putting high-net-worth clients into crypto currencies. Bo Polny says this is all part of a "Jubilee year which began in September of last year and ends in early September of this year." Polny says, "Expect to see in the next four to five weeks a fall of the dollar, the world’s reserve currency. This could start as early as next week causing a run into tangible asset that include gold, silver and crypto currencies like Bitcoin. All hell is about to break loose on evil."

Sounds ominous, for sure. However, it flatly contradicts a forecast I’ve held to for decades – i.e., that deflation would ultimately wreck the global economy, driving the dollar into such scarcity that many, if not most, Americans will have to barter to survive. This may seem hard to believe at the moment, given the Fed’s reckless monetary blowout and the illusory prosperity it has created. Most of the virtual money has gone into investable assets, triggering a historical run-up in stocks during a year of Covid lockdowns. It has also created a real estate bubble even more extreme than the one that popped in 2008, nearly taking the global economy with it.

We should note that the current inflation is very different from the one of the 1970s. That was self-perpetuating to the extent wages and prices drove each other higher in a seemingly endless spiral. The current inflation is not self-perpetuating; rather, it is being driven by an increase in paper wealth that will reverse and crash in the next bear market. Nor are people desperate to trade dollars for physical assets, as occurs in a hyperinflation; mainly, it has been Baby boomers spending a significant portion of their paper wealth on second homes in desirable locations away from urban centers.

Still, one might ask: With the Fed and every other central bank inflating like there's no tomorrow, how could deflation possibly result?  The answer lies in the inescapable fact that every penny of what we collectively owe must ultimately be repaid –if not by the borrower, then by the lender. This implies, for one, that when Biden and the Democrats "forgive" student loans amounting to $1.7 trillion, creditors will eat the entire loss. Twelve zeroes worth of receivables will be wiped from their books with the stroke of the President's pen; shortly thereafter, yacht prices will begin to soften in West Palm Beach, and the market for $20+ million homes in the Hamptons will appear to totter, producing tremors in Aspen, Scarsdale and Atherton.

Now imagine this implosion multiplied a hundredfold. That's what will happen when the inevitable bear market in stocks unfolds. It will suck many more digital dollars into a black hole of deflation than the Fed could conceivably monetize in an unrehearsed attempt to hold off a collapse. The deleveraging will not stop until it has reduced the $2 quadrillion financial derivatives market to an infinitely dense singularity. A thousand financiers working 24/7 and backed by the full faith and credit of the U.S. Government will not be able to pry loose even a dime of credit from that market for at least a decade. That's how long it will take, at a minimum, for a wrecked middle class to push their credit scores back above 400.

The collapse will end our misplaced faith in a bank clearing system that is as fragile as Delft pottery, rendering ATMs and credit cards useless overnight. Money markets will seize up as lenders refuse to roll overnight loans, instead demanding settlement in cash. That’s when we will discover that real cash-dollars are actually in short supply. In the absence of a functioning market for digital dollars, the resulting short-squeeze on real ones will be like the one that pushed the shares of Gamestop and AMC into the stratosphere. The comparison is appropriate because, like debt issued by those two companies, the dollar ultimately is just a worthless I.O.U.

For the time being, however, the dollar will remain under pressure despite assurances from Fed bag-man Jerome Powell that inflation has peaked. We should note, however, that the dollar has not exactly collapsed under the weight of wantonly reckless Fed stimulus. To the contrary, and as the chart above makes clear, the greenback is down just 4% from the sweet spot of its pre-pandemic trading range. Moreover, a key, long-term support at 90 has survived two brutal shakedowns this year. Although the support could conceivably give way on renewed selling, nothing in the chart says this is likely, let alone that the dollar is in a condition of imminent collapse.

It is even arguable that the dollar index's sideways move since early 2015 has been base-building for a moon shot to 120 or higher.  That would be extremely bad news for anyone who owes dollars, since they would be far more difficult to come by. Unfortunately, this problem will enmesh us all, since it is not just a matter of mortgages and car loans, but also of our collective liabilities for private pensions, Social Security and Medicare. They are deflationary whales that will bear down on us when the actuarial folly that has sustained them is exposed by a stock-market bear. These whopping obligations to ourselves cannot be monetized without hyperinflating the programs themselves  into oblivion in just a few short months.

That’s one reason why the economic endgame is all but certain to feature deflation rather than hyperinflation. If there is a silver lining, it is that deflation will visit pain on borrowers that is more or less commensurate with their sins of excess. It would also leave intact the institutional conduits of credit.  Hyperinflation, on the other hand, would destroy the bond markets that enable lending, throwing the economy into a state of barter indefinitely. Could things ever get that bad? Most surely. It would simply reflect the deleveraging of illusory financial wealth that has grown to perhaps ten times the size of global trade in actual goods and services.  Like the stock market, the world's financial system is trading at an absurd multiple. Even more absurd is the notion that the problem can be stage-managed indefinitely with a "taper" crafted by the charlatans at the central bank.