14 hours 42 minutes ago
COT Silver Report - August 12, 2022
1 day 23 hours ago
Was $18 Silver the Bottom? Next Pivot? - Lawrence Lepard
3 days 2 hours ago
Silver Coin Premiums – Another Collapse?
4 days 1 hour ago
The End Game for Silver Shenanigans...
5 days 1 hour ago
The Fed Is All Talk, and JPMorgan Trial EXPLAINED - Chris Marcus

Let me begin by showing you this aerial demonstration of the Federal Reserve’s carefully orchestrated plan for bringing the US economy down for a soft landing: 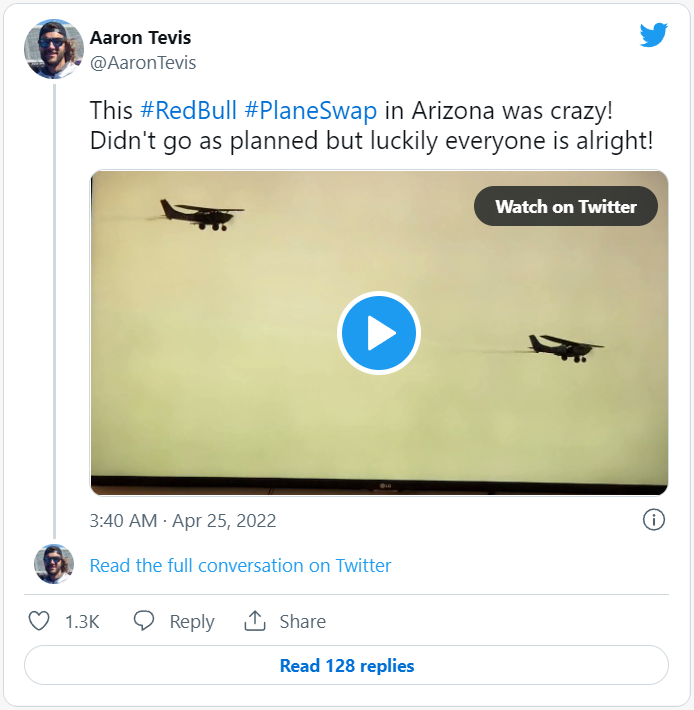 One plane was lost in the filming of this maneuver. It crashed into a stock yard, and killed the market bull it landed on. Hence, the name of the team — “Red Bull.” Very red. Very, very red.

It should be noted that, while stock and bond prices have been falling simultaneously, the Federal Reserve has not yet begun carrying out its emergency flight plan. It hasn’t even slowed its engines to start descent. It is still adding fuel to the nation’s money supply by expanding its balance sheet with gentle nudges of the throttle.

When the Fed did test a similar flight plan back in 2018, it ran erratically all year and ended when the Fed dove its plane into the frozen earth that December. Embolden by those results, Fed pilots will attempt similar maneuvers again this May with no more training but a lot more altitude. Perhaps the greater height from which they are attempting to lower their balance sheet will give them more time to correct for errors. Or maybe it will just give them more space for gaining speed before they hit the ground.

How has the Fed’s flight gone so far?

Meta, a metasexual pilot, known for their flying ace nickname, Faceplant, has been achieving aerobatic greatness with the Fed for some time, and here is a digital image of their recent vertical flight path and landing: 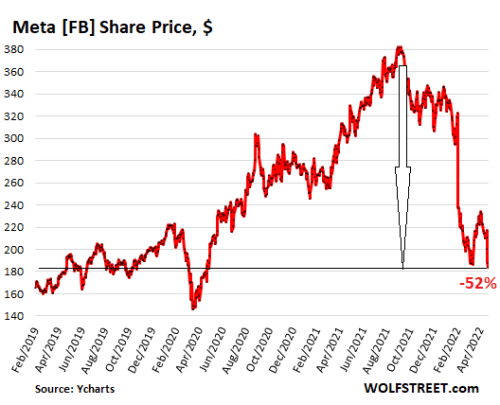 As you can see, they got a nice bounce at the end of the ride.

Other high-flying stocks have gone for similar deeply red rides over the past six months, with their declining flight path starting perfectly coincident with the Federal Reserve’s initiation of its balance-sheet taper, a maneuver in which the Fed doesn’t actually remove any fuel from the economy, but merely attempts to reduce the amount of added thrust, intended to slow the rate of rise … for just about everything. The arrow in each graph marks the spot in the journey of each of the nation’s highest fliers where the Fed began to taper its fuel increases. 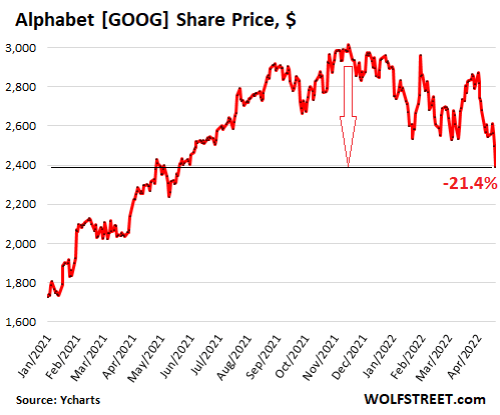 The ride after the Fed began to taper looks a little choppy. The arrow in each graph points down because everyone with a clear head knew that the mere attempt to reduce extra lift would cause the lead airframes that were flying on Fed rocket fuel to fall out of the sky. They flew like Space-X rockets when the Fed was applying full thrust, but started falling out of the sky as soon as the Fed merely tapered the throttle. (That was without shutting off the fuel, but just reducing the rate at which it was adding fuel.)

Microsoft-landing even attempted a “touch-and-go” landing. It did not end well: 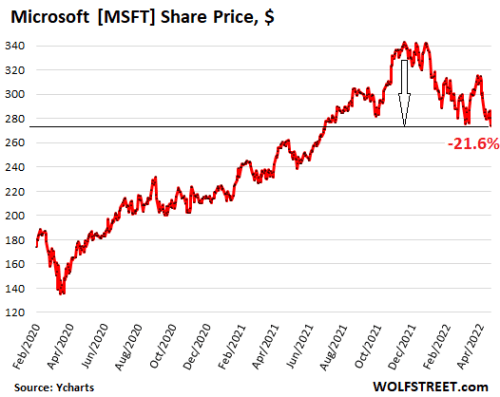 The apparent underhanded skill of these pilots to attempt such landings is stunning. As Wolf Richter recently noted when looking over their flight results:

I’m more and more amazed how Microsoft’s CEO picked the very peak to dump half his shares last November.

Not to be outdone, Amazon is now attempting a three-point landing: 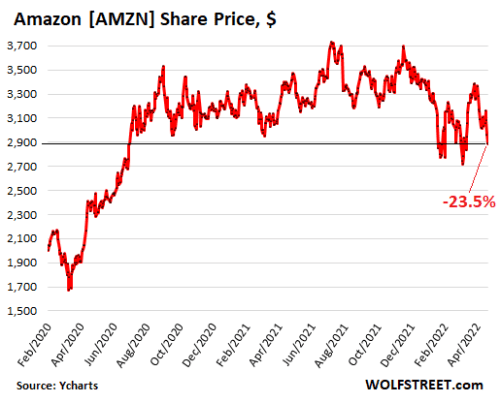 Apparently, they needed to get their plane up a couple more times in order to dump more shares.

All of these corporate jets, the nation’s finest, have bludgeoned the bull to end up in their own bear markets. Are they all idiots, or is it the Fed, which is the common denominator here?

Any daredevil activity of this kind sees its copycats. Many have died in their attempts to follow such greatnesses. As Richter also reported,

Hundreds of stocks have plunged since February 2021, one after the other, the most-hyped stocks taken out the back and shot, down 70%, 80%, and even over 90%, often just months after they started trading as a public company….

For much of the time, the giant stocks kept the overall stock-market indices from totally tanking despite the mayhem beneath the surface. But now the giants are letting go too. Meta already fell apart over the past few months. Amazon used a massive bout of financial engineering to stem the fall, and that only worked briefly. And today, Alphabet let go.

And who would have known that cars can fly, except maybe the guy who makes both cars and things that fly … very high? 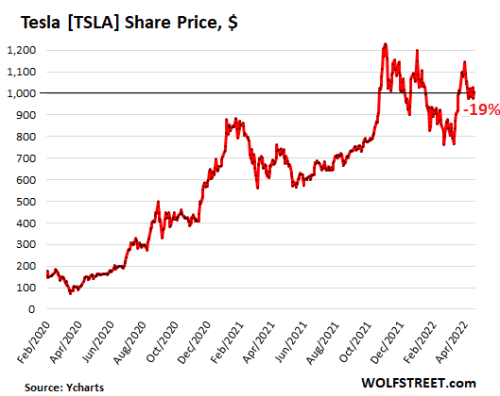 Tesla is also at present just a skid mark away from being in its own bear market, having earlier spent most of the year deep in bear territory.

One thing quite clear from all these flight paths is that the rides all hit major turbulence, starting a steep downward glide slope, long before the invasion in Ukraine began. Most of them actually bounced back up during the first month of the war and then began to fall again.

The motto when flying Federal Scarelines is “Be prepared or be scared.”

Bonds are bust, too

If you were thinking of taking the Safe Haven Express by riding the bond train, don’t bother. The situation over there is just as bad:

The bond market, St. Louis Fed President James Bullard said on Thursday, “is not looking like a very safe place to be.” Few investors would argue with that — except, perhaps, to call it an understatement…. New waves of selling engulfed the Treasury market over the past week, roiling investors and analysts who’ve been trying to predict just how high yields will go.

“It’s a tornado right now,” said Gregory Faranello, head of U.S. rates trading and strategy for AmeriVet Securities. “Fed policy really matters now, and it’s no longer lift-off. The question is where are they going?”

Signs of investors losing their bearings are everywhere….

Already in 2022, Treasuries have lost over 8%, by far the worst start in the history of a Bloomberg index starting in 1973….

“The Fed has lost control of inflation,” Faranello said.

And that’s wonderful … because the ride hasn’t even begun! The Fed is about to attempt a loop in a 747 with its engines off. Never been done before. It plans to finish the loop by landing inverted on a narrow mountain ridge with no runways — a grand-slam of a maneuver that has never known any survivors when attempted on smaller scales, for the Fed has crashed every recovery route it has ever flown. So, buckle up, Buttercup! With the Fed’s most dangerous maneuvers set to start in May, it might be time to grab your own gold parachute if you don’t already have one.

Woohoo! Wait till the ride begins! (Well, don’t actually. Be prepared or be scared.) 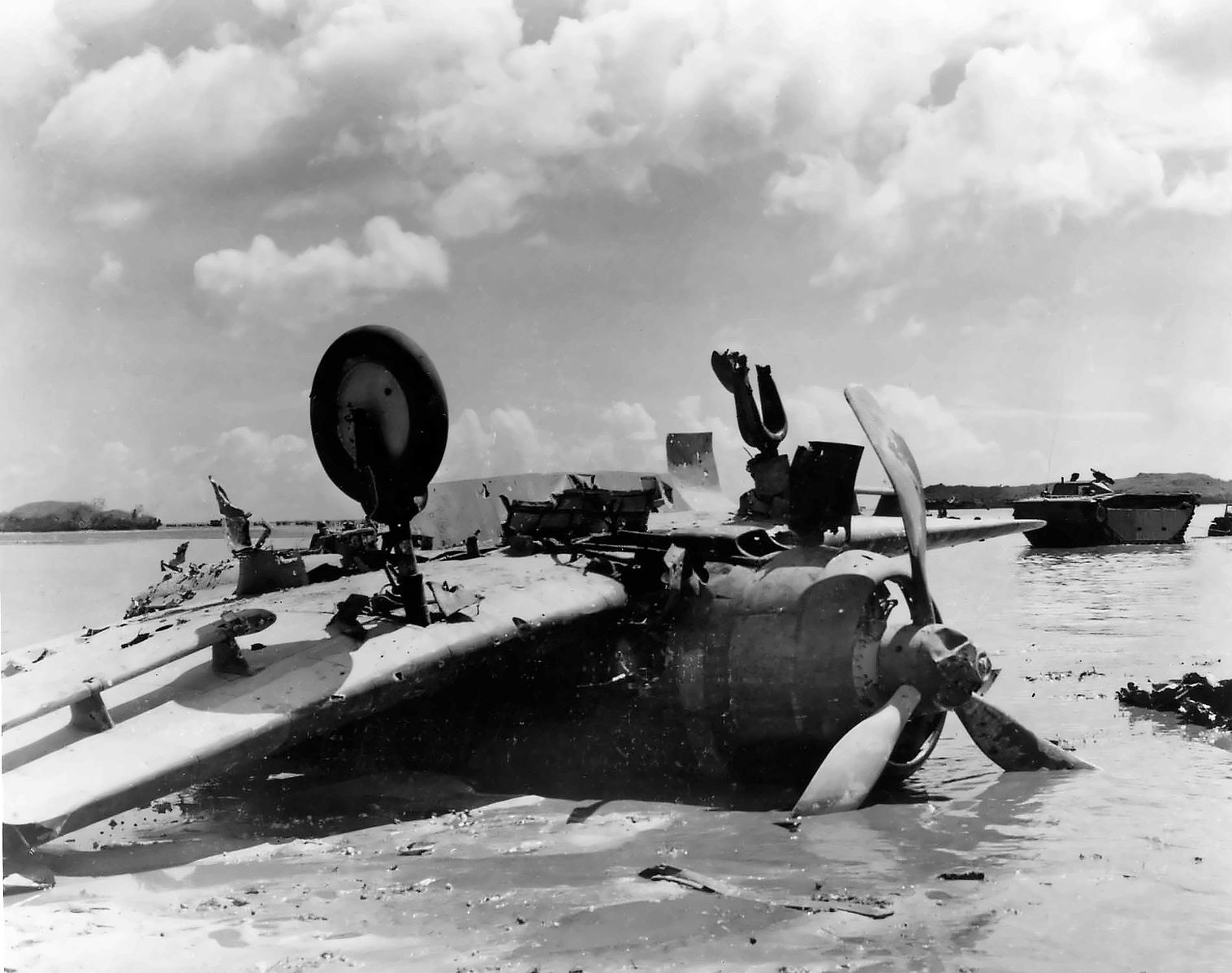