13 hours 55 minutes ago
COT Silver Report - August 12, 2022
1 day 22 hours ago
Was $18 Silver the Bottom? Next Pivot? - Lawrence Lepard
3 days 2 hours ago
Silver Coin Premiums – Another Collapse?
4 days ago
The End Game for Silver Shenanigans...
5 days ago
The Fed Is All Talk, and JPMorgan Trial EXPLAINED - Chris Marcus

The Glowing News Climate and the Bond Bull's Return

[Editor’s note: The following was sent out to clients in mid-July by my friend Doug Behnfield, a financial advisor and senior vice president at Morgan Stanley Wealth Management in Boulder, CO.  Long-time followers of Rick’s Picks will be familiar with Doug’s work, since his thoughts have appeared here many times. I have always referred to him not only as the smartest investor I know, but one of the smartest guys. He still is. I am grateful to him for allowing me to share his insights with you. However, I must I must apologize for some formatting changes that were necessary due to typographical limitations on my end. Doug’s original letter was meticulously footnoted, and some text that was bullet-pointed I have rendered in paragraph form. Otherwise, the content is unchanged. RA]

In all 44 years as a Financial Advisor (aka Account Executive, stockbroker), I have never been aware of any respected stock market pundit that “called the top” in close proximity to the actual beginning of a true Bear Market. However, an associate once gave me a report late in 1987 that had been issued in July, 1987 written by Justin Mamis entitled The Philosophy of Tops. He wrote it just three months before the Crash of October 1987. It has been in my permanent file for decades and I dragged it out a few months ago to remind me how utterly difficult it is to know how high is too high (or how low is too low) in the stock market. After all this experience in the business, I wish I knew, or that I knew someone who knew, on a timely basis. But, alas, it has been too much to ask.

That doesn’t mean that I haven’t accumulated a meaningful amount of market wisdom over the years. As Leonardo Da Vinci said: “Wisdom is the daughter of experience”. Amos ‘n Andy had something to say about it too. So here is some of my market wisdom: 1) There are no secular bear markets that are the result of geopolitical,economic or natural disaster events, historically, that I am aware of; 2) Market crashes that occur as a result of these events tend to be “buy the dip” opportunities, and 3) Examples of this are the Covid-19 lockdown, the 9-11 attack on the World Trade Center, Hurricane Katrina and the Cuban Missile Crisis.

I hosted a dinner in New York City several years ago with Arthur Cashin, Ray DeVoe and David Rosenberg in attendance, among others. Art told the story of the rookie trader on the floor of the New York Stock Exchange in
1962 who blurted out “let’s short everything!” when the news hit the tape that our country was confronting the Russians by blockading their ships bound for Cuba and the market was crashing. The response from Art was,
“No, you buy everything. Either this gets resolved quickly or we’re all fried and we won’t need to pay for the trades” (as in nuclear holocaust). Buy the dip.

On the flip side, there is a great deal of danger associated with being complacent and fully invested (whatever that means) at the top of a secular bull market when a bear market looms, for obvious reasons. Bob Farrell’s Rule #5 applies here: “The public buys the most at the top and the least at the bottom.” From Justin Mamis’ report on it back in 1987, I have a few favorite quotes:  **  “Unlike bottoms…tops seem to come out of nowhere, indeed, out of a glowing, good news climate.”  ** “A bull market itself is lulling, like lying on the beach on a lovely summer’s day: at first, feeling healthy, you play volleyball and jog a little, enjoy brief dips, and then, somehow, you can’t keep your eyes open. ‘Isn’t this marvelous?’ you whisper as you doze off.” ** “The one eternal aspect of every market top is that it occurs before we’re ready for it.”

Many of the characteristics that he cited as topping conditions are also present today.

Which brings me to the Treasury bond market. Yields broke out of a low trading range on the upside last fall as the vaccine arrived and the Democrats won the national election. The rise in rates accelerated as the Georgia runoffs produced a Senate majority for the Democrats. This was because the one-party control of the Federal Government seemed to assure the passage of massive fiscal stimulus which was believed to usher in a stronger recovery with inflationary implications. However, the rise in rates came to an abrupt halt in mid-March, just as the last stimulus checks were being issued. Who says the markets are not a discounting mechanism?

Since 30-Year Treasury rates peaked on March 18, the popular financial press has been filled with threatening (hopeful?) articles about the likelihood of inflation finally rearing its ugly head (after 40 years?) and skyrocketing interest rates due to the inevitable economic boom ahead. The fact that interest rates have declined dramatically (in the case of the 30-Year Treasury yield, from 2.5% then down to 1.9% currently), renders the debate settled: inflation is transitory. The spike really was about “base effects” from the deflation prints last fall and the short list of  components that are bottleneck victims dominating the recently elevated CPI numbers. Those factors are quickly receding into the past. Keep in mind that inflation has a closer correlation to long-term rates than any other measurable economic or market factor.

The Second Quarter saw a downside reversal in interest rates on Treasuries, and Municipal bonds continued to perform well. Gold recovered too. Stocks were higher. Here are some representative Q2 (not YTD) performance figures as of 06/30/2021:

The decline in interest rates that began in mid-March accelerated in mid[1]May, just as economic data in general began to disappoint. The red-hot housing market has begun showing signs of cooling off, as has consumer spending, consumer sentiment and industrial production. In addition, the new “Delta Strain” of Coronavirus has been able to infect a broad spectrum of the global population, including those that have previously contracted the virus and those who have been vaccinated. 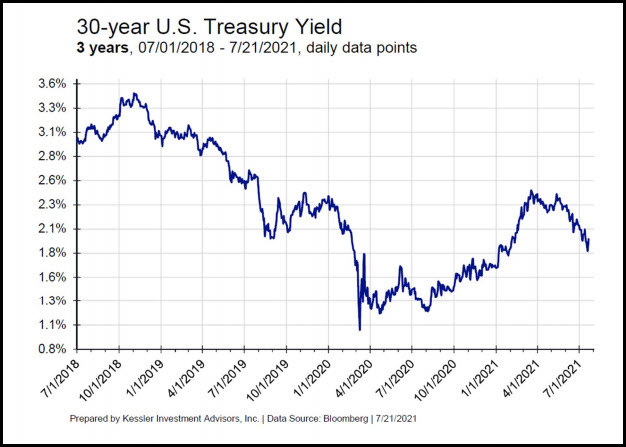 The risk of a weaker Second Half outlook (and into 2022), is supported by the risks associated with the end of Federal fiscal direct stimulus to households, extended unemployment benefits in September, and moratoriums on rent and student loan payments by year-end. Commodity prices have been deflating recently along with crypto currencies and Meme stocks. Lumber, which hit a high of $1,733 thousand board feet (TBF) in May, recently traded at $484, near pre-pandemic levels and down 72% from the high. While the stock market continued its push higher in the Second Quarter, some market analysts are pointing out that there has been evidence of extreme bullishness and speculation being expressed by individual investors. Margin debt is at record highs and that does not include the non[1]purpose securities-backed lines of credit that make it possible for all those homes in Aspen to be “bought with cash”. In addition, many arcane market technical indicators such as breadth have deteriorated markedly. Many of the current technical and sentiment conditions are reminiscent of  what was outlined in “The Philosophy of Tops”. The predominant leadership for most of the bull market that began way back in 2009; the Mega-Cap stocks, has been faltering since Labor Day. Conventional measures of valuation, including Price/Earnings Ratios (high) and Dividend Yields (low) are at historically unprecedented levels. Scariest of all is the  parabolic nature of the advance, particularly coming off the Pandemic-[1]Crash low. 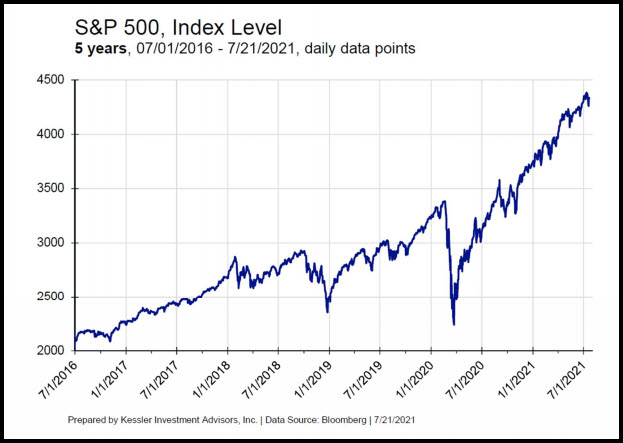 The risk of a weaker Second Half outlook (and into 2022), is supported by the risks associated with the end of Federal fiscal direct stimulus to Needless to say, the apparent resumption of the Great Bull Market in Bonds can be helped along by reduced inflation caused by any economic weakness and/or a reversal in the stock and real estate markets.