Today is a better set up and here is why

Market volatility is rising. Despite the phony reporting that inflation is coming down, inflation is at its highest level in 40 years. Lies like the M2 is contracting are monstrous-style falsehoods with disturbing intensity. The more false the statement, the more enthusiastic the lie. M2 is a cherry-picked stat showing cash circulating plus money in bank accounts and money markets.

The reason M2 is shrinking is that people are withdrawing their savings en masse to make ends meet. So stating that M2 is shrinking to demonstrate you are fighting inflation is pure insanity. M2 is shrinking because people's real wages have decreased for 21 consecutive months (a new record).

People are pulling out money to buy food and pay overhead. These are for the people lucky enough to have savings. Another way of saying this is that bank deposits are negative.

1/ Market instability will continue in 2023

2/ Inflation will increase in 2023 for many reasons, such as past QE and supply chain disasters.

3/ The Fed, US Treasury, Executive branch and Congress will do their normal debate dance about raising the debt ceiling or closing down the government.

The Fed is lying when they say they are fighting inflation by raising rates.

If the Fed really wanted to fight inflation they could increase the reserve requirement for banks. Banks do not hold cash reserves that match your deposits (within the fractional reserve banking scheme.) So if you deposit $100,000 dollars, the bank does not have to keep ANY OF THAT UNDER YOUR NAME.

Your deposit, by law, is just a loan to the bank. And if they fail, they are either bailed out by the public or "bailed in" by law. A "bail-in" means they keep your deposit, and you lose your money. They will give you a paper certificate symbolizing worthless shares of the very bank that went bankrupt. 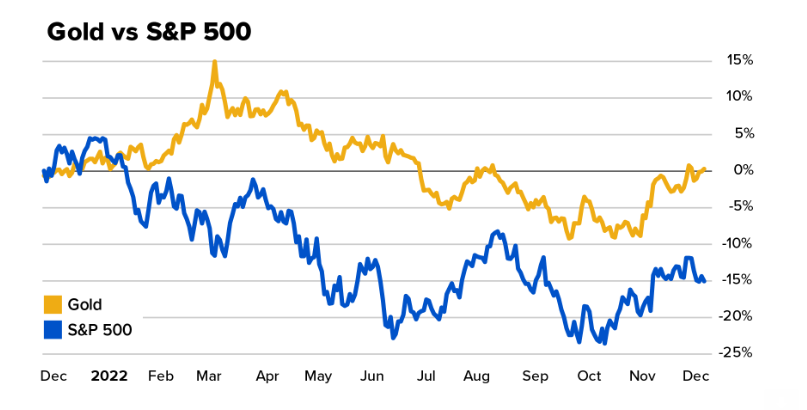 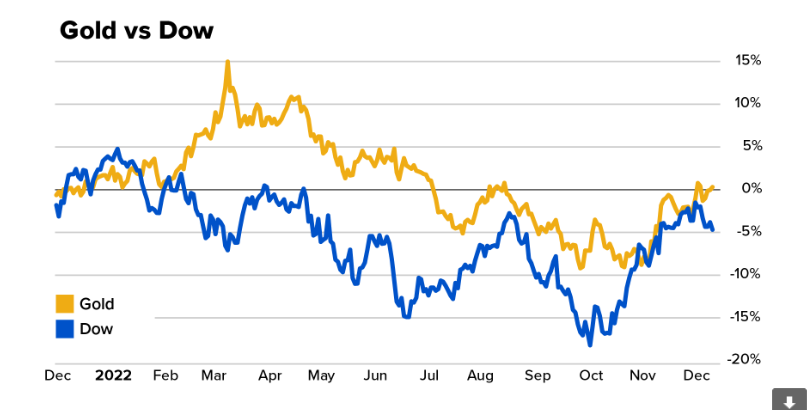 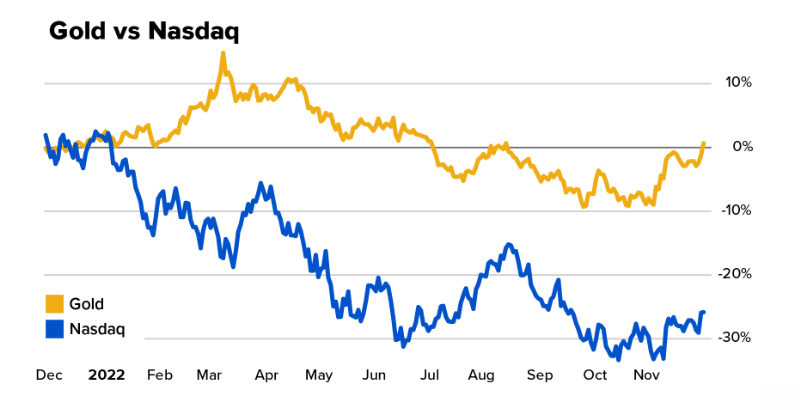 Now look at gold against standard asset classes together in one chart. 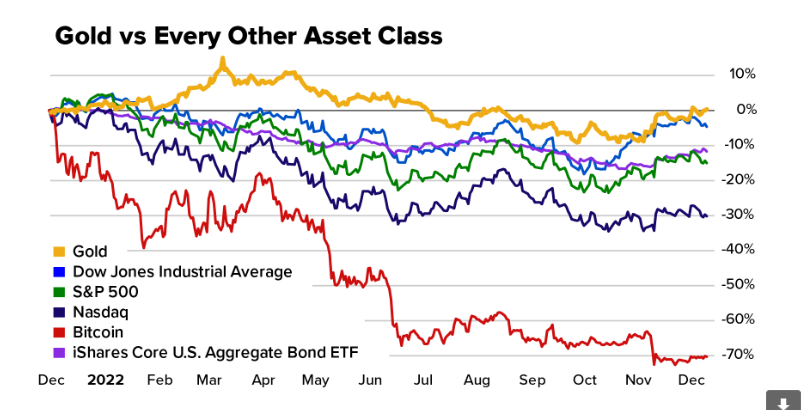 Let's discuss why gold will continue to do well in 2023.

Gold is the barometer for how people feel overall about monetary policy. If the market believed the economy was healthy and that monetary policy made sense, gold would drop like a rock.

So we have these things happening:

All these things are OK, but my thesis is that gold goes much higher in ratios related to how much lower there is trust in the government. The people's trust and faith are hitting all-time lows, which means gold will start approaching new all-time highs. 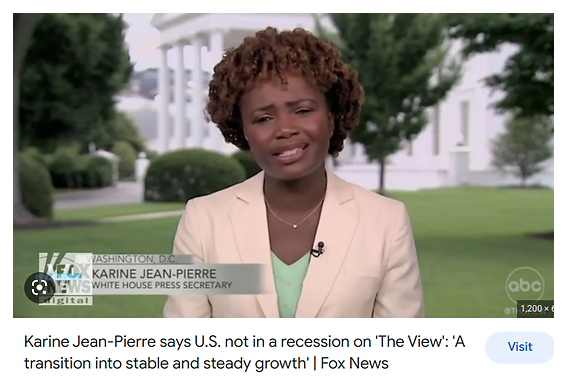 Why such distrust? Because of the increasing lies by the government, The Fed and the legacy media. Another big source of distrust is government censorship. Americans grew up hearing about all the censorship that took place behind the Iron Curtain and that takes place in places like China and North Korea. I believe the US is not any better.

Between the documentation obtained through a recent lawsuit against the White House and the Twitter files released by Elon Musk, it’s become quite clear that every facet of the U.S. government, including its intelligence agencies, are involved in illegal and unconstitutional censorship

So do we get a choice between lies (propaganda) or censorship? No you don't. You get both!

Gold is rising because there is a lack of trust in the health of the US dollar at home. This domestic lack of confidence stems from the reasons I mentioned above.

Why is the US dollar failing at home?

It's a matter of trust. Precious metals people know that the US dollar has lost 98% of its purchasing power over the past several decades but the emotion of trust is just as significant.

The structure of the fiat financial system has destroyed the middle class. The oligarchy has siphoned wealth through inflation and taxation.

Manipulated interest rates and money printing have grown the wealth gap. And it's bound to get worse. At this point, I'd like to point out that the term mentioned above, "oligarchy," is only partially true.

We're suffering through a lethal mix of oligarchy and plutocracy, but we mostly have a kleptocracy.

Kleptocracy differs from plutocracy (ruled by the richest) and oligarchy (headed by a small elite). In a kleptocracy, corrupt politicians enrich themselves secretly outside the rule of law through kickbacks, bribes, and special favors, or they simply direct state funds to themselves and their associates.

Those closest to the money printer were the primary beneficiaries. The US printed $6.4 TRILLION, and in 2021 billionaires saw their wealth increase by $5.1 TRILLION. The ruling class benefited from the money printing.

Meanwhile, the middle class had their businesses closed, and their living cost doubled, destroying savings; The Fed stepped in and said they would champion "The fight against inflation" (which they created & benefitted from)

The US has enjoyed dominating the global monetary system. It's often presented to the public like it's the natural order of things, such as the law of gravity, or just believed it's a given like oxygen will always be there to breathe. This assumption-based narrative leads people to think that the rest of the World is alright with the US being the global reserve currency or this is just the de facto World state of affairs.

Nothing is further from the truth.

The US must be vigilant to maintain US dollar hegemony. The playbook looks like this:

Naturally, hundreds of countries are trying to exit this type of system.

The de-dollarization process is well underway. BRICS has unfurled their Russian Ruble pegged to gold. This system was designed by Russian economist Sergey Glazyev. Sergey Glazyev and his eastern and southern partners are seizing this unique chance to "jump off" the sinking ship of the dollar-centric debt economy. 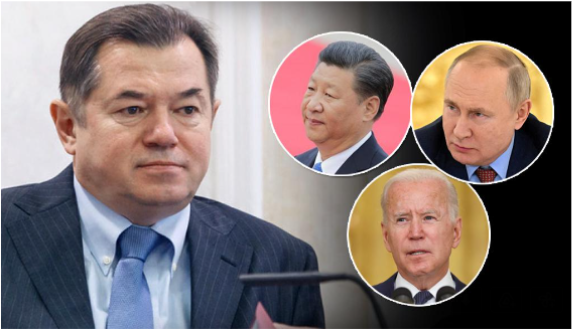 Sergey Glazyev, Russian economist and architect of the gold-pegged ruble.

Why was he the first person US sanctioned in 2014? 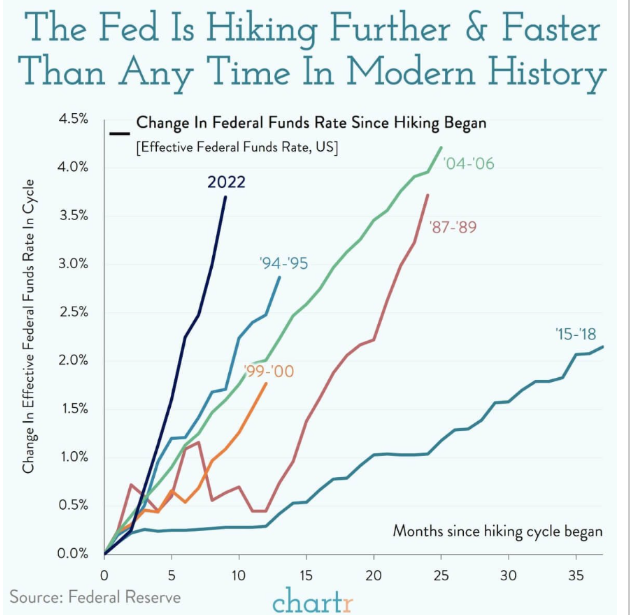 The Fed knows they created inflation and that they can't raise rates to fight it. We don't have the funds to service the debt. Therefore, it's simple logic to understand they are intentionally destroying the economy.

Why is The Fed wrecking things intentionally?

Because this will give cause to come to the rescue with their Central Bank Digital Currency. The CBDC is also called The Fed Dollar. You can look it up here under President Biden's Executive order #14067

Here are some disturbing features of the CBDC

Just recently all US flights were grounded because of a computer glitch. Meanwhile globalists are telling everyone “beware of more cyber attacks.” Remember, there is no such thing as a coincidence. Like a switch, all our funds can be turned off. This is why you need real money like gold and silver. Not the Fed Digital Dollar.

Join the fight against the evil CBDC. https://www.reddit.com/r/noCBDC/