Story at a Glance:

As we descend into the Twilight Zone, the major stock indices made new highs this week, showing, once again, that fake money encourages fake prices.

Gold and silver prices are inexpensive relative to “paper” prices—see below.

“There is as much craziness now as there was in late 1999 or 1929. This is the real thing… It looked like we were in a bubble mode this summer, but the real craziness has come out in the last few months.”

Yes, the U.S. has slipped over the edge into the twilight zone of fiscal, monetary, political, and social craziness. Crazy behavior and policies have consequences.

Fiscal Craziness: Official national debt exceeds $27 trillion, about $200,000 per employed adult in the U.S. Practically speaking, no one cares. Congress will pass another (expensive) COVID bailout, tax revenues are falling, expenditures are up, and debt will blast higher. No one cares, yet.

Possible Head of Office of Budget and Management:

“Deficits and debt pose no comparable risk [to COVID-19]. Policymakers should set aside their concerns about red ink and deliver the response the crisis demands.” (Translate: spend, spend, spend!)

Monetary Craziness: Global central banks have created over $28 trillion in “fake money,” which boosted stocks and bonds to extreme heights. That “fake money” lifted the wealth of billionaires while millions of Americans lost jobs, and thousands of small businesses closed their doors forever. Bankruptcies escalated because of lockdowns.

Political craziness: Election fraud has been prevalent for decades. Politicians play fast and loose with the truth. Pervasive lies, loss of trust, and delusions (regardless of political affiliation) will extract a large price.

“We have put together, I think, the most extensive and inclusive voter fraud organization in the history of American politics.”

Did he slip and tell the truth? Did he intend to say something else?

Social craziness: Lockdowns, required masks while exercising outside, wearing a mask between bites of food (California), children are asked to report parental mask and multi-family violations (Vermont), not wearing a mask is an “act of domestic terrorism (L.A.), churches rebranded as “family friendly strip clubs” (the virus is communicable in California churches, but not strip clubs), Mayor of Austin, TX “We need to stay home… this is not the time to relax.” [He was in Mexico.] Add suicides, drug abuse, alcoholism, spousal abuse, and other consequences of government mandated confinement.

CRAZINESS IS RELATIVE TO THE OBSERVER:

Who can we depend upon? What is real? What reduces craziness? Where is the vaccine that protects people from dishonest money? Consider the following comparisons.

SLIPPING OVER THE EDGE INTO THE TWILIGHT ZONE:

Let’s loosen our grasp on the official narrative, leave the beaten path, and tumble into the Twilight Zone. There we might find:

a)  A world where President Kennedy was not killed by “a lone gunman.”

b)  The Gulf of Tonkin incident, that justified the Vietnam War, was fiction.

d)  The Federal Reserve admitted their policies are NOT designed to preserve the dollar’s purchasing power.

e)  Truth about the 9-11 attack was revealed, not repressed.

f)    The Treasury department released the truth concerning gold stored at Fort Knox. In the Twilight Zone, that gold was audited, assayed, and counted.

Once we have delved into the Twilight Zone, what do we discover regarding gold, silver, paper currency units, and unpayable debts?

Compare the price of gold to population adjusted National Debt and M3, a measure of currency units in circulation. 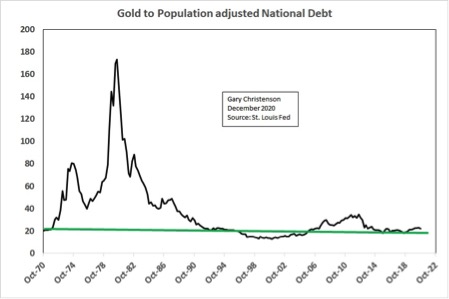 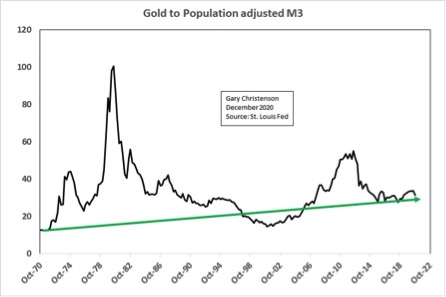 Assume that Fort Knox gold is valued at market prices and compare that value to national debt and M3.

The graphs over five decades show that debt and M3 increase more rapidly than the market value of Fort Knox Gold. The abundance of currency units and massive debt make the gold stored in Fort Knox appear tiny and irrelevant—until that gold is required to stabilize a failing monetary system. 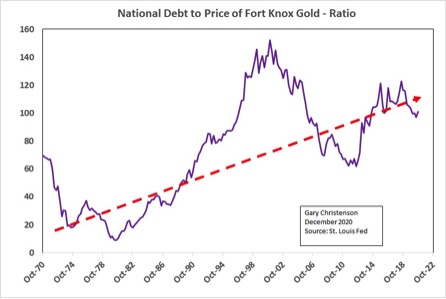 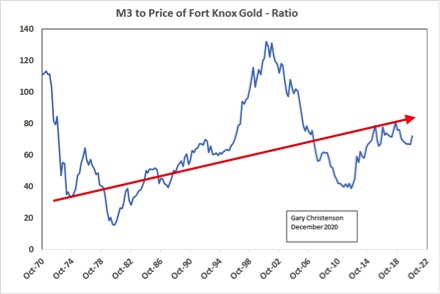 Descending deeper into the Twilight Zone, assume The Federal Reserve loses control (someday) over confidence in the dollar, bond markets, and demand for dollars in world trade. Hyper-inflation could occur after enough months or years of QE4ever.

a)  Promises from politicians?

b)  Faith and trust in Janet Yellen?

But, the naysayers scream, there is not enough gold to back a national currency. Nonsense! Price gold high enough to compensate for the trillions of digital dollars created since 1971.

How high? Suppose that 20% of dollars in circulation, as measured by M3, were backed by the gold in Fort Knox. Ignore the other smaller depositories where gold is supposedly stored. Honest money should be backed 100% by gold, but assume ONLY 20% backing. 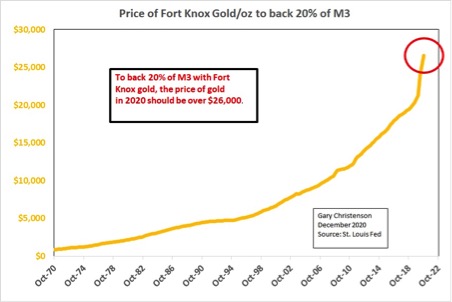 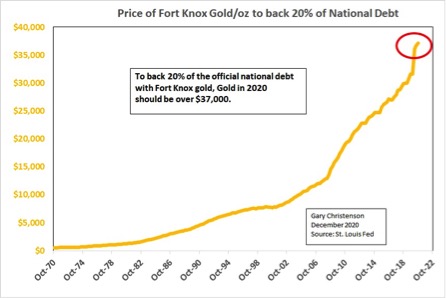 Thoughts: If they must price gold at $25,000 to $40,000 (in late 2020) to back only 20% of M3 or national debt, then gold prices at less than $2,000 are inexpensive. In a monetary or hyper-inflationary crisis, gold prices will be reset far higher, to create faith in a new gold backed currency after they have printed Federal Reserve Notes into oblivion.

Miles Franklin sells real money—gold and silver bullion and coins. Owning gold and silver makes sense unless you trust the powers-that-be to protect your assets and purchasing power, and you expect they will reverse the craziness.