Gold Seeker Issue #49 ~ This Week In Mining: After A Wild Week, Things Are Looking Up

Looking forward to next week, there is a reasonably high probability the Democrats will be able to push through a massive partisan stimulus package. It’s funny that all of sudden the Republicans are flip-flopping regarding massive government spending but that’s politics, where there are no ideals. The passing of another large stimulus bull should light a fire under the precious metals and the mining stocks.

The heavy selling of gold on Thursday reeked of manipulation, though it did hold support and rebounded a bit on Friday. While gold’s chart continues to look weak, the same can’t be said after silver’s wild week as it continues to make a series of higher lows coupled with the gold-to-silver ratio trading at lower and lower levels.

Abraplata Resources: announce the latest assays received for five diamond drill holes on its wholly-owned Diablillos project. Four of the drill holes were designed to develop shallow resources within the Whittle Pit area at Oculto. Two were short holes drilled to a depth of only 50 meters from the same platform to test for near-surface gold mineralization. Both holes intersected significant gold and silver mineralization near-surface. Highlights include: 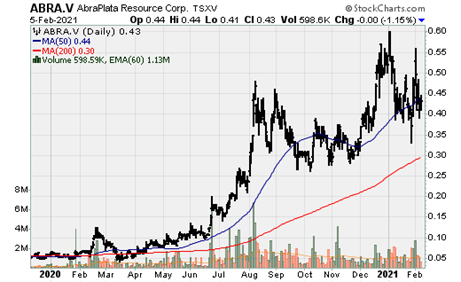 Eldorado Gold: Signed an amended investment agreement with the Hellenic Republic regarding its Greek operations and projects. The agreement includes optimized investment plans for the Kassandra Mines (Skouries, Olympias, and Stratoni) include:

The agreement will be submitted to the Greek Parliament, with a vote expected in an upcoming parliamentary session. Should this pass, this will provide material medium-term growth. 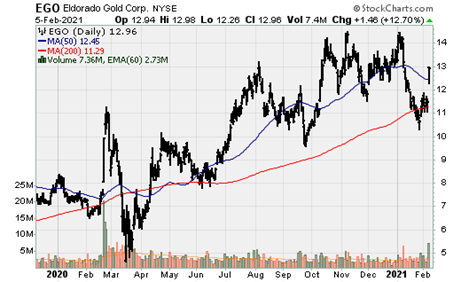 Excellon Resources: Announced underground expansion and exploration drilling results at its high-grade silver mine, Platosa. Highlights include: 4.2m @ 741 g/t Ag, 7.5% Pb, 4.8% Zn and 0.90 g/t Au and 2.4m @ 728 g/t Ag, 21.20% Pb and 17.8% Zn. Drilling is underway to define and discover new mineralization in the Platosa deposit area that was never effectively drilled from surface, the Gap zone, with 300m of potential strike to be explored. Two rigs are turning underground right now, with several targets. 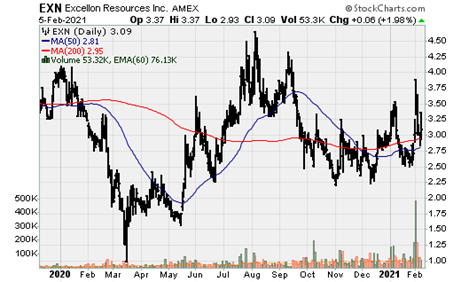 Karora Resources: Reported drill results from the Larkin zone at its Beta Hunt mine. Visible gold was observed in the Larkin zone drill core from the infill drilling program, demonstrating the potential for a third gold resource in addition to A zone and Western Flanks:

The production centers are Western Flanks and the A zone, and this re-affirms the company's that the operation can increase reserves and resources well beyond the current MRE. These will be included in the next resource update. Larkin was discovered last September, and it is still early days, but it will be a focus of exploration. It is open at depth and along strike to the southeast. 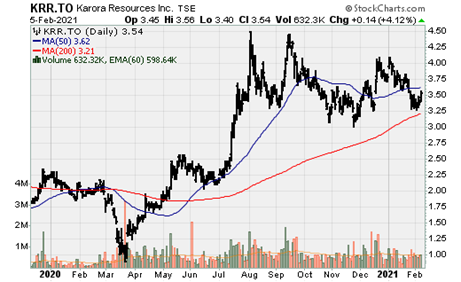 New Found Gold: Announced it had filed a Form 20-F to list on the NYSE. This should bring more interest into this exciting exploration program, which has had tremendous early success at its Queensway Project, Newfoundland. There should be near-constant news flow over the rest of the year, and the company completes its aggressive 200k meter drill program. 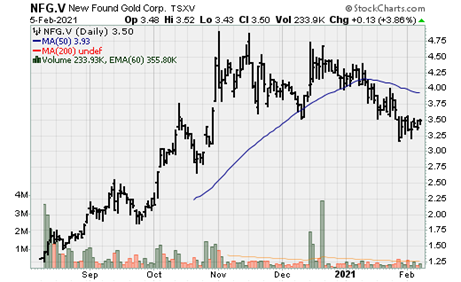 Novo Resources: Received final regulatory approvals and provided an operational update from Beaton's Creek. All approvals have been received to being production. The plant has entered the commissioning phase, which has been completed on time and within the budget. With the project advancing towards commercial production, Novo will soon be a junior producer. 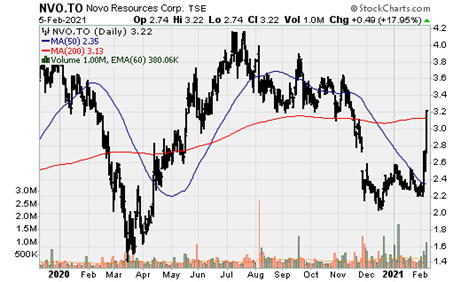 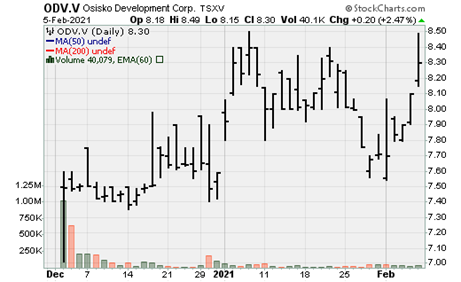 Premier Gold: The company announced the I-80 management team (note: Premier is in the process of being acquired from Equinox Gold, but Premier's Nevada assets will be spun-off into I-80 gold, which will be 70% owned by Premier shareholders, with Equinox retaining a 30% interest). Management will be as follows: 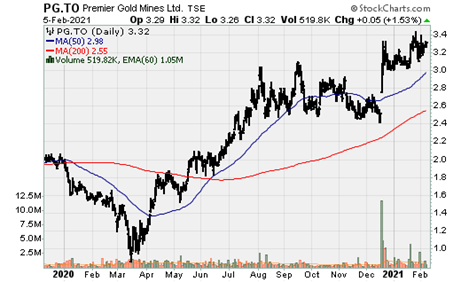 The company made this discovery a year ago. It is becoming increasingly clear this has the potential to be a large-scale project, with drilling demonstrating broad intersections of mineralization with lower-grade halos surrounding higher grade quartz veins. Roxgold is a high-growth junior producer and looks like an attractive takeover target, especially if it can delineate a large economic resource at Bousosoura. 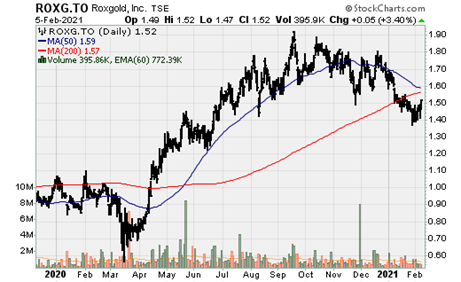 Royal Gold: Reported record Q2 revenue for its fiscal year 2021 (Q4 calendar year 2020). Royal generated operating cash flow of $99.9m (+28% y/y) on revenue of $158.4m from the sale of 84.5k AuEq oz. Royal ended the year with a net cash position of $182m and $1.2B in available liquidity. The company also increased its annual dividend by 7.0% to $1.20/share, the 20th consecutive annual increase. Its primary growth project, the Khoemacau (silver stream) project, is 85% complete, with 80% of the base stream (80%) fully funded. The project is on track to ship the first concentrate in Q3 2021. After quarter-end, Royal Gold made the last advanced payment of $32.6 and completed the advanced payments to earn the full base silver stream (80%). Under the stream agreement, the operator may elect to draw $53m in additional financing to earn Royal up to an additional 20% silver stream. 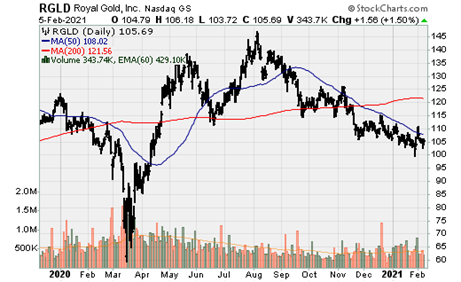 Santacruz Silver: The turn-around at Santacruz is coming full circle ad it announced record production in 2020 of 3.7m AgEq oz. This was comprised of 1.157m oz. Ag, 11k tons Zn, 4k tons Pb, and 1.54k tons Cu. The acquisition of Zimapan (currently under lease) mine and related assets is ongoing and subject to several conditions. The company's goal in 2021 is to continue optimization and increase production (primarily at Zimapan, namely the development of areas with higher-grade material). 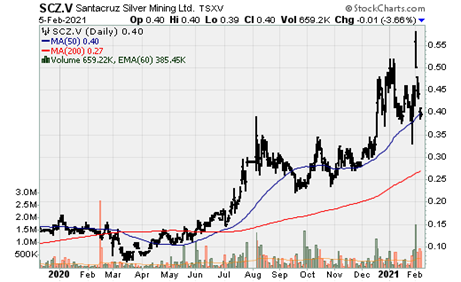 The company has a solid balance sheet with $204m in cash and equivalents and equity investments of $333.1m (it retains a considerable interest in New Pacific Metals). The company acquired a 26.99% interest in Whitehorse Gold for $1.3m, which has a fair market of $25.5m due to receiving 5.74m common shares as part of a spin-out transaction completed by New Pacific Metals and subscribing for $5.774m shares under a private placement. The company continued to look for growth opportunities after its failed bid to acquired Guyana Goldfields and won an online auction to acquire exploration rights of the Zhonghe Silver Project from the Henan provincial government of China, with the mineral rights transfer contract pending the clearance of the project area as not being in a military zone. Silvercorp also acquired the La Yesca Silver Project in Mexico. Silvercorp will take the same incubator approach it did with New Pacific Metals and spin-off the project into an independent company while maintaining a sizeable interest. Given its financial capacity, It wouldn't be surprising if Silvercorp made a material acquisition soon. 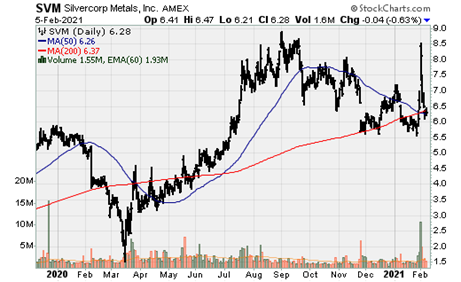 Silvercrest Metals: Announced the results of the feasibility study (FS) for the Las Chispas Project. While the economics are incredibly robust, this should be looked at as a starting point as the FS envisions a plant size of 1.25ktpd. It will likely be expanded to anywhere between 1.5-2.0ktpd. The FS is based on the highest clay samples encountered during the metallurgical testing, and if it is determined the clay content is lower than assumed, daily throughput could be increased. There is also an opportunity to complete a low-cost expansion to 1.75ktpd if reserve tonnage and mining rates allow. There remains significant exploration upside as well as resource conversion as there are excess M&I and Inferred resources that could be converted to reserves upon successful infill drilling. In other words, it is highly likely the operation ends up being larger than 1.25ktpd.

The mineralization at Las Chispas is nuggetty, leading to an over-estimation of grades, reserves, and resources. 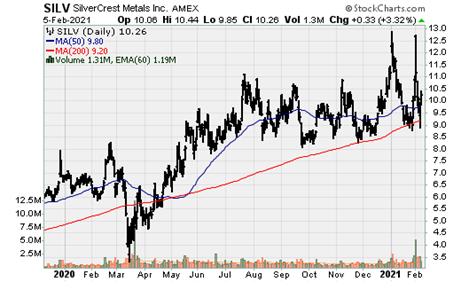 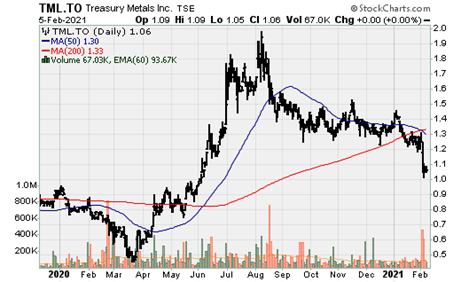 Vizsla Resources: Pleased to provide results from eight new holes at the Napoleon prospect at the Panuco silver-gold project. The results demonstrate high precious metals grades down to 320m below surface; a 180m step down from previously reported results. Highlights include: 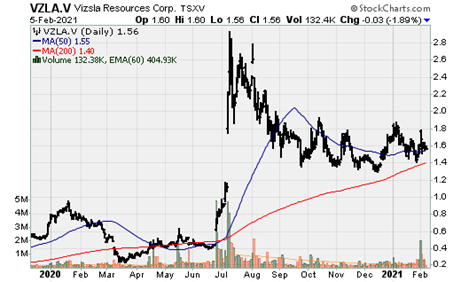