The Precious Metals remain weak, which looks likes it will continue through at least part of December. There is technical weakness in the gold chart, as well as silver to a lesser degree. On Friday, a shortened trading day, the banks smacked the gold price on a day of light volume, but the mining stocks finished flat to marginally higher. While this is a good sign (as the mining stocks often lead the metals), we need to see a continuation of this type of price action for several days on strong volume.

This week at Goldseeker.com, we've finished two more reports, both of which are on companies we believe have tremendous upside. Please try our 30-day risk-free trial or simply sign up for our free email list.

This week was quiet, which makes sense as companies often defer releasing positive news when the metals and mining stocks are in a down-trend.

Alexco Resources: Announced the commissioning of the Keno Hill District Mill commencing as scheduled, with initial production of concentrates underway. The initial ore source for Mill commissioning is the Bellekeno underground mine, where drilling, blasting, and extraction of ore from long-hole stopes continues. 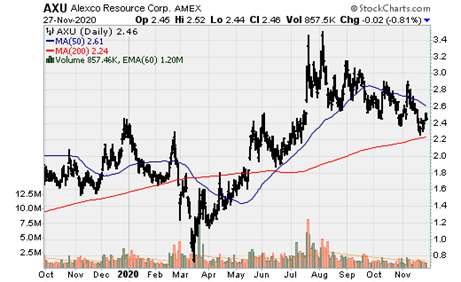 Argonaut Gold: announced that it had discovered four new, high-grade zones below or adjacent to the planned open pit at its 100% owned Magino property in Ontario, Canada: the Scotland Zone, the #42 Zone, the Sandy Zone and the South Zone, which sit between 350 and 700 meters southwest of the previously identified Elbow Zone. Highlights include:

The Magino project has the making of a long-lived, long-cost project of scale. There is still significant exploration and production upside and will be a company maker for Argonaut once built. 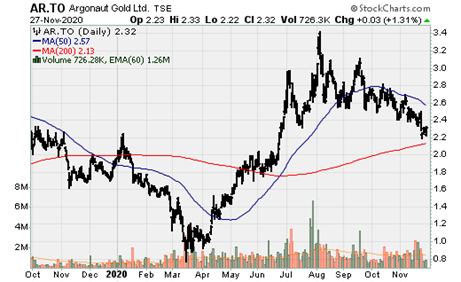 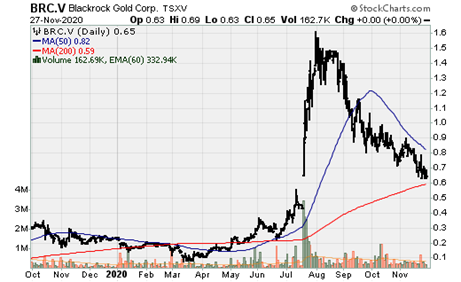 Caldas Gold: Announced C$85m subscription receipt offering and proposed change of board, management, and name. It commenced a private placement financing with a group of investors principally referred by Aris Gold Corporation that will result in changes to the management and the board of directors of the company and a change in the company's name to "Aris Gold Corporation." Once the financing is completed, Gran Colombia Gold is expected to become an approximately 45% shareholder of Caldas Gold. It will have the right to nominate two directors to the Caldas Gold Board after the Aris Transaction. Under the financing, the company has agreed to sell, on a non-brokered private placement basis, an aggregate of 37,777,778 subscription receipts of the company, at a price of CA$2.25 each, for aggregate gross proceeds to the Company of C$85 million. The financing is expected to close on or about November 27, 2020.

A highly experienced Board will lead the company with new nominees, including Ian Telfer as Chair, David Garofalo, Peter Marrone, Attie Roux, Daniela Cambone, and Neil Woodyer. Gran Colombia's nominees will be Serafino Iacono and Hernan Martinez. These are all competent leaders except for Daniela Cambone, which primarily did interviews with gold and silver experts, so most people are perplexed by this nomination. She is unlikely to contribute anything of value; however, the strong leadership from the rest of the board makes this immaterial. All on the BOD have numerous accomplishments except for that already mentioned.

The management team will be led by Neil Woodyer, CEO, with the corporate head office based in Vancouver, BC. This group of incoming Board nominees, management, and Strategic Advisor is planning to personally participate in the Offering for an aggregate of CA$38 million. 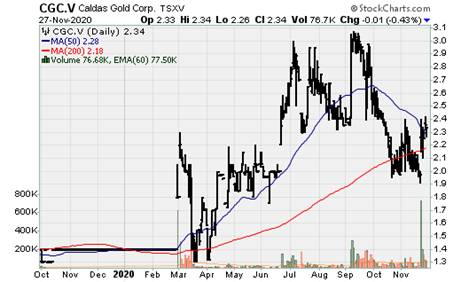 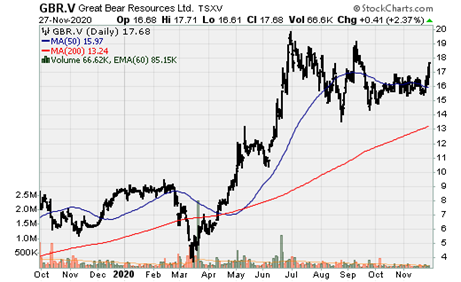 On November 25, Osisko Royalties and Osisko Development completed their previously announced spin-out transaction, which resulted in, among other things, Osisko Royalties transferring specific mining properties, including the Cariboo Gold Project, and a portfolio of marketable securities (through the transfer of the entities that directly or indirectly own such mining properties and marketable securities) to Osisko Development Holdings Inc., following which Osisko Subco and 1269598 BC Ltd. were amalgamated by way of a triangular amalgamation under the Business Corporations Act (British Columbia) to form "Amalco." Upon the Amalgamation, Osisko exchanged its Osisko Subco shares for ODV Shares, which resulted in a "Reverse Take-Over" of Osisko Development.

Management and Board Reconstitution (Osisko Royalties): 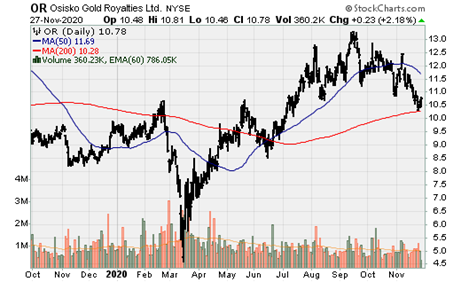 Northern Dynasty Minerals: The company received a negative federal record of decision on Alaska’s Pebble Project. If you’ve been keeping track of the company or the project over the last several years, this decision comes as no surprise and is the most likely outcome. The company received formal notification from the US Army Corps of Engineers that its application for permits under the Clean Water Act and other federal statutes has been denied. The lead federal regulator found Pebble's ‘compensatory mitigation plan' as submitted earlier this month to be ‘non-compliant', and that the project is ‘not in the public interest'. 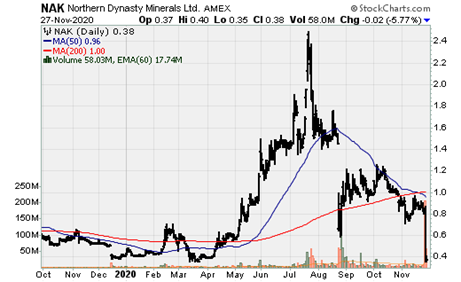 Northern Vertex: The company reported record quarterly production, revenue, and earnings from mine operations. The company produced 14.67k oz. AuEq (including 13.08k oz. Au), generating $26.8m for Q3. Cash costs and AISC was $954/oz. and mine-site AISC of $1,317 ($1,365/oz. companywide AISC). This was due to a one-time cost’s ties to the construction of the powerline, exploration, and heap leach pad expansion totaling $292/oz. The company ended the quarter with $12.10m of cash on hand. 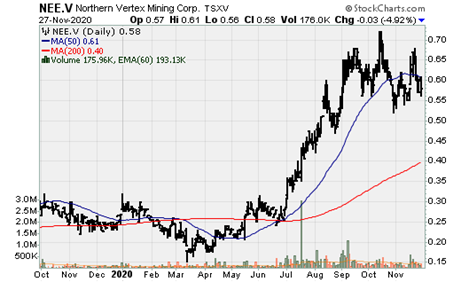 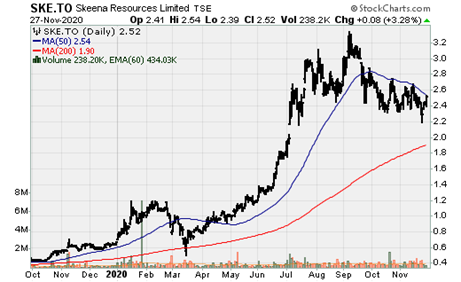 Vizsla: The company provided the first results from the Aguita Zarca prospect on the Corden del Oro Vein at the Panuco Ag-Au Project. Drill highlights include: 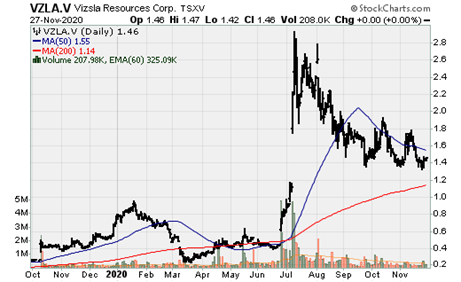 Wesdome Gold: Announced Initial Development on the Kiena Deep A Zone That Confirms High-Grade Gold Mineralization and Recommissions Mill. The development will provide an opportunity to confirm the geologic interpretation of the deposit, test for spatial and grade continuity of the mineralized structures, validate key assumptions of the mineral resource estimate, and assess the rock quality characteristics. This information will assist the ongoing Prefeasibility Study (PFS), expected to be completed by H1 2021, determining the restart's timing.

The Kiena mill has now been restarted and is currently processing waste rock and low-grade mineralization in preparation to process the Kiena Deep A Zone development material later next month. The development material will come from two zones, namely the A and A1 Zones. At this time, it is expected to process the estimated 6,000 tons of the combined zones. The milling results will be used to reconcile gold production with development muck and chip samples and reconcile the production with grade estimated by three-dimensional block modeling and the forecast ounces of gold, thus validating key parameters of the resource estimate. The resource estimate is currently being updated and is planned to be released this December. This resource estimate will be based on the ongoing PFS, expected to be completed on schedule in H1 2021. 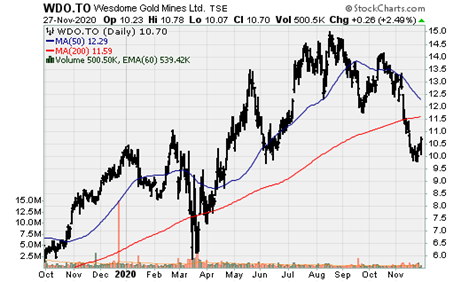