Gold, Silver And The “Sh*t-Show”

“I’m just gonna say it like it is – that was a shit-show.”  Dana Bash, CNN in reference to the “Presidential” debate.   “The debate was a national mortification – ‘shit-show’ was an understatement” – Chris Powell, GATA.

Last night’s debate was nothing short of a complete tragedy:  the tragedy of a collapsing empire.  I saw an ad on one of the financial propaganda cable channels that billed the debate as “The Main Event”  as if it were to be promoted like a championship boxing match.

Politicians and the political environment are nothing more than a reflection of the surrounding system and populace at large.  The entire U.S. system is a shit-show.  The financial markets have become so disconnected from the underlying economic and fiscal reality that it takes several trillion dollars in monetary intervention from the Central Bank to keep them from collapsing.

The stock market’s complete dysfunctionality is represented by the dozens of tech-related “unicorn” type companies that collectively burn billions in cash every quarter and yet have market caps in the tens of billions of dollars.  If anything, Tesla is emblematic of the degree to which the entire U.S. financial and political system is a complete fraud.

And then there’s gold and silver. The mainstream financial media dismissively reported the $950 million dollar fine to be paid by JP Morgan for manipulating the gold market.  But it was just some rogue employees “spoofing” the market. Spoofing is not the issue. The gold market  is, and has been for several decades, manipulated systematically to prevent the price of gold rising to a price level vs the dollar that reflects and embodies everything described above. “Spoofing” is nothing.  It’s the creation of derivatives with a notional value in the trillions to be used in large quantities to push the price of gold lower.  Here’s an example: 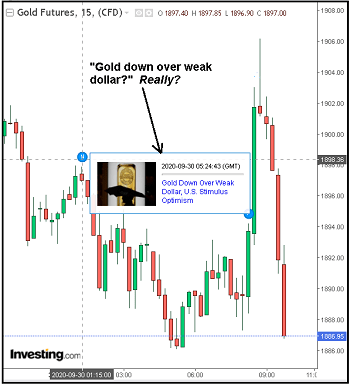 Part of the problem is that the mainstream financial media has become nothing more than hand-puppets for the Wall Street operators who pay their compensation by sponsoring their media abortion. They merely print the words fed to them. You’ll note that Investing.com is attributing the sell-off in gold this morning to a “weak dollar.”  Yet yesterday Investing.com told us that the big move higher in gold was attributable to a “weak dollar.”  See what I mean?  Zombie hand-puppets.

That price plunge in the graphic above has nothing to do with the trading action in physical gold. Or to spoofing.  It’s a product of the gold market manipulators like JP Morgan unloading a massive quantity of paper gold onto the Comex and  triggering stop-loss orders set by hedge fund black box trading systems just as gold was about to launch through $1900 again. A $950 million fine is the cost of doing business for JP Morgan. The Fed has injected billions into JP Morgan since March. $950 million is not a deterrent – it’s an odd-lot.

The Central Banks, with the help of their bullion bank phalanges, are desperate to keep the gold price in check in order to maintain the credibility of the dollar-based fiat currency monetary system – a monetary system in which trillions worth of currency can be created with a computer keystroke and that is 100% fraudulent.

Who benefits the most?  The primary target of the $3-plus trillion printed since mid-March are the big banks, which started to collapse last summer.  The phony “repo” operation implemented in mid-September is the evidence of that fact.  But the Government’s fiscal “shit-show,” a financial system held up by a currency printing press and an economy largely in a depression will lead to trillions more in Federal Reserve intervention.

The implication of the shit-show described above is that eventually the price of gold is going to move considerably higher in relation to all fiat currencies and, specifically, the U.S. dollar. You’ll never see Investing.com or financial TV report that the dollar has lost 98.2% of its value vs. gold since 1971.  But do the math – it’s a fact.  The loss of the remaining 1.8% vs gold is the what the western Central Banks are fighting to prevent. It’s their Maginot Line.  And it’s the eventual loss of that 1.8% that will send the price of gold measured in fiat currencies into orbit.

The short term gold chart looks as bullish as it has looked YTD. Last week’s sell-off was a gift to those who understand what is happening, why it’s happening and what can be done to protect wealth. Think I’m blowing smoke?  I put my money where my mouth is.  Last week, all week long as the gold and silver were pushed lower in price vs the dollar, I bought gold and silver bullion coins for the first time since early 2017 when gold was near $1100 and silver was around $16. On a relative scale, in which the “scale” is the severity of the shit-show,  gold and silver are cheaper now than in 2017. That’s why I converted more fiat currency into real money.

This chart is coup de grace:

The Central Banks are starting to lose their grip on that final 1.8%.  The value of gold relative to the U.S. dollar is beginning to accelerate along with the amount of systemic corruption, fraud and general perversion.