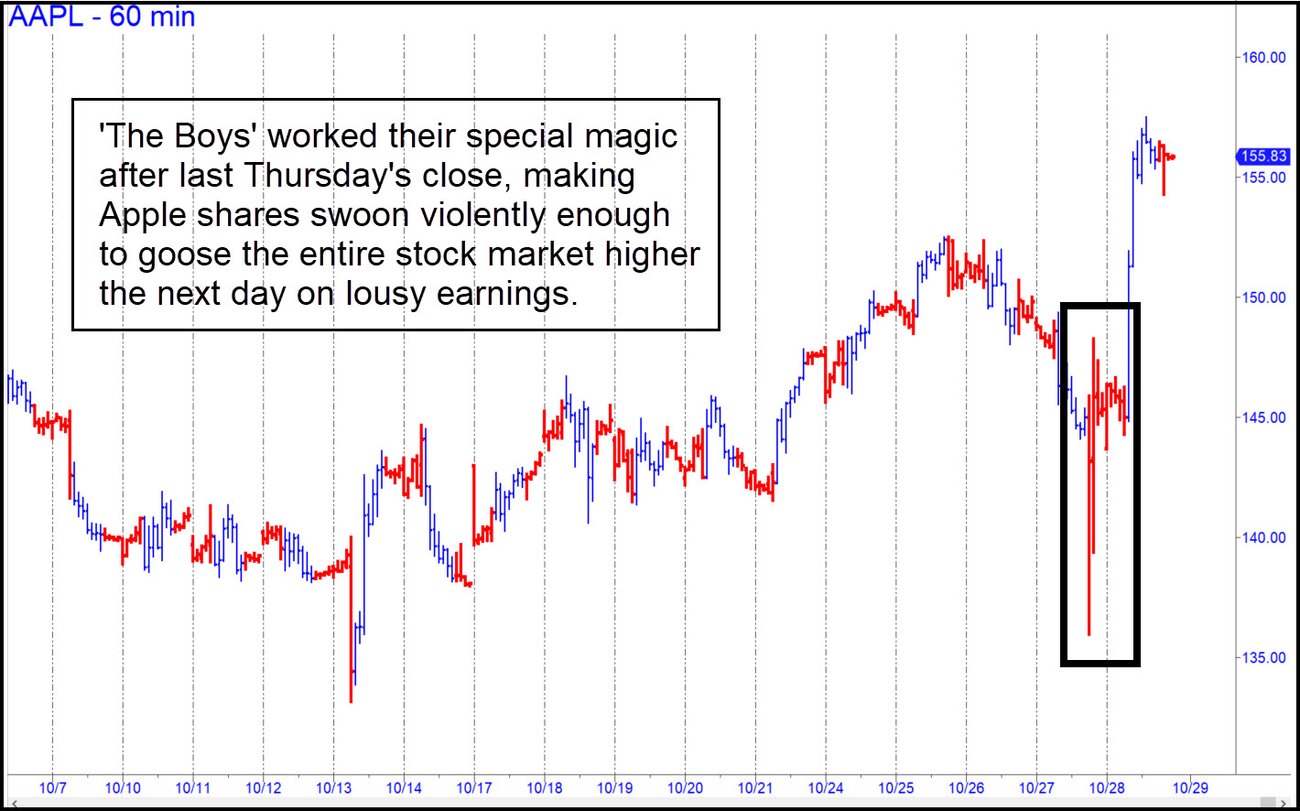 The thimble-riggers who control Apple shares have done a brilliant job holding the stock market aloft. Ingeniously engineered short-squeeze rallies in the world’s most valuable stock have helped sustain the illusion that the U.S. economy will somehow muddle through a deepening recession that is still disingenuously described by Biden and his economists as a ‘rough patch’. Unfortunately, factors that are about to bring the stock market and the economy crashing down are firmly in place and inured to happy talk. This is notwithstanding the carnival-midway shenanigans of trade-desk mechanics who are paid not merely to exploit big moves in stocks, but to create them.

This they accomplished last Thursday in AAPL to spectacular effect. The company is entering the most challenging retail environment it has faced in more than two decades, but you’d never know it from the way Apple shares faced down a merciless gauntlet of analysts that earlier in the day had mauled two FAANG stalwarts, Amazon and the company formerly known as Facebook. With 2023 shaping up for them as a bust, their stocks plunged in mere minutes by 21% and 25%, respectively. Apple couched its after-hours announcement more delicately, but only a fool would have ignored the devastating impact that simultaneous recessions in the U.S., Europe and China will have on iPhone sales.

Unsurprisingly, enough fools evidently did overlook the deep-purple clouds to provide AAPL’s handlers with perfect conditions to short-squeeze the stock 15% overnight, leaving it significantly higher than where it was before the news. This will give Wall Street a couple more weeks of breathing room to distribute stocks, since, with earnings for the most important corporate giants out of the way, the impact of downbeat reports from hundreds of other, much smaller companies will be muted.

The effectiveness of this subterfuge cannot be underestimated. It is borne of necessity, since Apple throughout the bull market has been the one no-brainer investment that portfolio managers could count on to provide not just a good living, but chartered yachts, Champagne and caviar on the Mediterranean. Get AAPL right and you get the market right. I’ve repeated this so many times that it has become my mantra. It predicted Friday’s powerful resurgence in the stock market, affirming AAPL's role as the best leading indicator we have for what the smart money is doing. [For more on my thoughts about the economy and a silent housing crash that is well under way, click here for my most recent interview with Jim Goddard of This Week in Money.]