How Mr. Market Could Fool Us All, Big-Time 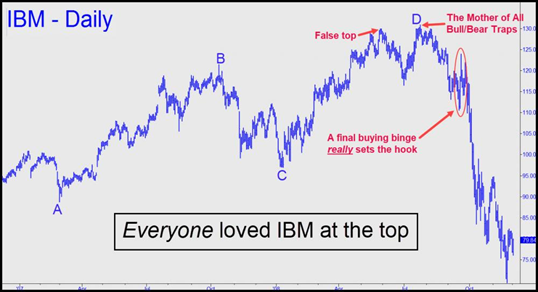 AAPL topped last week within a hair of an important rally target at 135.98, prompting this headline atop last Thursday's commentary: "Is This the Start of the Big One?" If so, it is long overdue. Valuations are worse, even, than at the height of dot-com mania, led by vertical spikes not only in AAPL, but in the shares of Tesla, Amazon, Chipotle, Google, Facebook and a few other world-beaters. Portfolio managers have thrown a mountain of Other People's Money at a relative handful of stocks that are deemed likely to flourish in economically challenging times. These geniuses keep dumping more and more money into the same few stocks because they evidently are clueless about what to do next.  This has caused the value of some big companies still doing brisk business during the pandemic to soar into the hundreds of billions of dollars, or even into the trillions. Crazy.

Throughout the mania, we've focused more on AAPL than any other stock simply because it is the one stock that no portfolio manager can be without. Under the circumstances, if a forecaster gets AAPL right, he gets the stock market right. Rick's Picks has succeeded well at this, remaining stupidly bullish against all common sense and logic. But last week's sharp selloff, coming at a time when most investors were already getting antsy about valuations, has many wondering whether it will mark the end of the party or just a healthy correction.

Labor Day Letdown
Our take is that the weakness occurred because too many investors had expected stocks to drift higher as they often do ahead of Labor Day weekend. However, there are a couple of reasons why we should assume higher prices will soon return. For one, the selloff generated too much bear-market buzz, especially among professional forecasters, to be the real thing. And for two, buyers were already back at it on Friday, putting a hardwood floor below the market that prevented the selling from snowballing.

Believers and skeptics seem evenly divided at present, balancing order flow in give-and-take fashion that could make the markets boring for another day or two. A memorable top like the one shown in IBM's chart (above) is more likely to occur when bulls and bears are both crazy-bullish. This would happen if the broad averages were to blast off later in the week to new record highs. It would make bulls more bullish than ever, but it would also cause bears, fearful of a runaway rally, to throw in the towel and cover their short positions. Although they would not be true believers in the rally, they would be thinking nonetheless that stocks, having shaken off their recent bout of weakness so quickly, were bound for the wild blue yonder.

Today's featured chart captures mass psychology as it played out in IBM in 2007-08. I use the chart as a teaching tool for the Hidden Pivot Course. You can see that things ended very badly for Big Blue's shareholders, but also for bears forced to cover at the top.  So diabolically seductive was IBM's last gasp that we can infer Mr. Market was intent on launching a bear market with a devastating collapse that would take everyone with it.  Even gurus blessed with the ability to predict major highs very precisely did not escape ruin, or at least embarrassment. Notice the peak labeled 'False top'. It came very close to a bull market target at 'D' that I'd sent out six months earlier. It came so close, in fact, that I was all but certain the bull market was over when Big Blue subsequently fell more than 12% in just a few weeks.

Setting the Hook
You can imagine how I would have been patting myself on the back at that point, since the top had occurred close enough to my D target to allow me to get very short at an apparent, major top. Then something very surprising happened: The stock whipped around and was soon challenging the old highs. Bears frantically covered their short positions, and bulls waxed ecstatic. Ironically, when the stock finally achieved my original D target exactly, I did not have the guts or good sense to get short again because I expected the breakout, powered by maniacal short-covering, to go much higher. Thus, when the stock pulled back from the marginal new record-high, I and everyone else misread it as a correction. Certain of this, we bought the stock as it fell. The next rally was spectacular, creating a spike on the daily chart that proved what geniuses we all were. We grew more bullish than ever, while bears succumbed once and for all. That's when Mr Market sprung a trap from which few would have escaped. The stock plunged from $124 to $79, adding to the incredible carnage of the dot-com bust. It was devastating for millions of investors, and it could only have happened if the crowed was dead wrong at the top.

The lesson here is that we should never presume to know what Mr Market has in store for us. If it were otherwise, we would all be rich and everyone's guess about where and how bull markets top, and bear markets bottom, would always be correct. Regarding last week's selloff, although it could be the start of a bear market or a major correction, I doubt it. We'll know more once we seen how stocks behave on Tuesday and Wednesday. Some key stock-bellwethers and the broad averages were poised to generate powerfully bullish 'impulse legs' with relatively modest rallies. If they shrug off last week's selloff in just a couple of days, as appears possible, we will see new record highs very shortly. It is then that we should be particularly careful, since a rally like that has the potential to set a trap that would put a fitting and shocking end to the craziest bull run ever.