How Mr. Market Could Set the Hook, Big-Time 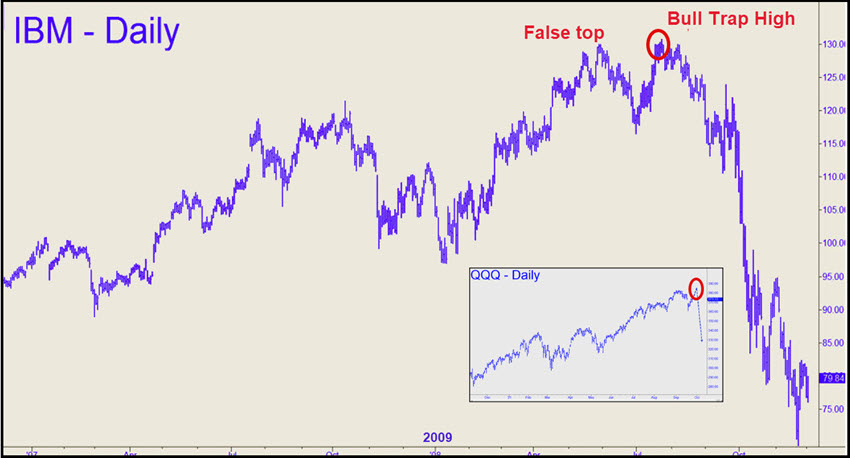 The chart above shows how bull-market tops are made when nearly everyone is expecting one. That's the case now -- for so many good reasons that I won't bore you with a checklist. Just take my word for it: the bull is dying. Most of the reasons the pundits are giving would have us believe the stock market is somehow connected to reality. I won't insult your intelligence with such claptrap, since you get enough of that on CNBC.  I'll simply mention my own reason for thinking the Big One has begun: The so-far all-time high in QQQ, a speculative vehicle that tracks stocks favored by the chimps and lunatics who pretend to manage your money, hit an all-time high at 382.75 on September 9 that came within three pennies of a target I'd drum-rolled back in January. Stocks have gone steeply downhill since, giving my magic number a fighting chance to nail it.

But perhaps not, or at least not yet. For if Mr. Market is going to set the hook as firmly as possible before taking no prisoners, it wouldn't hurt for him to push the broad averages, or at least the QQQ lunatic-segment of the market, above the September 9 top that has begun to look so promising to permabears. After such a nasty tumble as occurred last week, new highs could set up a knockout punch much like the one that occurred in IBM. The peak that I've labeled "False top" occurred in mid-2009, and it came within relative inches of a major Hidden Pivot target I'd disseminated to subscribers months earlier. Imagine the elation I felt when IBM dove sharply for eight weeks after getting within spitting distance of my magic number. Unfortunately, I was so busy patting myself on the back that I failed to notice the increasing vigor of the subsequent bounce. Just a bear blip, I figured. But I was wrong. The stock continued to climb until it no longer looked like corrective rally in a bear market, but rather an assault on the old high.

When IBM poked above that high, it accomplished two things psychologically: 1) it made bulls more confident than ever; and, 2) it gutted and disemboweled the very last of the bears, who threw in the towel with frantic short-covering. At that point buying power was exhausted, since bulls were all-in and bears were financially and mentally depleted. You can see what happened next: IBM began to fall, sucking in investors who at least for a while must have thought they were 'buying the dip'. It took a few months for the ugly truth to register -- i.e., that they had been buying into a bear market. The very steep, two-week avalanche that followed in late September reflects this epiphany. Study the chart carefully and let your imagination tell its own story about what investors were thinking as the bloody carnage unfolded. Could it happen again? You be the judge.