13 hours 33 minutes ago
COT Silver Report - August 12, 2022
1 day 21 hours ago
Was $18 Silver the Bottom? Next Pivot? - Lawrence Lepard
3 days 1 hour ago
Silver Coin Premiums – Another Collapse?
3 days 23 hours ago
The End Game for Silver Shenanigans...
4 days 23 hours ago
The Fed Is All Talk, and JPMorgan Trial EXPLAINED - Chris Marcus

Inflation: The Little Mouse that Roared

The last time I included a particular indicator of where temporary inflation and permanent inflation are headed, the indicator had risen in rather threatening manner to look like this: 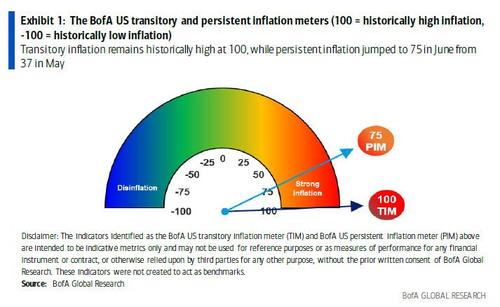 I said to expect higher. Today it rose the rest of the way to look like this: 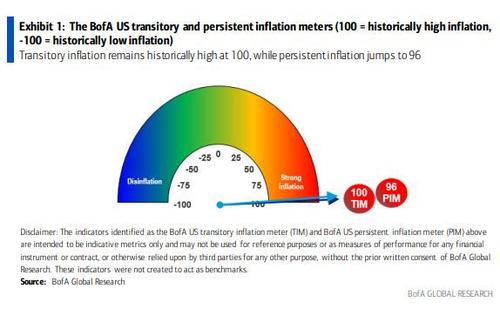 At the time, I said the anti-inflationistas, who were predicting inflation would start to fall (that it was “transitory”), were wrong, except under the most absolute meaning of “transitory,” because the biggest part of CPI is housing, and it, I noted, was just about to roar. Owner’s Equivalent Rent is the most laggardly of CPI components, and it, I predicted, would start to rise quickly … right now.

Core CPI ticked up another quarter of a percent in just one month due primarily to Owner’s Equivalent Rent soaring to a 0.43% increase per month and rent on primary residences rising to 0.45% per month. OER, the true sloth in CPI, more than doubled what it had been a month before.

While used-car prices were finally a drag on CPI under the “transitory” category of components, the Manheim Used Car Index just soared to a record high, which indicates the next CPI report will show transitory inflation rising again, as well as permanent inflation.

With inflation skyrocketing, no wonder real yields on junk bonds are pricing negative. They are not rising in yield fast enough to keep up with inflation. 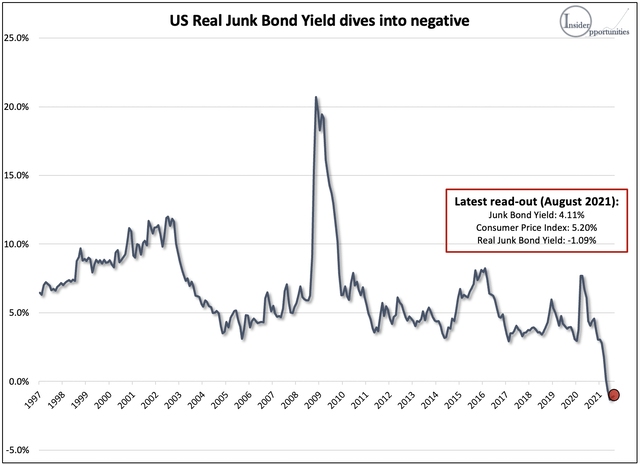 Yields, adjusted for inflation, reveal how much the bond market is ignoring inflation. And why would it do that which it historically never does? Well, with treasuries, the answer is stunningly simple and, yet, missed by almost every bond expert out there. When it comes to treasury bonds, the Fed owns the bond market because it buys more than half of all government bond issuances. That means it sets the price where it wants the price.

That control, of course, will fade as the Fed tapers its treasury purchases, which will allow price discovery to slowly creep back into the moribund treasury market as more and more of each issuance has to be soaked up by the market sans Fed.

That, in turn, will mean a bond-market implosion in 2022. I’ll make that another prediction, but only with the caveat that the Fed will chicken out for certain as bond yields start soaring and possibly even before total implosion happens.

Unfortunately for the Fed, inflation will remain hot on its heals; so any move back away from tapering its bond purchases is a move to keep fueling inflation — at least for as long as shortages persist, likely longer as some things become vicious self-feeding inflation vortices. That could create a worse form of chaos as bonds may then wrestle with who to follow — the Fed or assured mutual destruction by inflation.

Now, as to why junk bonds are pricing so low that factoring inflation in takes their rates negative, I’d say they are just following the lead of the treasury market where all experts are failing to say anything about how the market is not pricing in inflation because the market is only pricing where the Fed decides to price it (yield-curve control). They are BELIEVING inflation will be transitory, in spite of the indicators above, because they bizarrely continue to believe treasury yields contain accurate price information and mysteriously fail to realize all price discovery was drained out of the treasury market a long time ago.

The bond market, in other words, is foolishly continuing to believe the Fed’s transitory narrative, even though inflation is not believing it at all. Expect such lame thinking to fade away as Fed treasury bond purchases fade away and then to slide quickly as realization grips the entire bond market. Suddenly there will be no buyers remaining. 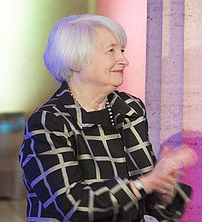 Janet yellin’ at the moon

Yet, only today, former Fed Head Janet Yellen started saying that inflation is not likely to be persistent, as it will end sometime in the latter half of 2022.

Hold it? Did Yellen just redefine “transitory” as meaning “lasting for a couple of years?”

Well, we know how accurate the current Fed head was when he said last spring that the inflation, which had already started running out of control from the the fall of last year, would start to fade this past summer because supply-chain blockages and shortages would start to ease as people went back to work. Here we are well into this fall, and those problems, which have never been worse in my lifetime, are still growing, yet Yellen calmly maintains they’ll be done by next fall.

I don’t think we’re about to lose control of inflation…. As we make further progress on the pandemic, I expect these bottlenecks to subside.

In the absolute sense, all things are “transitory” … someday. I guess that is why Janet just came to rescue by attempting to redefine “transitory” to mean “lasting only for another year or so.” As if that were not enough time to destroy stocks, bonds, and the economy.

However, the Tweeter-in-Chief, and by that I do not mean Donald Trump who was forced to resign from that role on Twitter about a year ago, but Jack Dorsey, the CEO of Twitter, just cheeped,

Hyperinflation is going to change everything. It’s happening…. It will happen in the U.S. soon, and so the world.

It will be anything but cheap.

Of course, Yellen isn’t the sharpest knife on the Christmas tree. She’s the one who confidently assured the world that the last round of Fed tightening would be so easy it would happen on autopilot and be as “boring as watching paint dry.”

Clichés are thought to help when one is trying to be reassuring because they have that comforting ring of familiarity. Unfortunately, that particular expression now has a ring of alarm. The familiarity runs the wrong way for former Fed heads now that it reminds us of how the Fed was totally caught off guard and dead wrong about its last round of tightening. It reminds us of how the Fed had to lose face and faith and how it had to quickly reverse course in 2018, lest the stock market continue crashing into oblivion and the global economy get sucked down in its undertow.

It is now an expression that should send a shudder down your spine just as Halloween approaches. Envision Gramma Yellen riding her witch’s broom across the pale moon, crowing in a long droning voice something like, “We will not lose control!” or “All things are transitory! Ye, he, he, he, heee!”