18 hours 27 minutes ago
The Short Position in SLV
1 day ago
Here Is Why Silver Demand Will Climb to a New Record High! - Keith Neumeyer
4 days 1 hour ago
This Is Why NOW Is the Perfect Time to Buy Silver - Garrett Goggin
4 days 1 hour ago
Rico Charges Dropped On Silver Manipulation Trial
4 days 23 hours ago
Has Inflation Been Defeated?

It's the Old 'Flight to Safety' Story 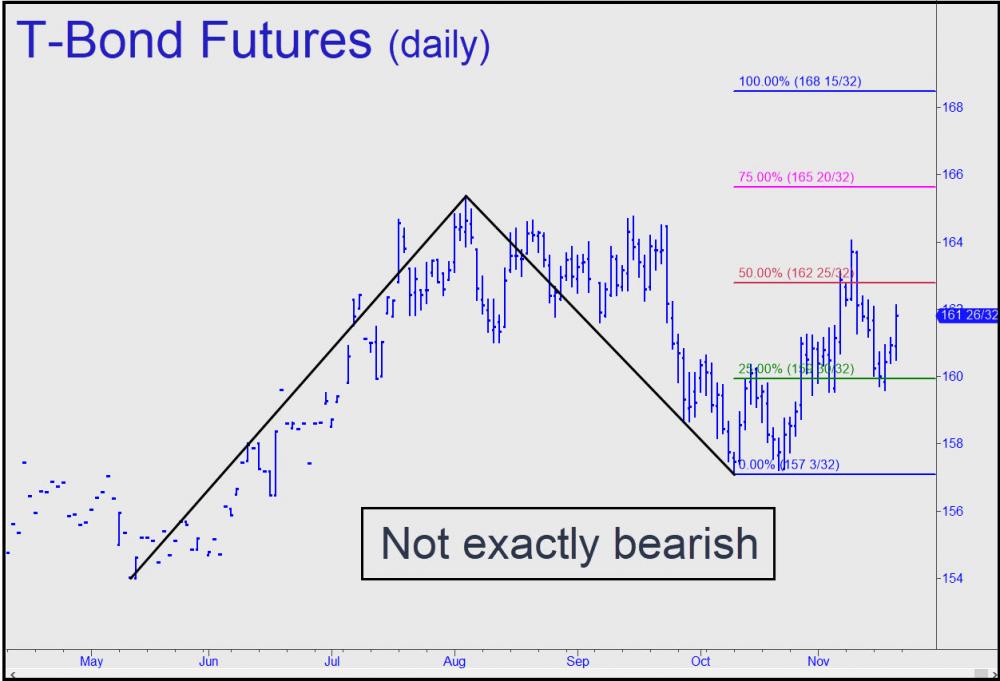 Did you notice last week's tone change? The whole, eternally benighted world of pundits, economists, Bloomberg news producers, forecasters et al. had been disbelieving the bond rally as the Fed's ultimately unredeemable portfolio of Treasury debt has grown from merely massive to intergalactic in size. Now the talking heads are having to change their tune in order to catch up with charts that have been no worse than neutral on T-Bonds for months. So what "story" are they telling themselves to explain what they were unwilling to see back in January? Simply that we are witnessing a global "flight to safety" as Covid threatens to tank the economies of Europe and China yet again.

Of course, nothing says "safety" like the whole world piling onto the brittle edifice of U.S. debt. Trust your instincts: This trend cannot end well. In the meantime, the technical outlook calls for at least somewhat higher T-Bond prices and correspondingly lower yields. On the long bond, that would imply a descent to 1.70% from a current 1.91%. If that level is breached we could see 1.54%. At some point, the lower rates accompanying a bear market in stocks will be seen as reflecting not a flight to safety, but as a manifestation of the catastrophic deflation that has been bearing down on the financial planet, steadily gathering size and strength since the S&L crisis of the early 1990s.

While economists have kept busy trying not to acknowledge that T-Bonds are moving in the wrong direction, a rising dollar has equally confounded them, as well as investors who bet on inflation. Although lower yields are ostensibly benign, albeit symptomatic of the coming deflationary bust, a strong dollar is capable of wrecking the global financial system overnight. I've written here before about the prospect of a massive short-squeeze on dollars that are fundamentally worthless. This could happen if something that initially will be spun as a hiccup in the banking system causes short-term lenders to stop rolling their loans. The exquisitely complex bank clearing network -- the same one that enables ATMs to spit out $20 bills on demand -- will seize up instantly, and everyone in need of money will discover that the digital dollars the Fed creates so effortlessly are actually quite scarce in hard form. If you've got that shoe box full of $5s, $10s, $20s and $100s stashed away as I've advised, hold onto it, for it might prove useful when the banks fail to open one day in the not-so-distant future.