Treasury Secretary Janet Yellen sent markets into a tizzy on Tuesday when she said interest rates may have to rise to keep the economy from overheating with all the government stimulus. But later in the day, she walked those comments back, claiming inflation isn’t going to be a problem and insisting that she wasn’t suggesting or predicting rate hikes.

Yellen’s flipflop is telling. Even if inflation is an issue (and it is), there isn’t a darn thing the Federal Reserve can do about it.

Yellen made her first comments during an event hosted by The Atlantic magazine. She warned that all of the government spending coming down the pike could cause the economy to “overheat.” That’s code for “it could cause price inflation to surge.”

It may be that interest rates will have to rise somewhat to make sure that our economy doesn’t overheat, even though the additional spending is relatively small relative to the size of the economy.”

Yellen’s comments spooked markets that are already worried that the Fed might tighten monetary policy sooner than later to deal with increasing price inflation. Tech stocks in particular were hammered after Yellen’s talk.

But the Treasury secretary walked back her comments later in the day. She told a Wall Street Journal CEO Council event that she doesn’t anticipate an inflation problem and she parroted Federal Reserve Chairman Jerome Powell’s mantra that any price increases will be “transitory.”

Yellen was asked directly about her earlier comments and she insisted she was neither recommending nor predicting a Fed rate hike, appealing to the central bank’s mythical independence.

“If anybody appreciates the independence of the Fed, I think that person is me,” she said. “I don’t think there’s going to be an inflationary problem. But if there is the Fed will be counted on to address them.”

I think she’s wrong on both counts. There is an inflation problem and the Fed can’t do anything about it.

In a tweet, Peter Schiff said that’s exactly why Yellen walked back her comments. 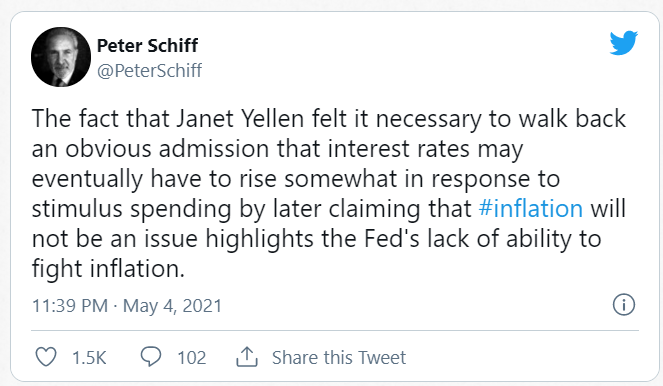 There has been an inflation problem for quite a while – from the moment the Fed starting printing trillions of dollars out of thin air to monetize trillions in government spending. And we’re now starting to see the impact of that inflation on prices.

Anybody who has been to the grocery store, the gas station, or Home Depot has experienced big price increases first hand. The question is: are these really “transitory” price hikes due to supply chain bottlenecks as the economy reopens and a return to normal oil demand, as Yellen insists?

She had better hope so.

Because despite her assurances, the Fed can’t be counted on to address them given the state of the economy.

The very fact that the markets threw a fit at even a hint of rate increases bears this out. Can you imagine the carnage on Wall Street if the Fed actually raised rates? This bubble economy is predicated on artificially low interest rates and running up debt. This economy can’t run on higher interest rates. That’s exactly why the central bank is keeping them artificially low, and why Powell and Company desperately want us to believe that they won’t have to take action to deal with inflationary pressures.

Yet despite their best efforts, we’re still seeing rising rates on the long end of the bond yield. They spiked again after Yellen’s pontification. In fact, Reuters quoted a TD Securities interest rate strategist who tried to give Yellen cover by pointing out rates were already rising.

She was actually asked about the growing share of government spending to GDP and she was asked a very economist question and she answered in a very economist way, where interest rates to yields might have to rise a little bit for the reallocation of resources and the market read that as rates will have to rise. But I think they’ve already risen. They’ve gone from 1% to where we are now, so it’s certainly quite a bit already. I don’t think it was meant to be an impactful statement that yields will have to rise now.”

And therein lies the rub.

The US government can’t afford rising rates. And it certainly can’t have the Fed tapering its bond purchases. In fact, I would argue Uncle Sam is going to need the Fed to step up its quantitative easing in order to monetize the additional borrowing that’s looming in the future. Biden and his fellow Democrats in Congress can pretend that all of this proposed spending will be paid for by tax hikes, but they are living in fantasy land. The government will pay for Biden’s infrastructure plan and the “American Families Plan” the same way it paid for all of the coronavirus stimulus spending.

It will sell bonds.

That means the Fed will have to keep buying bonds with money printed out of thin air in order to keep the bond market from completely imploding.

Earlier this week, the Treasury Department upped the amount of money it plans to borrow in the second quarter. And not just by a little bit. In February, the Treasury projected borrowing in Q2 would come in at a relatively modest $95 billion. The new estimate for second-quarter borrowing is $463 billion. Then, in Q3, Uncle Same will nearly double that, with estimated borrowing of $821 billion.

And I guarantee you there will be more borrowing after that. That’s the only way the government can feed these ballooning deficits.

The borrowing and spending tell you all you need to know about the trajectory of interest rates. They’re staying right where they are – inflation be damned. In fact, both Powell and Yellen have cited low interest rates as the reason the government can make all of these “investments” in the economy.

The Fed is boxed into a corner. Powell knows it. Yellen knows it. But give them props – they are putting on quite a show trying to assure us everything is fine to keep the markets calm. It reminds me a little bit of the orchestra playing as the Titanic sinks.