March 05, 2021 Stock Market as Forward Looking as a Caboose
February 07, 2021 DON’T-STOP GAME STOCKS: Bankrupt Companies As Trillion-Dollar Chips in the Wall Street Casino
January 20, 2021 EPILOGUE: A Night to Remember at a Palace Beside the Sea
January 18, 2021 Nothing to See Here, Folks. I Mean, Literally, NOTHING.
January 03, 2021 The Great Reset: Leaning into 2021 Money Storm

MAGAnificent! The Economic Truth or Terror is Known at Last

What does MAGAnificent America look like now that it’s here? Does America really feel greater after the last four years? Be honest now. Be really honest. From where I stand, America has never looked worse in any year of my life! That’s a statement packed with facts. 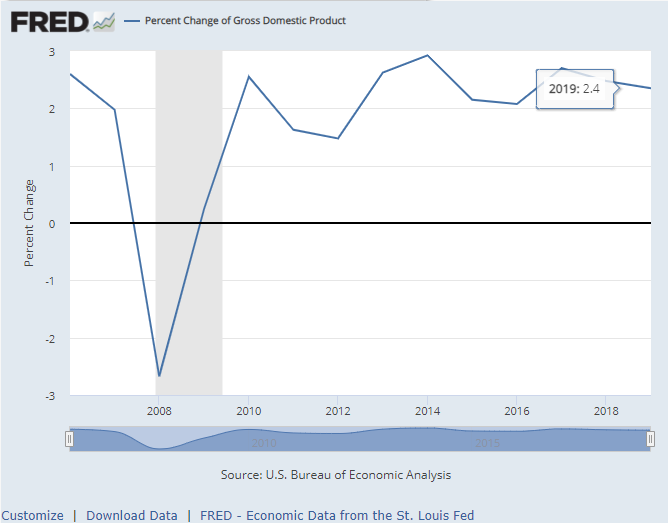 One of the big lies we are currently told by Trump’s remaining congressional allies and staffers, which I’m getting particularly sick of, is that we should remember his great accomplishments. Let’s look at those that are often claimed by Trump in his endless boasting. Outside of his unhinged stock market, which has been soaring, America’s economic decline was already relentlessly happening before COVID, as I frequently pointed out throughout his last two years.

Remember Trump’s GDP growth rate prior to COVID? Trump’s average, excluding his anomalous and worst COVID year, because he can’t be blamed for that, was 2.57% AND FALLING! Obama’s average for all years he was in office, excluding his first Great Recession year, because that was handed to him by George Bush on the way out of office so he can’t be blamed for that either, was 2.16%.

That minimal 0.4 point difference erodes to nothing when you consider Trump’s last pre-COVID year, which was supposed to be greater than ever, had settled back to 2.33% for the full year average, and 2.1% for its last quarter. It was falling, falling falling before COVID. The difference is particularly meaningless when you consider the massive breadth of economic destruction Obama had to dig out of throughout his first term.

Here are the Fed facts:

Let’s be fair: We did NOT get much bang for the buck out of Trump economically. There is not much to show in exchange for the most massive deficits in history, which were created specifically to stimulate growth (or so we were told). Those deficits were set in place as far as the eye could see even before COVID hit. (Or were they really created just to make rich people richer faster?)

Was Trump’s boasting about the greatest job market ever … ever merited? He boasted that he brought jobs back to America. Show me on the graph below where the drop in unemployment as a result of Trump improved over the drop that was already consistent throughout Obama’s two terms: 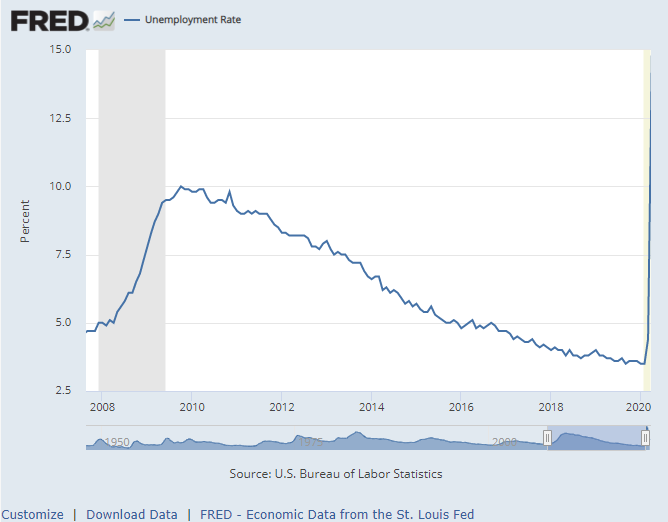 I’m having a hard time seeing the great Trump improvement.

Remember that year of continually declining business sales and revenue growth before COVID? If you don’t remember my pointing that out throughout 2019, here is a graph showing what business leaders believed was coming well before COVID based on what they were seeing in their businesses: 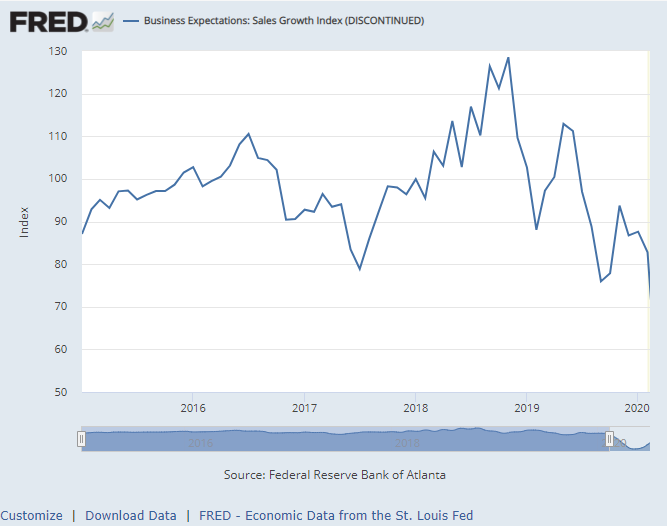 Remember the Repo Crisis? Remember how the Repocalypse couldn’t be killed without more and more return to the QE polices of the Obama era? Do we really need massive QE if the economy is, quoting Trump, “the best economy ever?” Really?

Remember the exploding expansion of the already rapidly growing gap between the rich and the rest?

Are we less violent? Happier with each other as fellow Americans or do we hate each other more and more? Are we happier with our own lives?

Are we more respected anywhere in the world? Do we respect each other more? Even our own families who stand opposite of wherever we stand politically?

Has the military-industrial complex seen its imperial growth wounded? Or did it constantly fill the White House top offices and get more budget expansion than ever? What war did Trump actually succeed in ending, as he promised? Just today the Pentagon announced it will not be carrying out any of Trump’s proposed troop drawdowns.

Trump might, however, have managed to stoke a civil war by endlessly throwing gas on the rage of his followers and poking and stabbing at his detractors and critics and speaking for four years in the most incendiary ways he could think of. Instead of a troop drawdown, what we actually end with is an additional 25,000 soldiers all over Washington, DC, and guarded state capitals. He lit the country on fire, but for what gain? How is America better? Actually better?

Does the nation truly look any less swampy today than on the day Trump entered office? Does Goldman Sachs have any less influence over government and especially the economy and taxes?

Is your health insurance cheaper? Better coverage? Not mine. It is more expensive than four years ago and provides worse coverage with higher copays.

Are our trade relations stronger and healthier and more profitable for us? (Already Mexico is accused of cheating on its deal this week, and wait until you see tomorrow’s article if you think trade deficits have improved with China).

Have we even achieved fewer illegal border crossings? Nope: 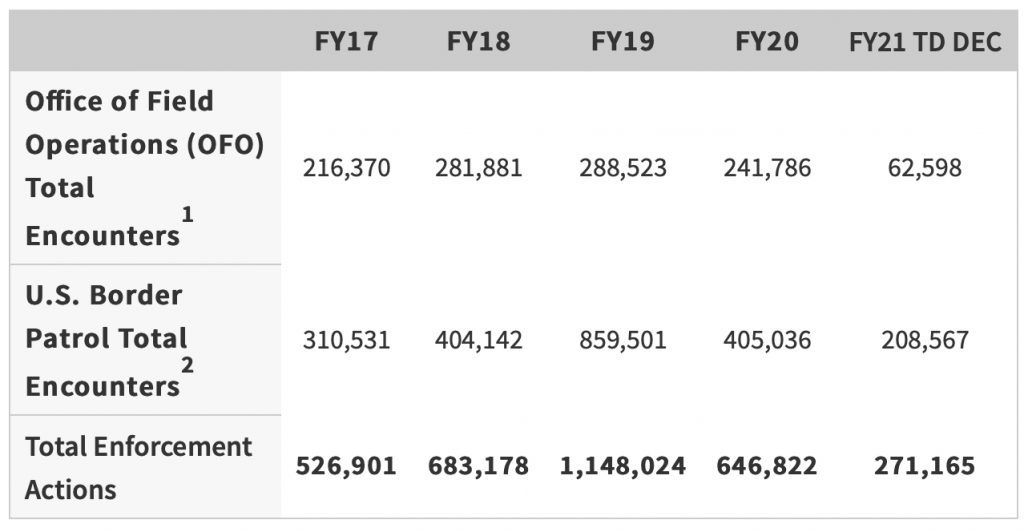 In fact, breaking that down, you can see that the number of attempted illegal Mexican border crossings is not one bit lower than during most of Obama’s years: 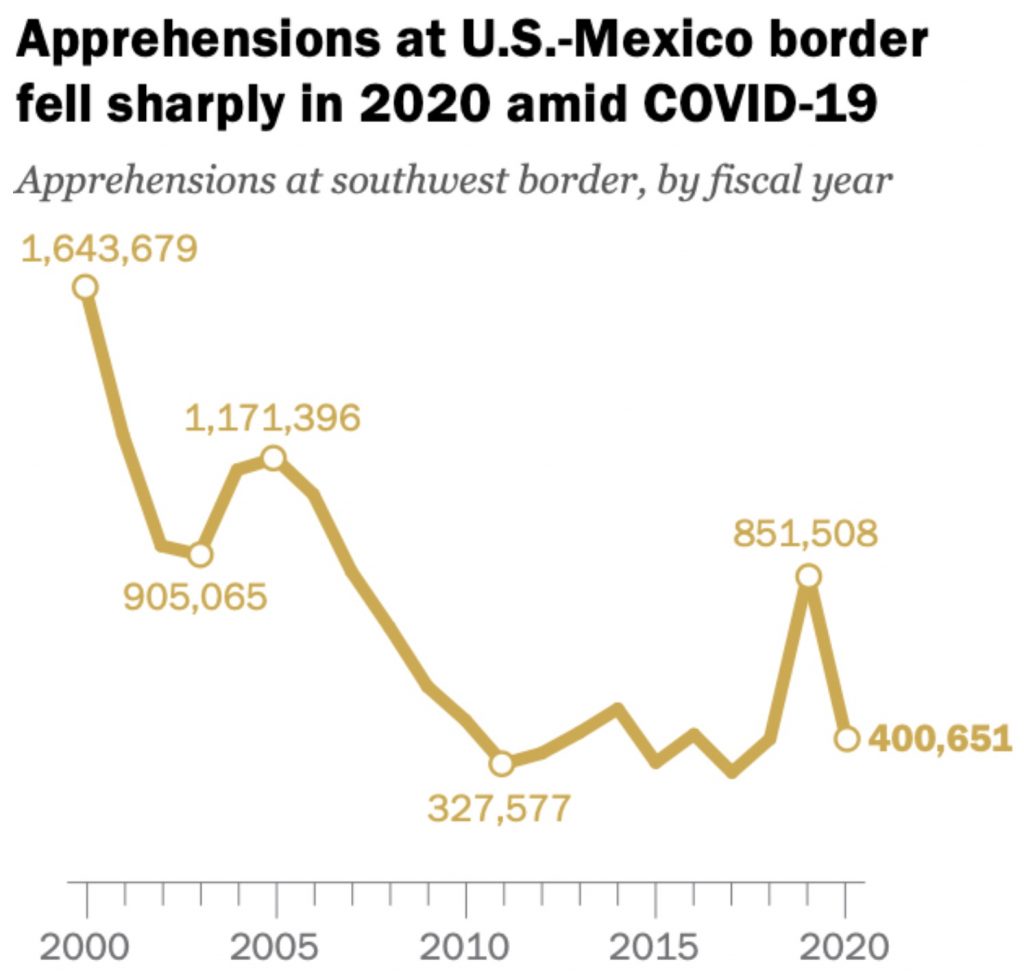 I know. Don’t crash people’s fantasies with facts. Well, like them or not, there they are. Not even any improvement in illegal border crossings. It’s time to deal with reality and drop the denial.

Now, had we done something truly smart, such as push through legislation during Trump’s first two years — when Republicans held all branches of government, instead of holding none thanks to T-Rump — to jail people who hire illegal aliens and to strip alway all welfare for illegal aliens, migration would have reversed itself with all illegal aliens transporting themselves as quickly as possible back to Mexico in order to find jobs. We also wouldn’t have a huge ugly wall destroying everyone’s riverfront view along the border and bugging the animals.

That would have been a brainy solution, instead of a testosterone solution. Has anyone watched the Mexican wall-climbing races to see how effective the Bravado Solution is? It’s amazing how fast they can scoot up that hideous eyesore. This, of course, is what I wrote with great certainty the result of the wall would be before Trump was elected, while the solution I presented above is one I’ve advocated here for many years and would have cost Americans nothing: Stop the welfare for Illegal occupants of the country, and arrest and fine the people who hire them, instead of trying to capture all the aliens. That way you arrest one person and solve the problem for the future, instead of a hundred who will be replaced in the future by a hundred more wannabes anyway. The best part is they’ll take themselves home.

How about that cabal of global bankers? Did he take them down? Did they start to have less influence over America after he appointed Powell to run the Fed and put Goldman’s Munchkin in charge of the treasury as Powell’s partner? Or are the banksters taking him down by swearing they will never loan to him again? Did the bailouts for banks and big businesses first and foremost over all mankind end? Or did they just silently happen allll over again?

I have never seen America less great than it looks today! As of January 2021, days before Trump leaves, America looks to me like the fall of the Roman Empire. In fact, I cannot think of one thing about the America I interact with on a daily basis that actually looks and feels greater and/or happier today than it did four years ago!

Tell me why I should feel better about America now than I did in the final days of the Obama era. Show me how that 4-D chess against the deep state worked out the greatness of America that so many people kept assuring me was coming in a masterful Trump move, while saying I was a moron for not being able to see it was playing out. Where is it? Show me where I’m wrong in the facts above.

Trump failed bigly at all the things he most assured us he could and would do. The 4-D chess excuse eventually got expanded to 40-DDD chess to explain away the endless things that looked a lot more like fails than like they were going as Trump promised. (You know the “hold your enemies closer” excuse to explain why he kept putting the old establishment (the swamp!) in charge of everything if he was REALLY the anti-establishment guy he told you he was.) Now we know where it went! Trojan Trump was used to wheel the entire establishment inside the White House gates.

I never saw a swampier White House, filled with the MIC and the banking cabal’s top executives.

The deep state couldn’t be more fully in power today than … well … if Trump had planned it and had filled the White House with deep state characters on purpose. Hmm.

Show me the masterful play that ACTUALLY took down the deep state, not in your fantasies (if you are one who still believes in Trump) but in provable reality because I’m sick from years of unreality and denial. Somehow I missed the day the music died for the establishment. Show me that great successes I can look at and feel. I don’t care about the fantasies anyone believes are still (always STILL) GOING to happen. Show me the real stuff. Hard facts. Where’s the beef?

I’ll respond back with honest answers about whether or not MY life is better in those respects. Maybe yours is, but mine sure isn’t. I’ve given you stocks from the get-go when I acknowledged that point at the start of the article, but the rising market is meaningless to me because it is a helium balloon floating over an enormous cavern that will swallow it whole in its downdraft and probably soon. For now, it’s better, so I’ll give you that one … for now.

4 hours 26 minutes ago
AbraSilver Intersects Substantial High Grade, Near-Surface Silver & Gold Mineralisation Including 81 Metres Grading 541 g/t AgEq (7.21 g/t AuEq) at Diablillos
22 hours 9 minutes ago
Where Is Silver Going?
23 hours 14 minutes ago
Ted Butler: A Time to Act
1 day ago
Silver Seeker Issue #53 ~ This Week in Mining: Gold Trying to Find a Bottom..
1 day 12 hours ago
Here's how the bullion banks rig the silver price (your lawyer will love this one!)