Today we watched a video of the Chinese demolishing dozens of high-rise apartment blocks per government mandate, the video is here.

Here is a story from Reuters with a video on the topic of Evergrande preparing to file for bankruptcy.

Some readers may be old enough to remember when investors feared that China was wasting money by constructing apartment blocks and cities that would never be used.

Circa 2011 this debate over ghost cities drew interest from all over the globe. The phrase Ghost City was a dramatic way to say that people could drive for miles amongst these brand-new apartment towers in which not a soul was living.

China’s centralized, communist-based structure and lack of property rights made it possible for the government to expropriate the homes. Also, the land which existed before construction started.

And some even applauded the government for building affordable housing. Which would later be used by millions of people moving from the farms into cities for factory work.

Government Interference in the Economy and Money Printing

It was well known that local government officials wanted to demonstrate the vitality of their economy through the demonstration of continually higher GDP figures. Thus did whatever it took to make sure that these projects were built!

These ghost cities helped fuel China’s GDP double-digit GDP growth. This growth came at a cost though –  the misallocation of capital due to government interference is now starting to crumble.

When exports are much higher than imports, companies deposit foreign currency into their Chinese banks. Those banks then hand out local renminbi which circulates within the economy. 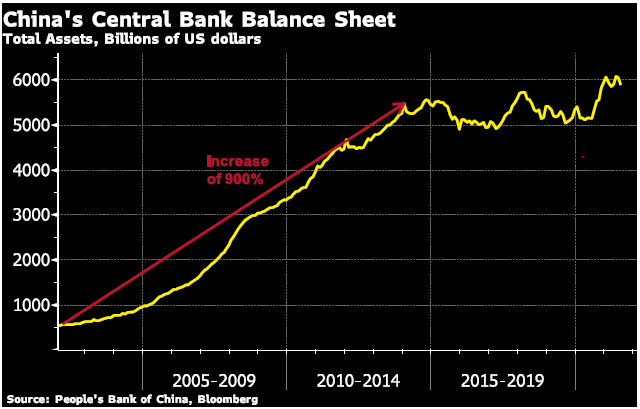 Government interference in the economy and money printing isn’t like eating rotten sushi. When rotten sushi is consumed, the consequences are felt almost immediately.

When it comes to money printing and government interference causing harm to the economy, there is no puking on the same day like with rotten sushi. It can take decades for the consequences fully felt.

Government interference and overreach are very visible in China’s controlled economy. But it is very prevalent in other economies as well.

The continued printing and reach of the central bank aren’t going away anytime soon.

Chinese government officials would do whatever it took to meet their goals, and the ECB (European Central Bank) President Draghi’s infamous “whatever it takes” speech of 2012 is very much the same story.

Not only does the ECB continue to operate by this principle. So does the Bank of England, the US Federal Reserve, and Bank of Canada.

The WSJ reported this week that there are House Democrats pushing for Biden to “reimagine a Federal Reserve focused on eliminating climate risk and advancing racial and economic justice” when making the decision on the Federal Reserve Chair when Chair Powell’s term is up in February. The politicians or bankers who fund these previous mistakes are never around when the truth comes out and buildings get blown up.

Effect of Money Printing on the Economy

And government statistics rarely get the update to reflect the wasted money and effort spent many years before.

Do you think some government economists in China will go back into the archive?

Reduce the GDP bump circa 2011 enjoyed by the construction of those buildings now demolished? Neither do we.

But that is the main point of money printing. To hide the current dire situation, spending today what should be saved for tomorrow.

Since no one in government ever takes time to account for the past wastage. They are never forced to reconcile the track record of bad decisions against the mantra of fake it until someone else is left holding the bag.