December 01, 2021 Federal Reserve Finally Admits it was Wrong about Inflation — NOT Transitory!
November 29, 2021 “Let them eat tofu”: Federal Reserve Combats Inflation at Thanksgiving with Unpardonable Diet Advice
November 21, 2021 The Stock Market Does Have a Tipping Point Where Bond Interest and Inflation Both Matter A LOT
November 12, 2021 The Inflation Death Spiral has Begun: Inflation Hits Stocks, Bonds and Government Like a Bomb Cyclone
November 08, 2021 Warning Signs of Recession in GDP and Especially its Components

Nothing to See Here, Folks. I Mean, Literally, NOTHING.

Every couple of months, I bring us up to date on how the economy has changed, and the last couple of month have taken us predictably back into economic decline, following a summer burst of subnormal passableness that never got us out of the crater we fell into last spring.

Retail sales circled the drain like a dead bug for the third month in a row after having fully recovered from their initial COVIDcrash. Of course, sales in brick-and-mortar stores remained below their pre-covid levels all year. The odd factor in December’s plunge, however, was that online sales were down almost 6%, month on month. 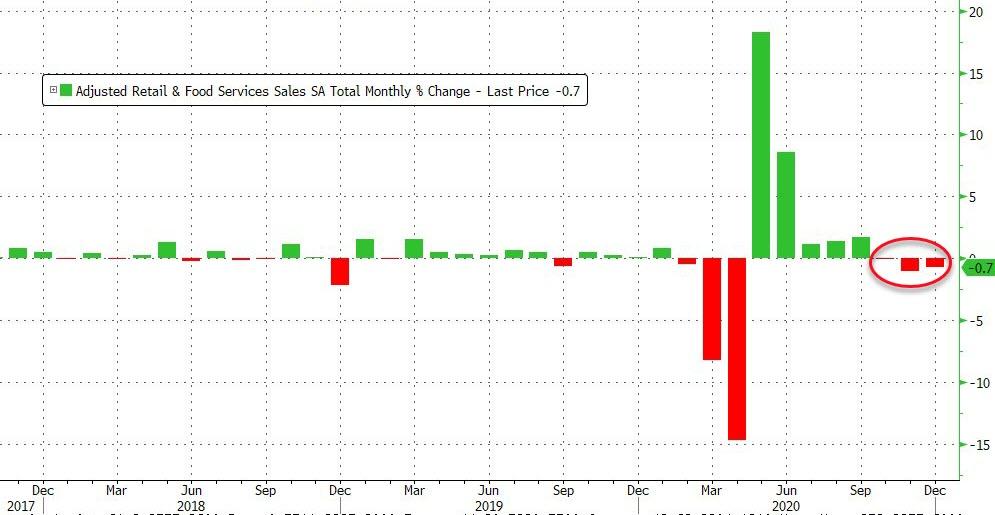 New vehicle sales put the brakes on, re-establishing a steepening descent that set in on November 2017: 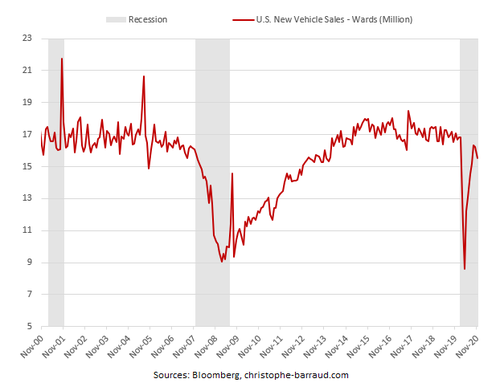 Consumer spending fell 0.4% in November, its first drop since the April when the Coronacrisis was about at its worst. That’s not surprising since personal incomes dropped an average of 1.1% in November, the third drop in four months as a result of various government relief programs being allowed to expire.

US industrial production still looks like we’re tunneling our way up out of deep coal shaft. It now matches up to what would have been a declining trend line for production that began in 2018, due in good part to the Trump Trade Wars. 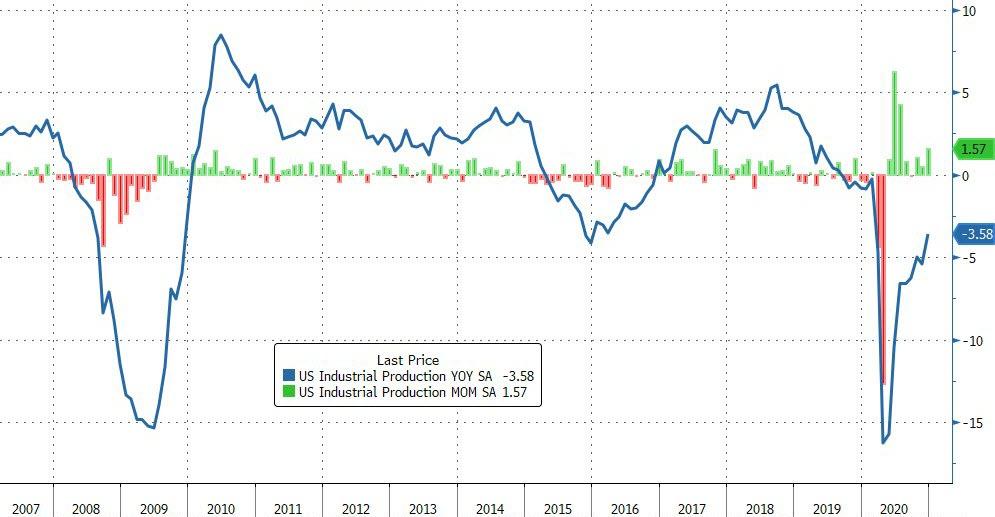 And where did those trade wars leave us? With a Chinese trade deficit that is now the worst it has ever been! The conclusion of the trade war is that it brought a big improvement … for one nation: 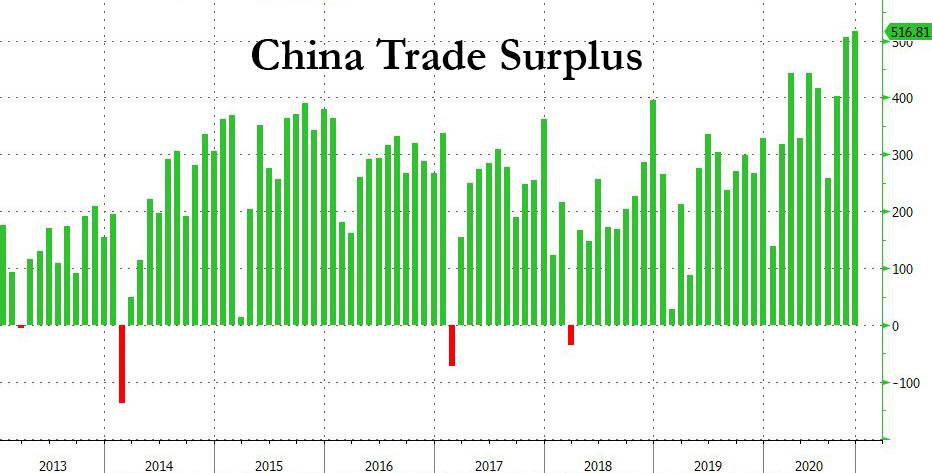 For the full year, the Chinese trade surplus with the U.S. was $317 billion, 7% higher than in 2019: not exactly what Trump had in mind when he started his fight with Beijing.

The best part is that, in the final analysis, analysis shows that Chinese companies offset almost none of the US tariffs by reducing the price of their products, which means Americans paid for almost all of the tariffs (just as they did with Mexico). The repeated claim that China was paying this tax was just one more Trump lie among thousands of big lies. I noted that likelihood along the way, and now we know it turned out as I said. But, hey, “trade wars are easy … so easy, just you wait and see …” and wait and wait and wait.

Maybe, if we had been smart, and fought only one trade war — the most important one with China — we could have gotten other nations to team up with us and force China’s hand since they also had issues with China. However, when you take on World Trade War I in all theaters of the globe at once, you’ve got no allies in the fight.

But, at least, our farmers went broke faster than any time since the Dust Bowl of the Great Depression. So, MAGA!

Fortunately for tired consumers, the Fed still couldn’t get its preferred inflation gauge back up to its 2% target, in spite of months of talk about allowing inflation to run hot. US producer price inflation has stalled correspondingly, which will tend to suppress consumer inflation in months ahead. 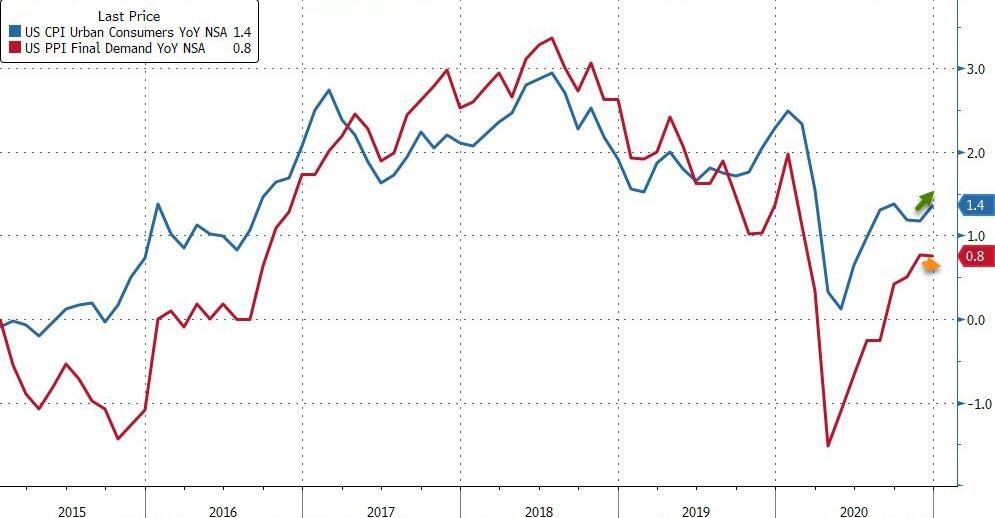 Bankruptcies of major US companies scaled old heights in December to finally hit their 2011 levels with 16 major companies filing in December. The fourth quarter in total became the worst quarter for major bankruptcies since 2009, the pit of the Great Recession. The annual total of 243 major bankruptcies (over $50 million in size) is also the highest since 2009. The pain won’t end until the beatings are discontinued, which will be well into 2021 at the earliest.

Unemployment is now climbing a wall again as a result of all these business downturns over the fourth quarter (to the extent that it the quarter been reported so far). Job losses jumped for their first handhold on the wall in the second week of December, rising to 885,000 newly unemployed compared to the previous week’s 862,000 new applicants. Those numbers dropped off a little in the second half of December but then scaled their way up to 965,000 in the first week of January. (Prior to COVID the normal number of new unemployment claims each week was about 225,000.)

As a result, continuing unemployment claims have also begun to rise:

“The tidal wave is coming. It’s going to be really horrible for people,” Charlie Harak, a senior attorney at the National Consumer Law Center, told the Post. “The number of people who are now 90 days behind and the dollars they are behind are growing quite significantly.”

Let’s finish with the good news. There has been some reprieve for the oil industry because …

I mistakenly said in my last post that bankruptcies had not been as bad as I predicted in the oil industry. I’ve been so caught up in the political insanity of the past two months, that I was unaware of recent milestones reached. Once I researched it, I realized oil bankruptcies became worse than ever in the fall, but the oil industry is getting a bit of temporary reprieve at the moment from a recent slight recovery in shipping. These bankruptcies just haven’t been in the news because the news, too, has been totally absorbed with the political chaos of the last two-and-half months.

The reprieve isn’t likely to hold because, even if demand remains via online purchasing, so many bottlenecks have formed in container shipping due to COVID and trade wars that the system keeps jamming up. However, even the trade wars aren’t holding up well. Trade surpluses on the China, as said, are way back up with exports from China to the US up 21%, but not just because of the Phase One deal.

Shipping rates are back to rising, and the Port of Los Angeles, jammed in the fall with empty containers, is flowing again. The container jam happened because container ships were coming into the US at full load with major shipper Hapag-Lloyd saying they were “deploying every available ship,” while exports remained way down.

Orders for new big trucks are way back up, and so are oil prices. Interstate miles in trucking are up more than 9% year on year. BNSF reports a strong increase in intermodal rail transport. (Some yards are up 20% in volume YoY.)

Whether you see a decline in home sales as good new or bad news depends on whether your looking to buy a home or sell one. Home buyers have become strained because of a COVID migration that has accelerated prices higher. For those feeling priced out of the market, that appears to be slowing down, though that may just be the normal winter slack

Single-family home construction rose its highest since the housing-market summit in 2007, trying to fill the earlier explosive demand of 2020 for new homes. In spite of November’s slump in demand, median new-home prices rose another 2% in November because it typically takes several months of falling demand before prices start to follow.

Of course, none of the above has been keeping the stock market from rushing to peak insanity: 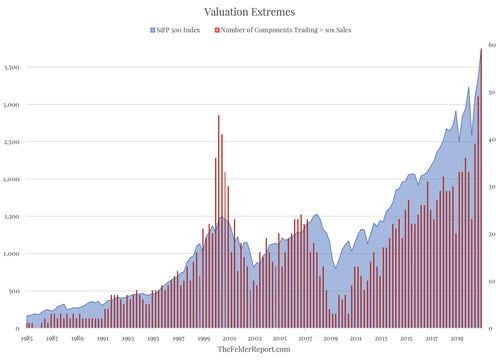 Imagine when that Jenga tower falls! But, hey, Jumpin” Joe is here, and for the moment the market has been happy. That infatuation may wear off before the honeymoon even begins; but, hey, the stock market gurus all told you late last spring that we’d be returning to normal by the spring of 2021 to justify the high prices being hit in the late spring of 2020. I seem to recall saying, “Not at all likely.” Now the stock market gurus can shift to telling you that, because the stock market presciently prices in the future, today’s high prices are really fine because we’ll be back to normal by fall.

To top it off, at half-a-trillion dollars, the US budget deficit for the first fiscal quarter just came in 61% higher than the already scorching previous year … and it’s about to rise even faster as Joe manages to pass all the stimulus under the new Demo-run congress that Trump wished he could.

Imagine when that tower of debt falls!