Oh, What a Difference a Day Makes

After hitting the highest official inflation rate in 40 years, bonds did exactly what I warned of in my last Patron Post where I said,

The collapse of the Everything Bubble will be an economic supernova. Think Lehman Bros. and Bear Stearns and all the rest of what happened to cause the great recession, then raise it an order of magnitude.

We got our first Lehman taste in this collapse today when the 2YR US treasury delivered the biggest rush in bond yields since Lehman Bros and Bear Stearns: 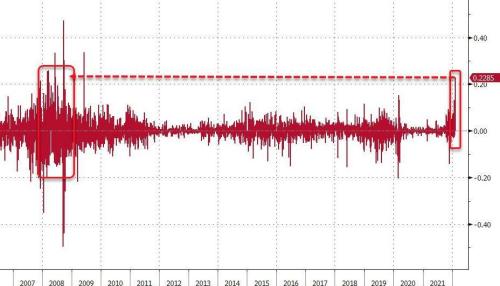 We pointed to the stunning move in 2Y rates which jumped by 22bps – a move the kinds of which we last saw when Bear Stearns wasn’t fine.

That move looks even more extreme when rated in context of the other months around it: 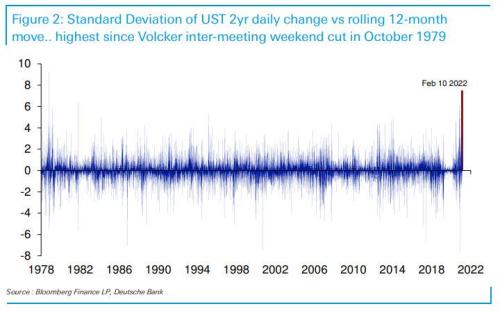 Compared to the rate changes over the past twelve months, it takes us back to the Volcker days when the Fed was taming the inflation they had created in the seventies.

Yesterday’s was the biggest “shock” since October 1979 when Volcker announced his intentions on the world (a couple of months after taking office) with an inter-meeting weekend hike.

At the start of the month I had noted,

…and now the bond vigilantes are taking over the Fed’s work and forcing their own Volcker-sized moves in interest rates. I made the following observation about that in a comment on that same article:

I doubt our multifarious bubbles will even survive the taper because tapering is tightening in an inflation environment where bond investors are being rapidly let loose from the Fed’s tight QE grip as vigilantes. They are already raising interest rates for mortgages ahead of the Fed doing any lifting, and they are still pretty tightly bound.

Volcker’s move was made as an inter-meeting hike because the situation couldn’t wait until the Fed’s next regularly scheduled meeting to make the interest hike. Today, the Fed announced it has just scheduled an “expedited closed meeting” of the board between its regular meetings for this coming Monday (Feb. 14):

As a reminder, the last time the Fed scheduled an emergency closed meeting for “review and determination … of the advance and discount rates to be charged by the Federal Reserve Banks” was back in 2015, and this was the outcome: 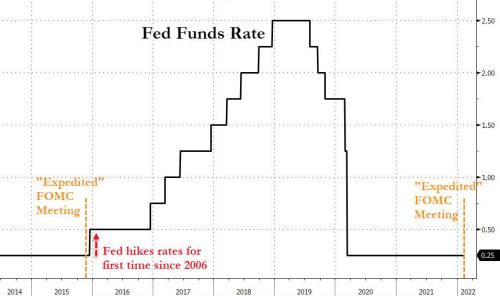 The Fed’s made its first rate hike back then after it had completed a gradual, year-long period of tapering QE less than half the size of the QE it has piled-up now!

I find it a bit too coincidental that this coming Monday’s closed emergency meeting was called right after following Fed concern that I reported yesterday:

St. Louis Fed President James Bullard, said the Fed now has more reason than ever to jolt markets with an initial 50-basis-point hike in March and maybe even an intra-meeting hike between now and March and to start quantitive tightening (balance sheet reduction) in the second quarter, rather than the third.

Now, Bullard’s reasons for a meeting might not be why this unusual, emergency session has been called. You may remember closed emergency meetings were also used during the Lehman days of the Great Recession to bailout crashing financial institutions; however, I would suspect Bullard’s statement about the need for an intra-meeting rate hike is the more likely reason. Bear in mind, the big bankers that gather at these meetings don’t like being called to Washington like this if they can possibly avoid it when they were only there a week or so ago, so these meetings do truly only happen in crisis situations. What a day!

There is another thing that happened in one day yesterday when bonds spiked that might have gotten the Fed’s sudden interest. The US yield curve took the biggest backbend toward flattening in I don’t know how long:

I had just warned in my Patron Post two days before this sudden flatting happened,

One other insidious aspect of the bond bubble blowing up is that the yield curve for bonds is now rapidly flattening as bond vigilantes seize the reins on the bond market that the Fed is releasing. That flattening presages a recession…. markets will start pricing in the inflation that they were locked out of pricing by massive CB interference; so, expect the repricing of bonds to happen quickly (in a realm of normally glacial moves in interest) and yield curves to flatten quickly and all of that to roil a lot of markets.

Here is how Zero Hedge summarized what just happened:

The bond market has gone on tilt with yields blowing up especially on the front-end in one of the most memorable one-day curve flattenings in history.

For treasuries, it all added up to the worst start of a year … ever … and by far! 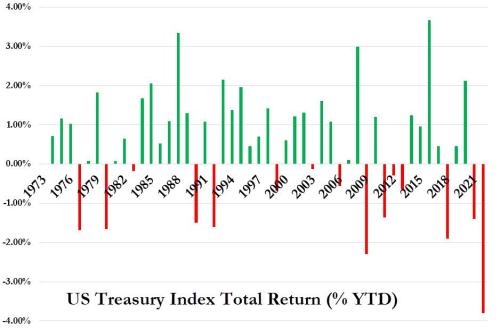 I also made the following observation prior to yesterday’s move in that Patron Post:

The interaction of other markets with bond rates is why we have already seen stocks starting down into a bear market of their own, too…. We’ve already seen that every time bond yields rise quickly, stocks tremble and fall; and the Fed hasn’t even begun to withdraw money from the nation’s money supply….

Yesterday’s flattening of the yield curve definitely roiled the market:

The abject manipulation of the Plunge Protection Team and whoever else is pumping stocks up in sudden bursts also appears to be failing. We’ve seen some big attempts, but they haven’t held. Today, bond yields lost some of their levity, but do you know why? Besides the intensified White House warning about a Ukrainian-Russian war created a large rush of money out of stocks, which poured into bonds to find the closest thing to what investors believe is a safe haven, but that haven is far from safe right now if they bought into bond funds. Once again, the movements down in stocks matched up perfectly with the moves in bonds. In this case, the outpouring from stocks were the pressure driving the move. Yesterday it was the raising of yields that were the suction.

I explained that interaction of stock and bond markets recently, too, saying we’d see the money flow from stocks to bonds by this dynamic:

I’ve called it the seesaw relationship between stocks and bonds, but you can also think of it as an old-fashion pump handle where as the handle is pressed down, the plunger goes up, forcing water to flow. In this case we are pumping from one pool — the stock pool — into another — the bond pool.

It works like this: Bond prices go down as the Fed pushes down on the pump price handle by backing out of the treasury market (which forces yields to rise to attract additional buyers as the Fed ceases to be the buyer of first resort). The rising yields draw money flows from stocks into safer bonds with improving yields (lower prices) until the bond price handle finds a bottom (yields stop rising, prices stop going down). The money flow is being pumped from the stock pool into the bond pool. Then, as investors make bond purchases at those bottom prices, they are slowly lifting the bond-price handle back up with their increased demand for bonds (lowering yields). Then the Fed backs out of more bond-buying again in another step of tapering and pushes the bond-price handle back down for another pump, lifting bond yields on the other side of the fulcrum; thereby, pumping more money from the stock pool into the bond pool.

By that dynamic, bonds don’t just keep rising; however, every time they rise and lower, they are pumping money out of stocks and into bonds … or other safe havens. It is that money flow that temporarily lowers bond yields again until the Fed takes its next step in backing further out of bond purchases, pushing down on the price handle. By the time the Fed is done, the flow of money from stocks is so continuous it may continue to syphon money from stocks to bonds even when the Fed is done pumping. We call this fear. At that point, the money keeps flowing out under its own pressure.

“The Money Pump is Working to Drain Stocks … and There is No Safety Shutoff!“

The bond vigilantes’ money pump is working pretty well right now while other stock-pumping manipulators that try to move money into stocks like the Plunger Protection Team seem to have lost their prime.

I also showed a graph depicting how closely the top-seven stocks have hugged the aggregate expansion and contraction of global central-bank [CB] balance sheets, and how those leaders have now formed a huge overhanging cornice at the top of their snow-capped summit that is starting to break off: 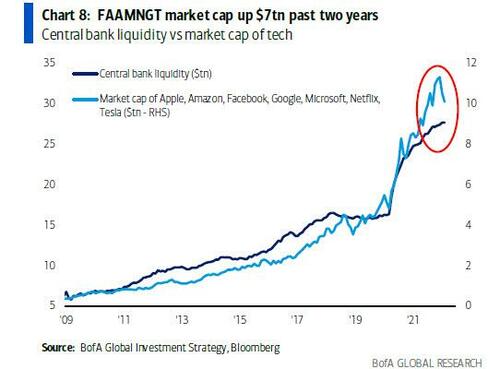 Look at the catching down US stocks have to do now that CBs have begun slowing the expansion of their balance sheet. Then remember these CBs promise to soon begin to shrink their balance sheets further away from stocks, sucking money supply out of the world everywhere at once, and giving stocks even further to fall to catch down. Tell me that won’t be a race to the bottom! You can see the high-tech portion of the stock market, which has been the only thing floating the major indices above bear-market level, has some substantial catching down to do, even though it has already made good progress … thanks in particular to last week’s Faceplant. However, they are going to be chasing a falling balance of CB money when the central banks begin actual tightening.

With the NASDAQ having fallen just shy of 400 points today (down 2.78%), you can see how fast they are trying to catch up with the rest of the fallen pack. Oh, what a difference a day makes! And then the next one … and then the next one. Pump up, pump down…

[Note: Those who support my writing gain access to all Patron Posts — past and present — throughout the time they remain a patron at the $5/mo. level or above.]