This is not moderately above 2% by any stretch … This is well above 2% … and, of course, we’re not comfortable with that…. This inflation … is larger than we had expected or than anybody had expected…. To the extent it gets longer and longer, we’ll have to continue to re-evaluate the risks.

— Powell, from the video below

Powell also said in his congressional testimony, when asked what tools the Fed has to curb inflation if additional planned government spending takes inflation even higher, that the Fed’s tools are to raise interest rates and take money out of the economy. The Fed has been assuring congress for some time they have the tools they need. What they are not candid in saying is that they cannot use those limited tools without crashing the recovery.

Always the tools we have in financial policy is to raise interest rates [and] to tighten financial conditions more broadly … and that’s how you get control of inflation.… That’s what we’ll do when and as we need to.

(about 43 minutes into the video)

However, using those crude tools would crush stock and bond markets that have already shown themselves sensitive to taper talk. So, if inflation runs hotter for longer, the Fed will have to kill the recovery as the only means it has of wrestling inflation to the ground.

Powell even stated that the inflation we have today is unique in history and said candidly that the Fed isn’t sure how well it understands the current situation.

We’re humble about what we understand. We’re trying to understand both the base case and also the risks.

If the Fed is willing to humbly admit before congress that it may not even understand the kind of inflation we are experiencing because it is without precedent, then let’s not be too ready to believe they have this under control when their only two tools to combat inflation are a skull-crushing club and a broad axe. As, I’ll lay out later in my own video interview below, even a delicate use of these tools could be catastrophic under our present equally unprecedented debt loads.

Assessing the Fed’s ability to understand today’s unique inflation, one congressman noted how Fed officials have created skepticism about their ability to see what is happening with inflation this year by repeatedly playing a game of catch-up-to reality, stepping up their underestimated inflation predictions much more slowly than inflation has been rising.

The “inflation is transitory” meme

Powell tried to stake the Fed’s claim that inflation is transitory on the basis that all the over-reach in inflation is due to airlines and hospitality and automobiles, which are particularly facing reopening crunches because they were the sectors of the economy that got crushed the worst by the COVID lockdowns. He said the concern for the Fed would be if inflation spreads more broadly beyond that limited scope.

So, another congressman laid out for Powell a long list of areas where inflation is already spreading more broadly with rapid rises in food and minerals and energy. To this Powell responded,

I think we’re experiencing a big uptick in inflation — bigger than many expected, bigger than I expected, and we’re trying to understand whether it’s something that will pass through fairly quickly or whether we need to act. One way or another, we’re not going to be going into inflation for a long period of time because, of course, we have tools to address that…. We don’t want to use them in a way that interrupts the rebound of the economy.

Sure, the Fed has those two tools — raising interest rates and removing money from the financial system — but, as Powell avers, using them will crush markets and the economic recovery we’ve had since COVID. He, of course, words its gingerly as “interrupt” because he knows all financial writers hang on every nuance of every world the Fed chair speaks. Regardless, if stimulus pushes inflation higher for longer, Powell is admitting the Fed will have to not only stop stimulus, but reverse it.

We’re very well aware of the risks for inflation. We’re watching very carefully…. If we see … the path of inflation moving up in a way that’s troubling, then we will react appropriately.

Asked if he was concerned about this, Powell responded,

Night and day we’re all thinking about that and really asking ourselves whether we have the right frame of reference for understanding this.

So, how much time does the Fed have to figure out if its massive experiment of record money printing during a time of scorching inflation that already exceeds anything the Fed anticipated is going to go awry?

Powell also admitted that the “bottlenecks” that are the basis for the Fed continuing to hope (let’s not call it “believe” anymore) that inflation will be transitory are “happening everywhere in the world.” I wonder how the Fed can believe bottlenecks all over the world are going to resolve in time for the Fed to avoid slamming the brakes on economic recovery with it big tools when inflation is already well in excess of what the Fed anticipated.

So, again, how much time does the Fed have?

Bank of America’s newly revised temporary and persistent inflation indicator has an answer for that: “Not much!” 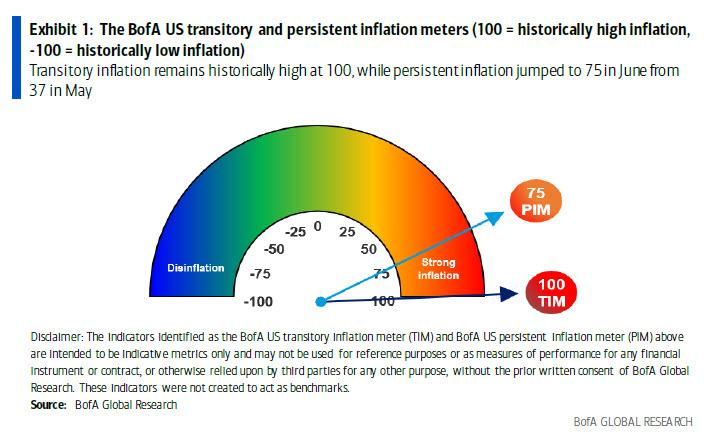 The tachometer is redlined for both measures, yet the Fed says it’s keeping the pedal to the metal. This should get interesting, especially when our driver candidly admits,

First of all, a lot of humility is appropriate here. We don’t know what the trend labor-force participation is…. Presumably, if there’s less labor supply and if there’s less participation structurally, then you would see that in the form of higher wages and higher inflation. We would be able to see that.

Well, Mr. Powell, we DO see that in the form of higher wages and higher inflation … all across the board. That burning oil is streaming out from the hood of our race car already. So, we’re there. But, hey, let’s run even hotter for even longer before we back off the gas!

Powell also noted at one point during the day that, in two weeks, the Fed will be meeting to talk about their path for reducing asset purchases (at 1:48:07), so maybe they are starting to feel the heat pouring off the engine and recognize they need to get to the conversation more quickly. We all recall that just two months ago Powell said he and his banking cohorts were not even thinking about starting to think about tapering stimulus. Inflation has already crowded them to where they have now scheduled a time to start thinking about it.

In the following interview by Bob Unger, one of the regular readers of my blog, I explain why the Fed is staying on this peculiar path of high money-fueling of the economy and extreme low interest lubrication, even as it says the economy is growing robustly and acknowledges that inflation is already far hotter than it anticipated: