Rampant Dollar Is About to Undo the Fed's Best Plans 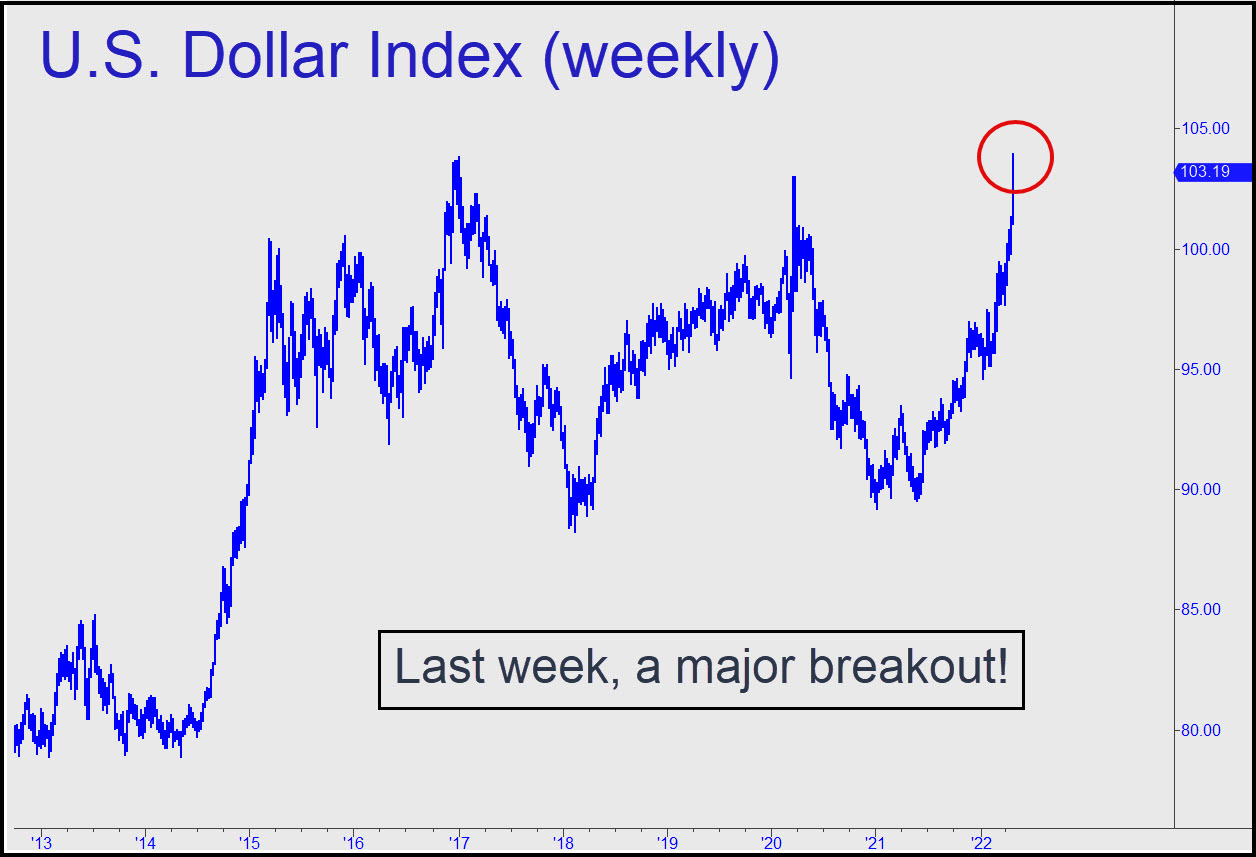 A lone deflationist on the lunatic fringe of economics 30 years ago, I wrote in Barron's and the San Francisco Sunday Examiner that an out-of-control dollar eventually would do us in. Specifically, I asserted that a short squeeze on dollars would send their value soaring, making it difficult or impossible for anyone who owed dollars to repay them. I'd already run this idea past a few Ivy finance professors, who all had the same reaction: "What have you been smoking??"  Not Professors Ivor Pearce and W.P. Hogan, however. It was their 1984 book, The Incredible Eurodollar, that had awakened me to the potential disaster brewing in a dollar market vastly larger than all of the others put together, including stocks and Treasury paper. Could a tradeable asset available in theoretically unlimited quantities from the central bank ever be in dangerously short supply? "An interesting question," Prof. Pearce allowed in a phone conversation we had at that time.

The possibility had fascinated me since my days as a floor trader on the Pacific Stock Exchange. It was not uncommon to see a stock soar simply because too many traders had bet against it. These panic-driven melt-ups blithely ignored poor 'fundamentals' to generate rallies that tended to enrich the reckless and stupid at the expense of the well-informed. The latter invariably suffered pain an even financial ruin, although many of them were very smart guys who could do the math. In one particularly memorable instance, they calculated that a certain airline stock trading for around $80 was not worth half that. After the stock ultimately climbed above $200, standing quants on their heads and wrecking some financially promising young lives, the quaintly stupid notion of 'valuations' would never be the same for them. Or for me.

Short Up the Old Wazoo

This is precisely where the biggest players in the global financial system are now: short dollars up the wazoo and confident that the math is on their side. That's because it has been so easy for them to make absurd sums of money by lending dollars promiscuously against any kind of debt instrument a team of MBAs could dream up. This explains why the primary venue for leveraging dollars, a virtual pleasure dome of finance loosely known as the derivatives market, has grown to more than $2 quadrillion in size. Every penny of it represents offsetting bets for and against the dollar, with borrowers effectively on the short side. Even the little guy has gotten in on the action, borrowing dollars to buy homes and cars whether affordable or not. A dollar cheapened by inflation will make it easier for them to repay what they owe. In practice, however, and unfortunately for the over-housed and over-vehicled, the dollar's value has been soaring lately relative to all other currencies and even gold. As a result, the dawning recognition of the economic harm this is certain to cause is starting to make investors nervous.

With stocks falling hard last week, the Dollar Index broke out to a 103.93 high that exceeded no fewer than three prior peaks created since early 2017.  It took enormous buying power to get past these impediments, implying that short-squeeze nitromethane is now fueling the dollar's rise.  The trend looks all but certain to continue, and we can therefore use the small but technically important peak shown in the chart at 109.24 as a minimum upside target for now. No one in officialdom knows about 109.24, but its decisive breach would put the Fed's ostentatious 'tightening' regimen in mortal jeopardy. Powell & Co. are supposed to be managing our inflation expectations, but as the dollar continues to rise, it will become increasingly clear that  the charlatans who run the central bank are out of cheap tricks to fool us into thinking they know what they are doing.


Are You on This List?
Look for a further squeeze on the dollar to push the price of oil beyond the reach of consumers outside of the U.S. It will also weigh increasingly on mortgage borrowers, popping the housing bubble and reversing the near-vertical run-up in car prices. It will price U.S. multinationals' products and services beyond the reach of global customers, eventually crushing corporate earnings. It will also put the yen, pound and euro under enormous pressure. Putin pegged Russia's currency to gold to prevent it from sinking toward worthlessness. This is a stop-gap measure at best, since it relies on robust sales of natural gas to keep the Russian economy from flatlining.  But it is no solution for most other countries, since they lack sufficient gold inventories to make a peg to bullion work.

While investors may not understand the implications of a short-squeeze on the dollar, the stock market has reacted intuitively with disturbing signs that a bear market has begun. But the 10% decline in shares so far is not even a warm-up for what's coming. Wait till the financial whales realize that their all-in bet on inflation is dead wrong.  It could take them a while, so there is still time for wary investors to batten the hatches. If you  Google 'dollar short squeeze', you'll find that virtually all commentary on the subject pertains to a squeeze driven mainly by professional traders. This is a far cry from the short squeeze I've been writing about all these years. That squeeze -- the one that is actually coming --  will be global and affect everyone, not just the trading desks of big banks. Inflation fears are about to slam into the far bigger, deflationary  reality of a strengthening dollar. The benighted hacks who invent the news ought to ask their supposed experts how much more inflation the U.S. is likely to have with the dollar rising sharply.  Prefer straight talk to boring mainstream blather? Click here for my recent interview with Howe Street's Jim Goddard.