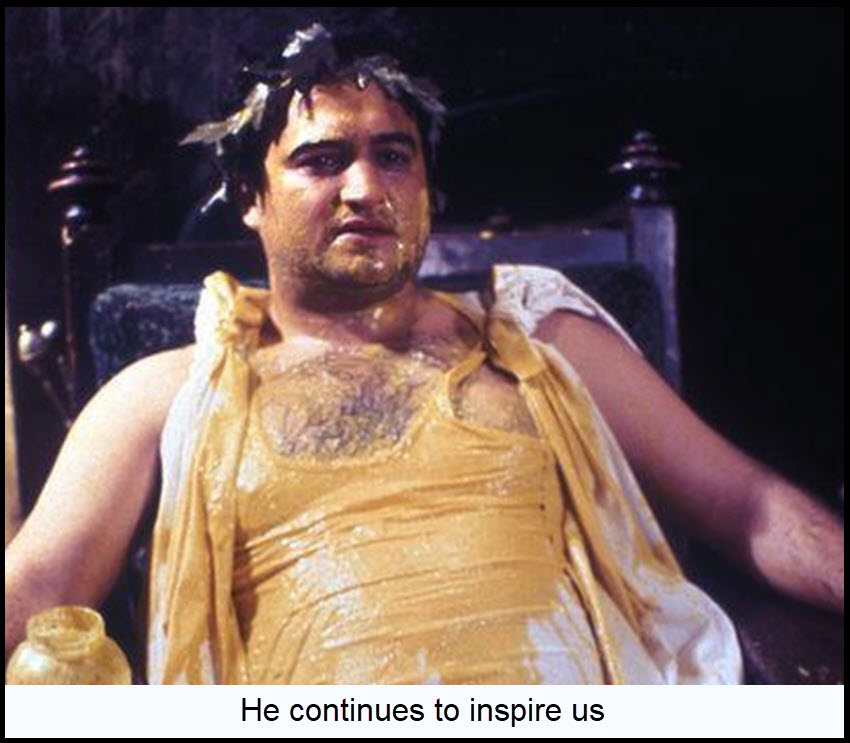 Flush with stimulus, the states are in a spending mood that can be summed up in a single word:  TOGA!!!!!  Take Oklahoma. Their latest budget reflects an annual increase of nearly 18%, according to report from the Associated Press. It includes bigger earmarks for education, corporate and personal tax cuts, credits for school choice and even for film producers.  In Florida, the article notes, outlays will rise by about 11%, to a record $101.5 billion.  The extra spending will provide "bonuses for teachers, police and firefighters, and new construction projects at schools and colleges."  Believing they have money to spare, Florida lawmakers also have expanded sales tax breaks for school and hurricane supplies and created a tax-free week for purchasers of museum and concert tickets and recreational gear for camping, fishing and surfing.  In New York, a $212 billion budget is nearly 10% higher than last year's, most of it coming from Federal relief. The Cuomo government is planning to boost aid to schools by $1.4 billion, and spend another $1.3 billion to overhaul Penn Station, among other projects.

What Could Possibly Go Wrong?

Federal aid amounts to fully 15% of what the states took in during fiscal year 2019, according to Moody's. Since they have until 2024 to spend the most recently disbursed Covid money, some states are waiting until later in the year to budget their windfalls.

No question, increased spending by the states will have a bullish impact on the U.S. economy for at least the next 2-3 years. Even so, some are wondering what will happen when the money runs out. "I’m afraid that we are spending money and making commitments that we will not be able to sustain once that one-time federal money goes away," said Sen. Bob Rankin, a Republican who sits on Colorado's joint budget committee. Perhaps Rankin shouldn't worry so much, since there is no law that says the federal money must "go away".  This seems particularly true now, since the idea of free lunch is more popular than ever, gaining political support because it seems to be working so well. As how could it not? Besides financing a blowout in state spending, freshly printed money from Uncle Sam has caused stocks and residential real estate to skyrocket, consumer spending to overwhelm lockdown strictures, and the economy to recover as though a world war just ended.  So what if grocery prices have shot up and no one wants to work!  Such niggling concerns are a small price to pay for stimulus that has made the middle class wealthier than ever, at least on paper.  And never mind that if every dime of stimulus were banked against the states' unfunded pension liabilities, the liabilities would swallow the entire sum without leaving an economic trace.

In truth, the biggest threat we face is that the short-lived, seeming successes of stimulus will make everyone a believer in Keynesian quackery. The British economist John Maynard Keynes hoodwinked many politicians and colleagues into believing the economy would benefit if the federal government paid workers merely to dig holes and refill them. This absurdity, never out of fashion on the left, ignores the common-sense fact that capital would take the hit and that its egregious misallocation would make us all poorer in the long run, not richer. Multiply the hole-digging brigades ten-thousandfold and you arrive at our current spending spree, a Covid-palooza of misallocation.  And who will pay for it all?  Although the question has surfaced in recent debates on Capitol Hill, that doesn't mean anyone takes it seriously enough to confront the answer. But make no mistake, the money-from-trees that has encouraged huge new outlays by the states is just borrowing in disguise, and that means it will have to be repaid.  However, since the sums involved have grown far too large to repay via higher taxes, there are just two alternatives: 1) hyperinflation, which would screw lenders and reward borrowers while destroying all institutional conduits of borrowing and credit for at least a generation; or 2) deflation, which would leave the financial system intact while visiting pain on borrowers more or less in proportion to what they owe. There are no other possible outcomes, even if politicians continue to pretend that trillions of free lunches can be served up indefinitely without burdening anyone but "the rich".