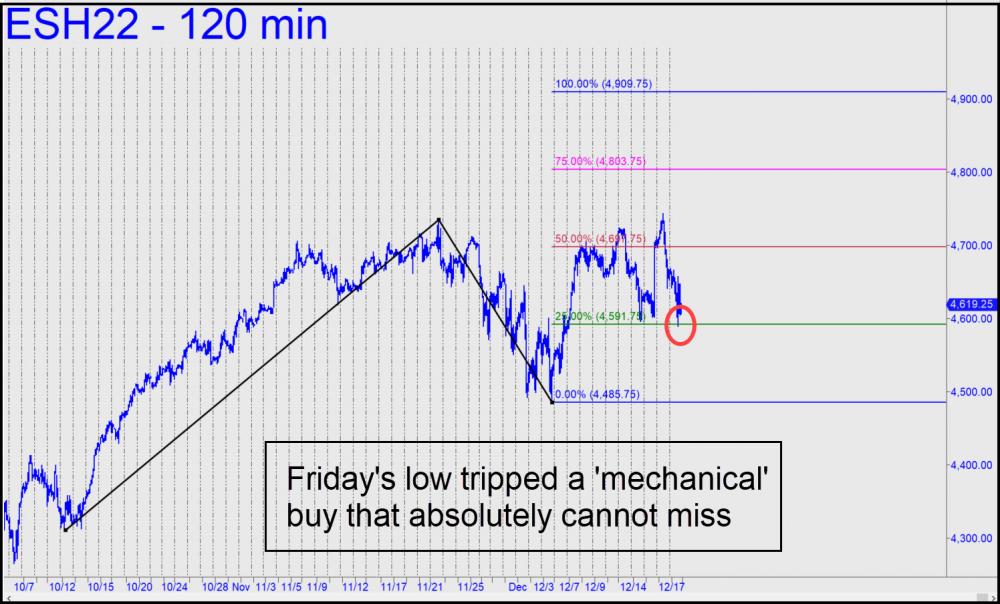 The bull market's agitated death dance continued last week, challenging bulls and bears alike to sell the dips for a rare change. The E-Mini S&Ps seemed to promise the perfect opportunity for this as the week shuddered to a close. On Thursday the futures trapped bulls with a short-squeeze spike overnight on the usual zero volume. They plummeted for two straight days thereafter, seemingly unable to arouse enough fear or anxiety to trigger short-covering. A rally attempt mid-day Friday sputtered out quickly, leaving the March contract near the intraday low at the bell. Such weakness ahead of the weekend should have seemed enticing to anyone wanting to bet the 'Don't Pass' line. Actually, this should hold true on any Friday, since there's absolutely no chance there will be news over a weekend that could be construed as remotely bullish, other than by the blithely ignorant talking heads who appear regularly on Bloomberg and CNBC.

The pace of Powell's tapeworm seems to be Wall Street's biggest concern, but fund managers should be more worried about why nearly every competent chartist in the business has been saying the bull market is over or very nearly so. They are all going to be right, and that's why the market has been jerking their chain with a series of head fakes and swoons stretching back to early November.

Much as I'd like to join my colleagues in proclaiming the bull market deader than Kelso's nuts, the charts suggest it has at least one more spurt left. The technical reason for this is that Friday's close near the green line tripped a textbook 'mechanical' buy, according to the rules of my Hidden Pivot System.  We might therefore expect a rally to p=4697.75 at least, but possibly to as high as D=4909.75.  This puts the S&Ps somewhat out of joint with a forecast made here earlier. We were equally focused on AAPL, and noted that both vehicles needed to rally exactly 4.5% to achieve major targets.  AAPL's hard fall last week left it 10% shy of its target, however, decoupling it from my 'twin peaks' scenario. I'll bet on the  E-MIni S&Ps for now anyway, even if AAPL is left groping for a foothold while the futures rally.  This would be congruent with the oh-so-clever, constant rotation of OPM to hoist a market that has grown too big and heavy to continue faking its way higher. We'll keep a close eye on the E-mini's progress toward 4697.75 in any case, since a decisive reversal from somewhere shy of it could spell trouble.