October 13, 2021 Robinhood Markets: Robbing From Retail And Giving To Citadel
October 07, 2021 Gold And Silver Are Set To Take Off – The Mining Stocks Are Highly Undervalued
October 01, 2021 Will Price Inflation Prick The Stock Bubble?
September 29, 2021 In The Golden Age Of Fraud – The Biggest Is The Fed
September 14, 2021 With Inflation Raging, Why Is Gold Not Moving Higher?

A Taper Is Likely Off The Table – Gold, Silver and Mining Stocks Are Ready To Rumble 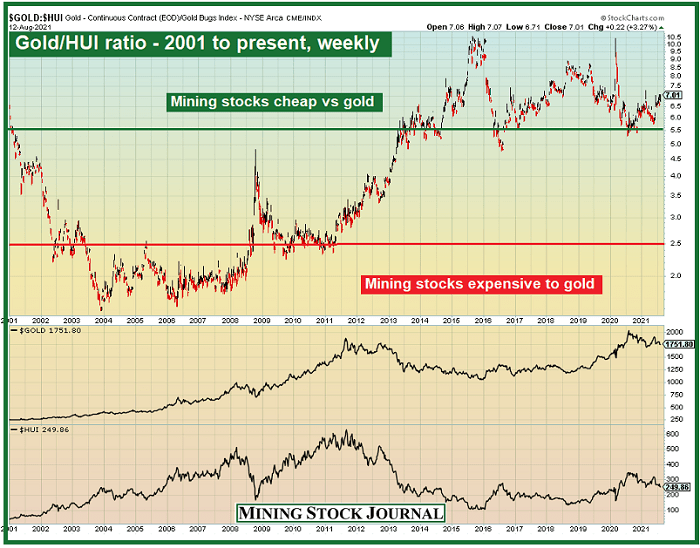 The chart above shows the gold/HUI ratio going back to 2001. I would have used GDX but I wanted to take the graph back to beginning of the precious metals bull market and GDX didn’t start trading until May 2006. It’s not perfect, but in general when the ratio is below the horizontal red line, mining stocks are expensive relative to gold – note the big selloff in the HUI (bottom panel) in early 2009 – and the miners underperform gold. When the ratio is above the green line, gold is expensive relative to the miners and the miners will at some point outperform gold. The chart tells me that mining stocks are cheap right now.

This chart shows the XAU/SPX ratio going back to 1973: 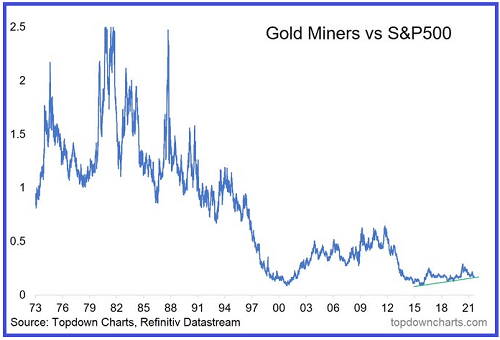 It shows the degree to which the mining stocks are undervalued relative to the general stock market. The mining stocks are almost as cheap as they were in 2001 (when I started the HUI was trading at 45). This doesn’t mean that they can’t get even cheaper – something that could happen if/when a stock market “accident” hits. This is why I have been trying to emphasize the importance of keeping a lot of cash on hand in case that “accident” happens. There’s no need to try timing a bottom. If we can capture the middle 60-70% of the next move higher, we’ll make multiples of what we have invested now in mining stocks.

Another indicator that the precious metals sector may be starting to form a bottom is the Commitment of Traders report (as of August 10th, published August 13th):

The graphic above is from the August 13th COT report which shows Comex trader categories for paper silver through August 10th. Both commercial segments (producer/hedger and banks) have been reducing their net short position in silver futures. At the end of January this year the net short position for the swap dealers was 21k contracts. At the same time, the hedge funds (managed money) segment has started to reduce its net long position aggressively and pile into the short side.  The most recent COT report from last Friday showed the banks (swap dealers) were net short less than 400 contracts. Based on the change in the open interest in silver contracts (published daily) I would not be surprised to the see banks net long silver – in fact, I expect it. I also expect to see that the hedge funds have further reduced its net long position.

Historically when this pattern has occurred, the precious metals market has bottomed and began a move higher within a couple of months. The next COT report comes out tomorrow (Friday, August 20th). Based on the changes in the daily open interest reports since August 10th, I would not be surprised if the banks are net long silver contracts. The last time I can recall that this happened was in the fall of 2015. The precious metals sector bottomed from the 4 1/2-year bear cycle at the end of 2015.  I’m not saying it’s definitive that the pattern will repeat. But I believe, in conjunction with other indicators, that there’s a decent probability the precious metals sector could begin move higher this fall, absent a stock market accident.

Ultimately, I think the precious metals sector is setting up for an eventual big reversal. It may have started today now that the employment report has confirmed my view that the economy is rapidly slowing down, which will take discussions of a Fed taper off the table (not that believed the Fed was going to taper anyway).  The mining stocks have been ruthlessly sold off over the last four months. However, since the sector decline began in August 2020, GDX managed to hold a double-bottom just above the first bottom it hit in March, which it traded down to its lowest level since June 2020. This has not been noticed by mining stock analysts but technically it is important.

The commentary above is from the August 19th Mining Stock Journal. Some smaller cap/mid-cap producing mining stocks have been sold down levels from which I believe they will double or triple (or more) in the next bull move in the sector. One of the companies I cover and recommend in my Mining Stock Journal is throwing of close to 9% free cash flow yield. That is the definition of value stock.  Many of the junior exploration/development companies I cover, recommend and invest in have the potential to 5-10 baggers from their current down-trodden level. You can learn more about my newsletter here:  Mining Stock Journal information.  I do not take compensation of any type from mining companies and I have been doing my own research in the sector for over 20 years.