Throughout the Tesla’s history, Elon Musk has done an incredible job of deflecting the market’s attention away from the Company’s decaying operations. Recently, as Tesla’s global EV market share is rapidly shrinking from a tsunami of higher quality, better produced EVs from long-standing global OEMs, Musk has become quite sloppy with his effort at putting lipstick on his diseased pig.

In an attempt to arrest the sell-off in TSLA since its post-SPX inclusion all-time high of $833 on January 26th, Musk released the 2020 20-K early on Monday, February 8th, in which it was announced that TSLA had bought $1.5 billion worth Bitcoin with shareholder money. The move by Musk was designed to deflect attention away from his unwillingness to “hard code” sales guidance for 2021 – something for which historically he always issued bold, specific numbers. He was hoping to offset the stock’s price decline after the earnings release on January 27th and wanted to get the Roman Candle stock price launch experienced by Microstrategy when its CEO announced a plan to load up on Bitcoin.

The move by Musk failed, badly – instead the stock sold off as much as 34% from February 8th’s closing price. It’s currently down 22.7% from Feb 8th despite Bitcoin recently hitting an all-time high:

Based on the share price behavior since the earnings release and the Bitcoin announcement, it’s fair to say that a wider market audience is starting to acknowledge Musk’s chicanery.

But it gets better. On March 12th, Tesla filed an 8-K with the SEC announcing that “Jerome Guillen, President, Automotive, of Tesla, Inc. transitioned to the role of President, Tesla Heavy Trucking.”  The news was “effective” as of March 11th but Tesla did not issue a formal press release and the 8-K has not been posted on Tesla’s website (click to enlarge): 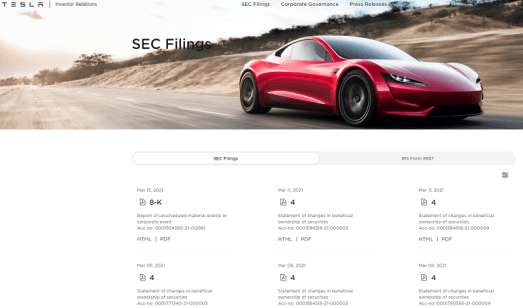 Thus, it was quite curious to me that on Monday, March 15th, that Tesla did post an 8-K on its website announcing that, “Effective as of March 15, 2021, the titles of Elon Musk and Zach Kirkhorn have changed to Technoking of Tesla and Master of Coin, respectively.”  This move by Musk, or rather pathetic display of “Theatre of the Absurd,” also was accompanied 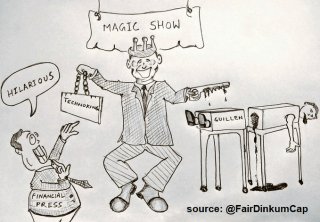 by a formal press release, first issued through traditional Tesla propaganda outlets like Teslarati, Electrek and CNBC followed by a release through Dow Jones. Shortly after that, the news of Guillen’s “transition” from overseeing Tesla’s entire automotive operations to being pigeon-holed in the fairytale “Heavy Trucking” division was leaked through Teslarati and Electrek. (source of cartoon: @FairDinkumCap – click to enlarge)

This 8-K/news release maneuvering is clearly a dismal attempt to deflect the market’s attention away from the big demotion of Guillen, who was once labeled “Tesla’s automotive production genius.”  Guillen goes from Automotive El Hefe to, as my colleague @Motorhead describes it, “out to the wilderness…the Semi is a fake project.”  He adds that “this is a huge red flag.”   A view on this matter that I second.

Ironically, the SEC Form-4 filings that were posted on Telsa’s website, on the same day the Guillen 8-K should have been posted, show that Guillen sold a considerable amount of Tesla shares. Not the type of behavior the market would expect from an insider who was put in a charge of a “significant” development project.  Guillen clearly expressed his opinion of the job transition by dumping a lot of shares.

It’s not worth commenting on the new titles of “Technoking” and “Master of Coin” for the CEO and CFO.  The ridiculousness of it is palpable, childish at best.  Perhaps “Master of Con” would be more appropriate for both the CEO and CFO. The bottom line is that Tesla’s dominance of the EV market is – as predicted – rapidly deteriorating from an onslaught of superior quality and competitively priced EVs from a growing cadre of legacy OEMs.   As Sanford Bernstein Research published last week:

“Early all-electric products from mainstream manufacturers were underwhelming, but that is now being rectified through a product onslaught across every market segment.”

Tesla is already feeling the deleterious effects from competition in the EU and the U.S. (Ford Mach-E).  And by the end of 1H 2021, it will have lost a considerable amount of market share in China.