2 days 1 hour ago
GoldSeek Radio Nugget -- Patrick Yip: "OneGold, the Robinhood for PMs"
2 days 3 hours ago
Was That a False Breakdown in Silver?
3 days 4 hours ago
Silver Update Video: Bullish news for Silver this week as China..
3 days 9 hours ago
The Silver Chart THEY Don’t Want You to See!
5 days 18 hours ago
COT Silver Report - May 13, 2021

Since I’ve spent a fair amount of time on the US stock market of late, I won’t say much. Just taking a moment to note September just finished its fourth consecutive week down (final full week), maintaining a downtrend that began as we rolled over from August into September, setting up an October surprise.

Here you can see the weeks in blue and the overall downtrend of lower closing highs in red: 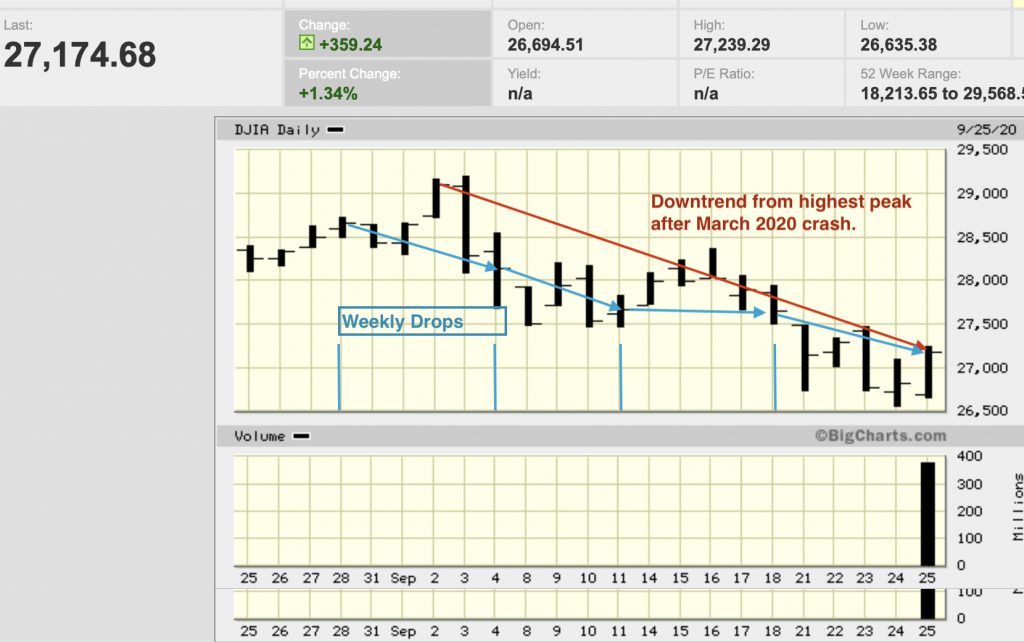 Toward the end of next week, we’ll step into October for a likely October surprise sometime in the month. September’s downturn was, just as anticipated, more bouncy with daily ups and downs than March’s plunge as the battle between the bulls and the bears plays out on a more protracted scale this time.

You can feel the breath of the bear

The overall market has already crashed into a bear market with the median stock price now back down more than 20%: 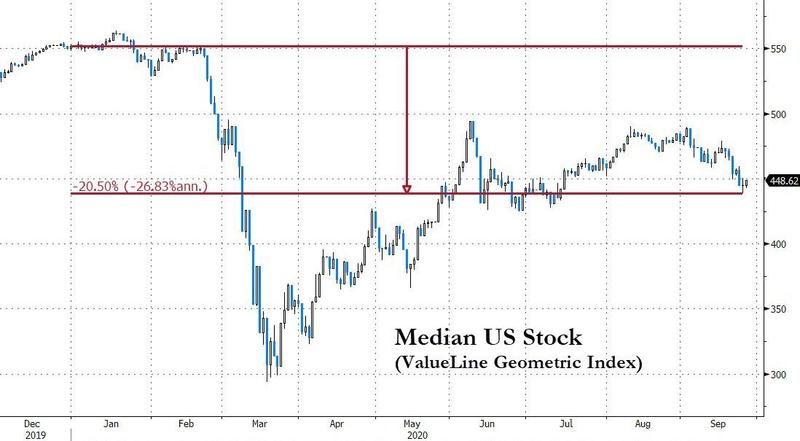 Bear markets are not technically determined, of course by how far the market’s median price has dropped but by the drop in the total value of major indices. Looking at the market based on drop in median price, however, cuts out the nonsense at the extremes to see how corporate stocks are really doing.

For an array of pictures showing how broader markets and indices are doing, I’m going to let others (one of whom is usually bullish) point out how the market is breaking down in the manner I indicated it would. I recommend this article on Seeking Alpha: “Danger: Bears Are All Around.” The thrust is that many smaller indices and measures already show bear markets. Another set of market internals, showing serious market deterioration, can be found here: “Market Internals Point Towards Further Selling.”

It’s interesting to note, too, how extreme net fund flows in and out of US stocks have swung from the August melt-up to September’s downfall: 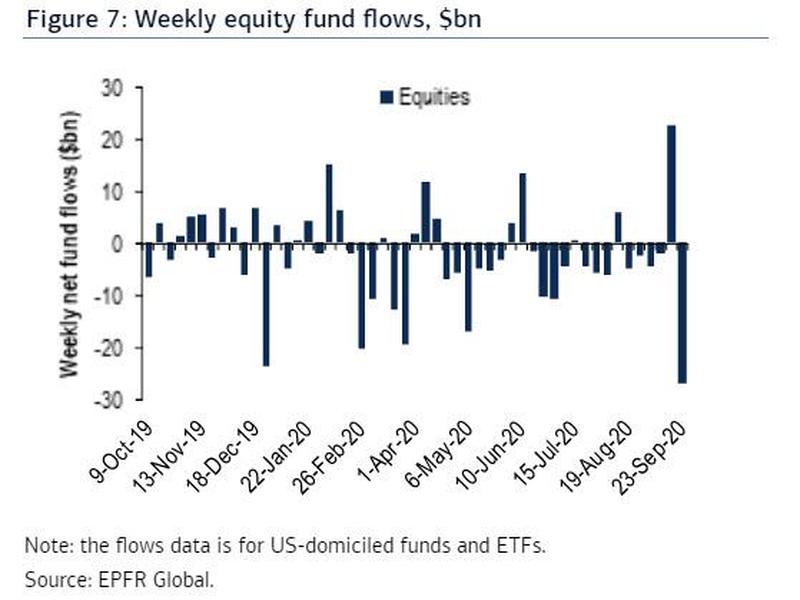 The risk-off sentiment on Wall Street fueled the third-worst weekly outflow on record from U.S. equities, with technology shares falling out of favor … in a reversal from the previous week’s biggest inflow in more than two years. Investors exited the hottest sector of the rebound, pulling the most money out of tech funds since June 2019.

This record sentiment reversal was driven by despair-driven capitulation outflows … as tech-focused ETFs suffered $1.23 billion worth of outflows, the largest since December 2018, when global stock markets tanked. September was also the first month of outflows for the tech sector since the March crash.

In a massive reversal, tech-focused ETFs led the plunge in fund outflows after trekking upward for months during the Coronacrisis melt-up when techs were the market rally leaders: 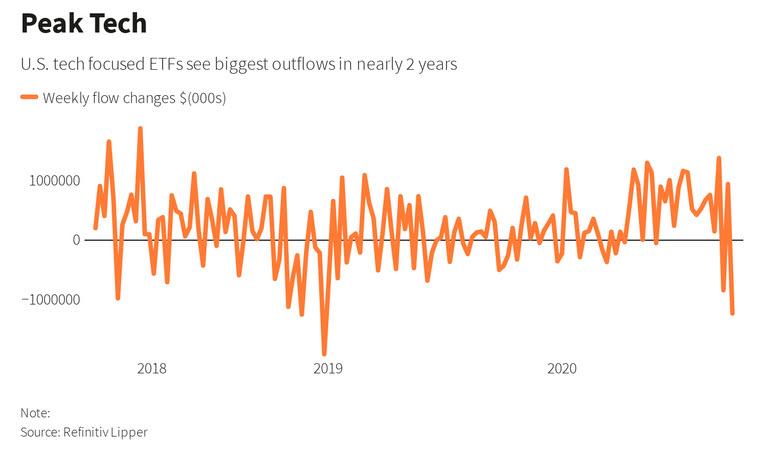 In a flight to haven assets, investors are pulling out of equities as well as cash to put their money into debt and gold.

But nowhere has the sentiment shift been as clear as in Nasdaq 100 Mini futures, where after more than a year of bullish sentiment … speculators finally puked, sending the net non-commercial [futures] to -134,311 contracts, surpassing the peak bearish sentiment during and after the financial crisis and in fact the second highest on record … 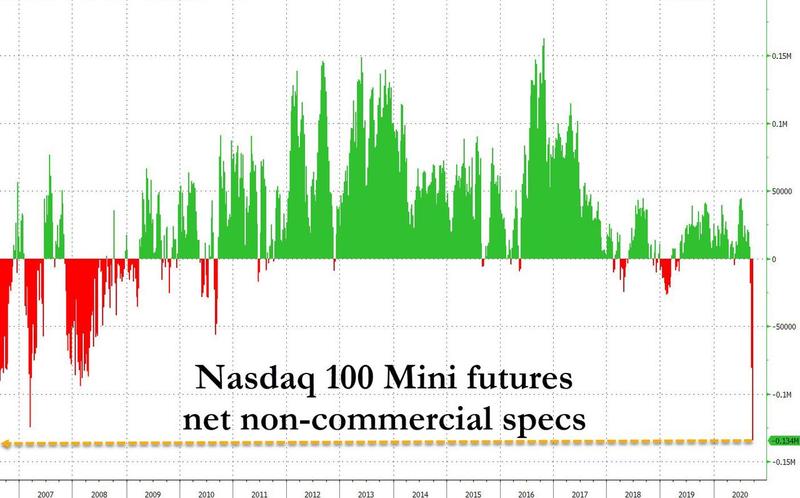 … the highest coming just before the start of the Great Recession.

What is curious is that it took only a modest Nasdaq correction over the past month to send sentiment to the second most bearish on record. And unlike 2006, this time the Fed can’t cut rates any lower to reverse sentiment.

If stock prices reverse their new trend and rise because of some good news, as we saw a glimmer of on Friday, this high short position will create a short squeeze and will rocket the market back upward. That’s because the extreme bets toward a market crash will have to “cover their shorts” by buying a lot of stocks if the September downtrend reverts to rising again.

However, if prices continue to fall in their new downward trend, as the many suddenly shorting the market show they believe will happen, the bearish shorts will simply make a lot of money off of the longs in the market’s crash.

A short squeeze can occur when a company that has a high proportion of short interest compared to overall float sees a bump in share price. In essence, short interest refers to the ratio of available shares that are being shorted in the marketplace. Keep in mind however, having a high short interest should serve as a signal that something may be fundamentally wrong with the underlying business.

The same is true for an overall market, a bump to the positive can send the shorts scrambling for cover. On the other hand, it is signal that a whole lot of investors see something fundamentally wrong with the underlying market, and they may be dead right.

Sentiment has clearly shifted bearish. so a large number of bets have suddenly been placed that say the market will fall hard. Those shorting the market are counting on shaking out the weak retail-investor hands. They could well be right.

That means the troops have assembled for battle. If the assembled bears are right, the bulls are already in a dying market, and bears will make good money in short time. However, Friday’s abrupt rise in the market right at the end of the week, gave the bulls a final breath of hope because it could force a short squeeze that rounds the bears up for a fierce slaughter IF they are not strong players or are wrong in betting September has set the market’s new trend.

Still, Friday’s rise was not enough to break the new trend line down for the market’s top closing points. (Refer back to top graph.) So, it is indecisive, while a near-record amount of bets are from players who have put serious money at risk to say they believe September has set in a new trend that will hold.

October’s going to have a big surprise for someone!

Millennial, bad-mouth, big-boy, blathering day-trader Davie Portnoy had another stock meltdown this week. You may remember how he carried on about how he could trust Tesla and Smith & Wesson to save him two weeks ago. Sounds like his demigods let him down this week, just as they did then, but he clearly has learned nothing from it: (Skip to the 3:00 mark if you can stand his seething-hot language because Davie is scorched now that stocks do not “always go up” for him.)

Poor millennial melt-down Dave. Down around another quarter-million it sounded like … just on this bad week’s worst day. Good thing Friday cut him a little slack, or he would have died of a stroke over the coming weekend. Down, Down, Davie.

The market is still trending relentlessly down four weeks and running. Unless there is any extra-big news on stocks next week, I’m going to move back to focusing on the economy in general as stock action is likely to play out with ups and downs for a long time on this new downslope that slowly knocks the bulls senseless. No sense doing a play-by-play every week.

The market’s downfall has, however, been the truly big news for this month in terms of how I’ve anticipated this economic collapse will play out. It was one of the signs to watch for to see if the economic trends are holding as forecasted for the Epocalypse.