Top Looks Near for Two Biggies 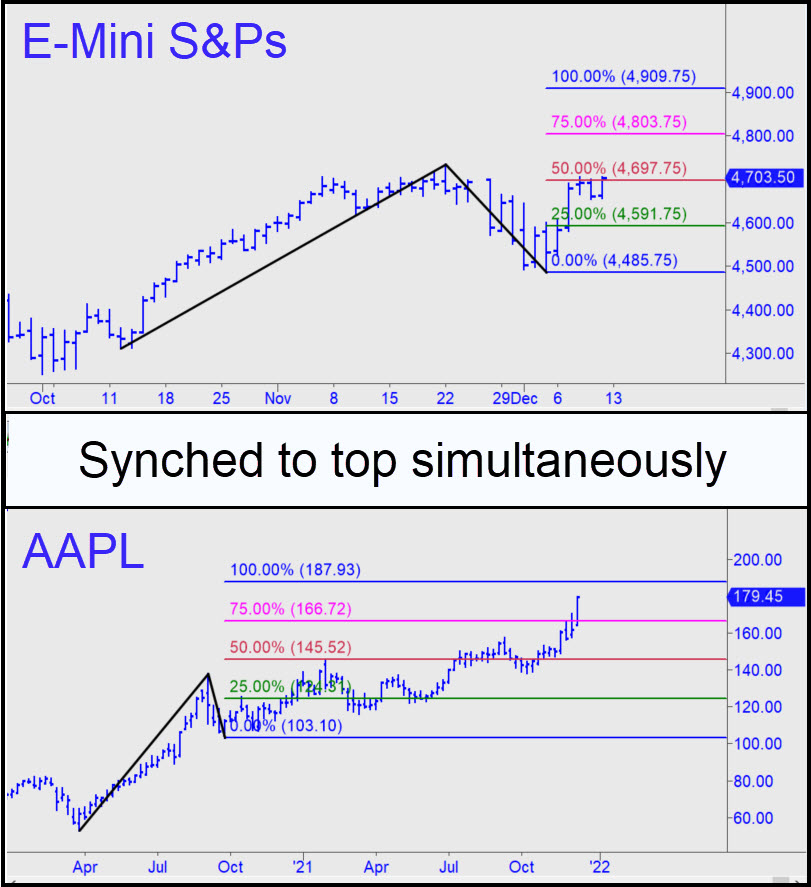 The charts of AAPL and the S&P 500 are synced to imply that a potential bull market top lies just above.  Both would require a rally of 4.5% from current prices to achieve 'Hidden Pivot' rally targets of major degree,  This means there's a good chance the respective tops would be important ones and presumably shortable. Given the clarity of the patterns used to calculate the targets, it seems extremely unlikely that either of the two world-beaters will exceed the targets by much if at all.

Apple's chart is the more telling, since the stock last week broke free of the gravitational pull of a key resistance at 166.72, ending the week fully $13 above it.  For its part, the March E-Mini S&P contract closed just a hair above a comparable resistance. The 0.1% overshoot would not be sufficient by itself for us to infer that the futures are about to soar into blue sky. However, in the context of AAPL's overwhelming uptrend, it can be confidently inferred that the E-Minis' stall will be resolved to the upside.

Apple is not merely an institutional favorite, it is crucially important to the the grand illusion that a global financial system headed inexorably toward collapse will continue to muddle along. The Players will do anything to sustain this illusion, but it takes a lot of money to heft a stock approaching a $3 trillion valuation.  Trickery has helped and is becoming increasingly evident.  For one, Apple's biggest rallies in recent months have occurred in the dead of night, on thin volume and very thin supply. For two, morning openings have been similarly manipulated with short-squeeze leaps that dare sellers to get in the way. Taken together, these tactics and a couple of others sleights have kept AAPL in a relentless waft since April. If you have trouble imagining what could end this clever game, see last week's commentary, 'Concerning That Hoard of Cash on the Sidelines'. To summarize: The hoard is entirely a creature of money velocity, and it will cease to exist as soon as serious downturn in stocks spooks investors.  Start preparing for this by jotting down the two targets shown in the charts:  187.93 for AAPL and 4909.75 for the March E-Mini S&Ps.  When the respective vehicles get there, it may be more difficult to find a bomb shelter with an open hatch.