January 20, 2022 Stocks and Awe: The Federal Reserve Regime Change is Here!
January 13, 2022 Food Shortages Punching the Populace in the Gut; No Bubble Here, Folks!
January 10, 2022 How Bad Is the Stock Market Route Now, and How Bad Will its Collapse Get?
January 06, 2022 Media Slavishly Praise Strong Jobs Market as Being Saved by Vaccines
January 05, 2022 Bonds Buckle, Top Stocks Stink

Warning Signs of Recession in GDP and Especially its Components

A little virus and a big set of misguided responses to it are sinking the unsinkable world.

While third-quarter GDP growth came in a little higher than the Atlanta Fed was predicting, it still came in below the consensus of economists, which averaged at 2.6%. The Bureau of Economic Analysis came out with 2.0%:

That is the lowest since the Covidcrash. Prior to the Great Recession, any reading of 2% or less was regarded by most economists as prerecessionary. It’s a plunge from the previous quarter’s final number, which was 6.7%.

The main cause of the drop was what might be considered the most recessionary sign of all in a consumer economy: consumer spending plunged from 12.0% growth in the second quarter to 1.5%.

The main causes of the big drop align squarely with the causes I’ve been laying out for economic decline all year:

Shortages, transportation bottlenecks, rising prices and the delta variant of the coronavirus weighed on both goods and services spending.

The delta variant contributed by bringing back more business closures and state-determined vaccine restrictions on who can go into certain businesses. International trade was also a negatively contributing factor, but it has been negative since the Trump Trade Wars, though obviously Covid made the problem significantly worse.

Inventory investment was a big boost, without which GDP would have been lower still; but that is a possible negative for the future. Many businesses have overpurchased inventory in compensating for inventory they bought that did not arriving from ports to shelves. Businesses have tried alternate supply lines. Once all supply lines open up, the flow through of the huge backlog of purchases already made could cause future orders to slow down as we go from drought to a flood of items already ordered; but that is likely awhile off.

Still, don’t expect a lot of inventory buying in the final quarter to continue to help GDP growth when nothing is moving and businesses have already explored alternate sources and, especially now that growth in consumer purchases has slowed to almost null.

In fact, consumer spending on goods declined this quarter. It was only consumer spending on services that kept the category slightly positive, albeit far lower than it had been. The services people spent money on were international travel (making up for lost opportunity), transportation (probably reflecting a poor factoring out by the BEA of the inordinately high inflation in shipping costs) and healthcare. The roll-back of various emergency government stimulus programs over the past quarter likely weighed heavily on both businesses and individuals.

With enhanced unemployment benefits being withdrawn through the quarter, real personal disposable income contracted by 5.6% annualized, with the saving rate dropping to 8.9%, from 10.5%. That means the saving rate has now returned to its pre-pandemic level, leaving a lot less scope for households to boost their spending, although the current rate doesn’t allow for any savings accumulated during lockdowns. 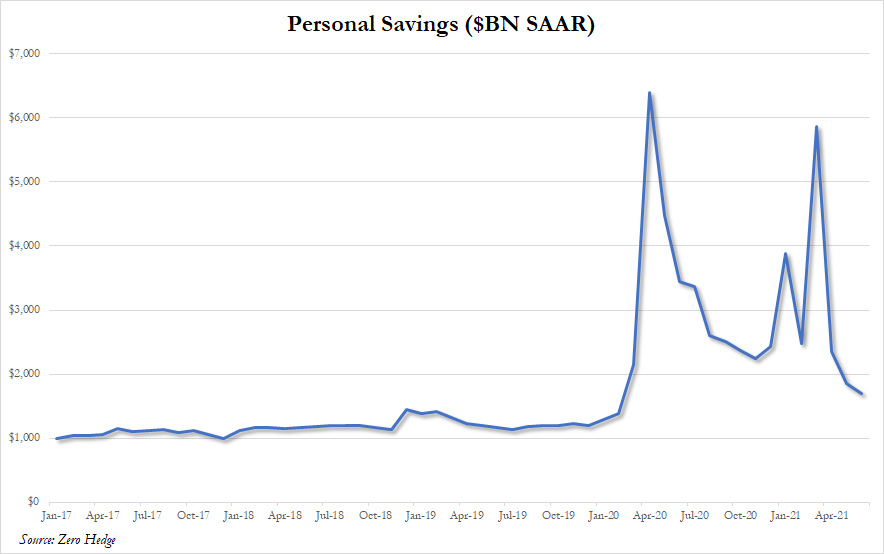 The inflation figures in the report showed inflation at 5.7%.

One of the few economic predictions, if not only, I made outside of my Patron Posts in the latter half of this year was the following:

Prediction: What few of the gurus are telling you, which I will, is that we’ll be in a recession by sometime this winter.

“This is Stagflation, and Here is an Easy, Practical Idea to Prep for it“

To be declared to be in a recession, those who make the official declaration, generally expect to see two consecutive quarters of negative GDP growth. Then the recession is declared retroactively to have started with the first negative quarter. So, if the economy keeps declining at the current rate, the present fourth quarter of 2021 will end with negative GDP growth. That quarter ends in winter. The first quarter of 2022 begins in winter, so we’ll be where I predicted either way if the economy even slides at half of last-quarter’s point drop in growth, and there are good reasons to think it will.

Biden’s big spending plans, if enacted, would be a countervailing force to the present downward momentum … at least short term. They would result in some spending boosts in the government category of GDP items and by business if there is a large infrastructure component in the final plan. It presently remains unclear if his plans will pass or how large they will be after running the gauntlet of senators and representatives they have to clear.

Other new factors, however, will add to the downward momentum. We know for certain Biden’s vaccine mandates will dampen the economy even more by knocking out millions of workers. That has a dual impact: it restricts the abilities of business from producing, transporting and retailing products or from providing services; and it diminishes the number of people with secure incomes, thus reducing consumer spending even more.

The Biden Mandates will especially impact healthcare services, which were as a major contributor to the small amount of GDP growth we had, and they will hit transportation extra hard because truckers are some of the least likely to comply with Biden’s forced approach, especially when those who transport in and out of ports already waste half their time sitting around waiting to be loaded or unloaded. The same can be said for many truckers at the warehouse end of shipping. Most don’t get paid if they are not logging miles. So, the mandates will exacerbate the main components in the supply-chain bottlenecks that are already damaging the economy.

Of course, we also have the possible of a fourth Covid wave. We’ve seen three relatively consistent occurrences of Covid waves, and the timing is about right for the next one, and a next one seems to building as Covid nows rises again conspicuously in highly vaccinated parts of Europe.

Without the Big Biden Plans, I have no doubt the vaccine mandates will carry us the rest of the way into recession sometime this coming winter. If the plans do pass, they could easily make my timing of the recession wrong; but they’ll likely drive inflation much harder and higher, ultimately still carrying us into a stagflation recession, depending on how all the new money the Fed will have to create is targeted. If money pours into the hands of businesses and/or consumers without resolving the supply-chain issues, it will greatly increase inflation without increasing the number of goods and services produced and sold. The Fed cannot create products. Right now, neither can businesses. So, the excess money goes to scrambling for the limited products and services that can be had.

Former Treasury Secretary Larry Summers on Thursday advised the Biden administration to take the threat of rising inflation more seriously…. “I think we do need to recognize, as people are starting to, that inflation is a serious problem…. if we can resolve the stimulus … debate quickly and pass legislation oriented to increasing supply that’s paid for in what it does — I think those are going to be the best ways forward. I think the Fed is still not fully recognizing the gravity of the situation…. [Treasury Secretary Janet Yellen] expresses confidence that inflation is decelerating and will be back to target levels by the end of next year…. I hope she is right but I think it’s much less than a 50/50 chance. I think it’s almost certain to last for another six to nine months, and it could well last longer.“

In other words, the Biden plans need to be pointed directly at resolving infrastructure problems that will rapidly improve shipping and help resolve the supply-chain problem, or they will create a lot more inflation. I don’t think an infrastructure solution is really possible. Most of the problems are not due to inadequate infrastructure but due to lack for laborers and coronavirus port closures and even businesses that closed for good with the first Covid shutdowns.

Gantry cranes are available, but they are not all being operated. Roads are available, but truckers are not. Ordering ports to run around the clock doesn’t help when they have no room to run because containers aren’t being trucked out of the port. Businesses that are missing one key part, don’t order more of other parts when the one part keeps them from producing. That, in turn, means things are not moving out of warehouses because one key part on the production end is stopping the need for moving all other parts through the supply line. Things are all choked up.

I’ve made it my primary thesis all year: the damages from the original Covid lockdowns all over the world are not going to be easily cleared. Things broke that did not restart! How we work and the demographics associated with it also shifted like plate tectonics. Infrastructure spending is not going to replace businesses that closed for good a year or more ago. It may ease trucking in minor ways, but it is not going to add new truckers, and companies that don’t have enough drivers are not going to buy more trucks or need better roads or larger port facilities. As I explained in my last article, Biden’s Tax & Vax plan will make that worse, especially the vax side.

A little virus and our magnified and misdirected responses to it are sinking the unsinkable economy because its construction was flawed by design in the first place.

My next Patron Post will be about how the Fed’s taper will hit the stock and bond markets right in their blind side with devastating consequences.