1 day 1 hour ago
Why Most Investors Will Miss Out on the Upside Silver Breakout... and Impulse Leg Moonshots: Part II
1 day 21 hours ago
Silver Fuels The BRICS Currency Rocket
2 days 3 hours ago
The Banks Are Manipulating Silver | Here Is How - Bix Weir
4 days 3 hours ago
Silver Under $20 | Here's What You Need to Know - David Morgan
5 days 17 hours ago
COT Silver Report - July 1, 2022

What Doc Copper Can Tell Us 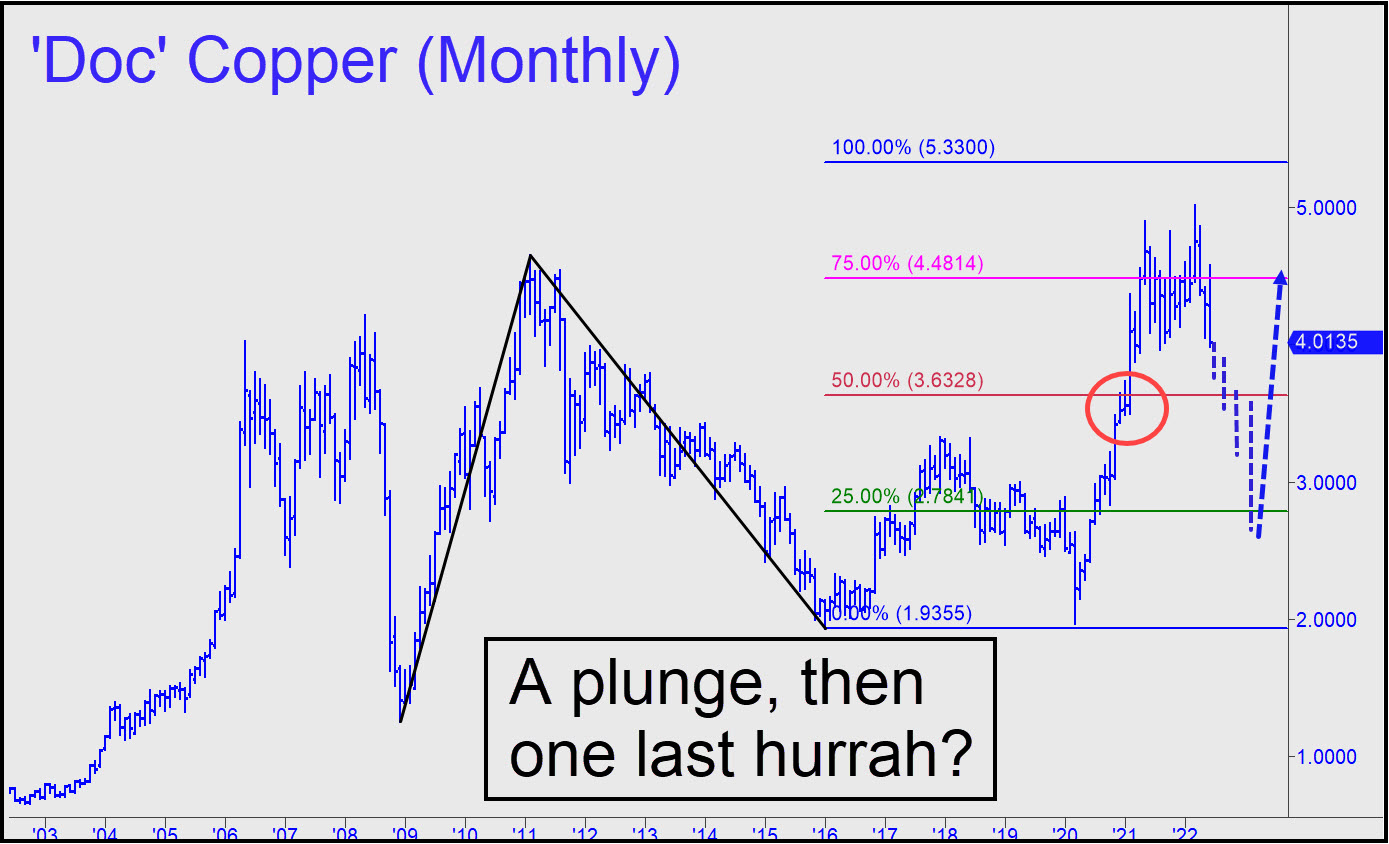 Copper's long-term chart suggests that the global economy could have one last hurrah once the bear market begun in January has run its course. Copper is reputed to have a PhD in economics because of its supposed ability to predict major turns accurately, In actuality, its track record is pretty impressive. The chart above shows its upturn in 2008 had a months-long head start on the bull market that followed the Great Financial Crash of 2007-08. Copper again proved prescient when the Covid selloff in the first quarter of 2020 turned into one of the steepest bull-market run-ups in history.

So what is it saying now?  There are a few things to notice in the chart. Most important is the ease with which buyers pushed past the 'midpoint Hidden Pivot' resistance at $3.63/pound (shown as a red line). A decisive move past this impediment is usually a reliable sign that the trend will reach the pattern's D target, in this case $5.33, It didn't, however, and that implies the sideways move that has occurred over the last 14 months is a bearish distribution, not a consolidation. To use a Groundhog Day analogy, we will likely face six more months of winter, give or take a couple of months, before the bear market and a still unacknowledged recession have run their course. The downwave could be steep and the recession brutal, since Doc Copper's expected dive looks all but certain to crush the red line. That makes a further fall to the green line likely. It would amount to a 40% correction from the $5 high and a 33% correction from the current $4.

At $2.78 (the green line), Comex Copper would become a screaming buy, technically speaking. That's because, under the simple rules of the Hidden Pivot System, the plunge will have created a textbook opportunity to get long 'mechanically'. The trade would be predicated on a bounce to as high as $5.33. My gut feeling is that the global economy is extremely unlikely to experience a resurgence powerful enough to push copper quotes to those heights. But a false spring seems entirely possible -- a monster rally in the context of a long-term bear market that eventually will see the Dow Industrials fall from a current 30,000 to below 10,000.