October 13, 2020 Why These Gold Standardites Are Wrong
August 19, 2020 Warren Buffett Shorts The Economy

What’s The Price of Gold? It Depends.

When someone asks what the price of gold is, the answer depends on which gold market he means.

In most cases, the different gold markets are close enough that the minor differences are insignificant. TV news anchors just want to know if the price is in a major trend, up or down (up). Old Uncle Ernie could be reminiscing about the bull market of the 1970s and comparing the price back then to the price today (spoiler: it’s higher today).

But if you’re studying gold, you may be curious about the differences between the three markets:

The prices in these markets are usually very close to one another, but they’re not the same.

If the prices in two different markets are normally very close, then there must be some force that ties them together. It does not happen by accident, and no one maintains it out of charity.

This distance, price A minus price B, is called the “spread.” The wider the spread, the more money that a trader can make, bringing the prices closer together again. This means he would prefer to wait for the spread to widen. However, he has competitors.

The same thing happens with these special traders in the gold markets, who are called “arbitragers.” They will keep narrowing the spread between spot and futures, until the profit on the trade shrinks to the point where one after the other of them cry uncle and stop going lower.

The key to arbitrage is that it must be possible to convert what one buys in one market into what one sells in another market.

For example, if you buy a 400-ounce gold bar in the London spot market, you could ship it to a refiner to be cast into four 100-ounce bars, which you could then ship to New York to sell. Or you could buy a COMEX future, take delivery of the 100-ounce bar, and send that to a refiner to mint into one-ounce bars to sell to a retailer. Gold is fungible, so these conversions are not only possible, but they are usually fairly inexpensive.

(Note: certain gold mutual funds do not allow conversion. For example, PHYS (traded on the NYSE) currently trades at a 1.4 percent discount to the value of the gold held in its trust. A spread this fat indicates that there is no way for arbitragers to buy shares, take out the gold, and sell it. At 1.4 percent, this would mean buying shares for, say, $1,972 and selling the gold stripped from those shares for $2,000. If this trade were possible, you can be sure someone would be doing it all day long [until the price of PHYS was much closer to the spot price].)

The price of a futures contract could be driven up significantly. Suppose Federal Reserve Chairman Jay Powell goes on TV to say that he plans to print trillions of dollars in a deliberate attempt to cause inflation. This could never happen, and this is a totally unrealistic example. But just bear with me.

How might markets react to this mad plan? Traders might buy gold. They would not likely be driving to the local coin shop on Main Street. They would be hitting the Buy button on the screen, and for most of them that is connected to the futures market.

In addition to being a lot more accessible to traders than the London market, futures offer another feature. Big leverage. Like 20:1.

To return to our example, the price of the COMEX futures contract would obviously be pushed up by all this buying. And that creates an opportunity for the arbitragers. They can buy spot gold in London and sell gold futures. They will keep doing that, until the spread narrows to a point.

It’s possible that the price of a gold futures contract could fall below the price of spot gold. This is called “backwardation” (the opposite of the normal condition, called “contango”). The arbitragers can right this capsized boat by selling gold metal and buying gold futures. However, they may not choose to do this even if the profit grows fat. Gold backwardation is a very dangerous condition.

It’s dangerous because it is supposed to be a risk-free trade. You are selling a bar of metal and putting up 100 percent cash to buy a future. There cannot be a margin call. Yet everyone stares at their screens and sits on their hands doing nothing. That’s because there really is a risk. The risk is that the paper contract will not be honored and you lose your gold. This is a fear that the banking system is insolvent, that it will not deliver because it cannot.

Gold backwardation is the harbinger of the collapse of the dollar.

It is also possible, for the price of futures to rise significantly relative to spot. This occurred in the wake of COVID. The reason was that many refiners were closed. Arbitragers were uncertain of their ability to melt a 400oz bar into four 100oz bars. The COMEX market requires the smaller bars, you cannot deliver a 400oz bar. While the refiners were closed due to virus lockdown, it was not possible to convert what one buys in London into what one sells in New York (or it was much harder). So arbitragers were forced to sit on the sidelines, even when a very juicy fat spread appeared.

Here’s a graph of that spread. It’s overlaid with the price of the dollar in gold terms (inverse to the price of gold in dollars). 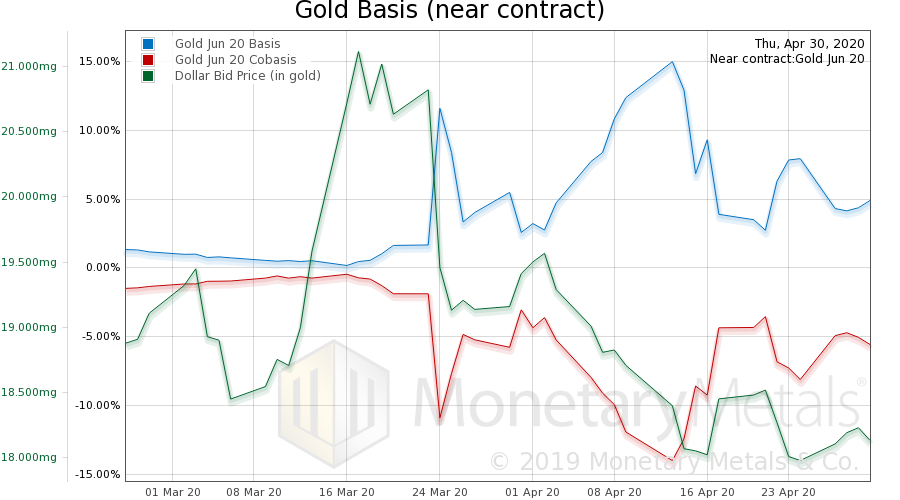 On April 13, the basis – the spread between spot and futures –hits 15% (this is the blue line, just ignore the red line, as there is contango not backwardation). The gold basis is the annualized rate of return, comparable to the interest rate, which one could earn by doing this trade. It works out to about $44 per ounce.

Normally, there is not such a large contango in the gold futures market (little backwardations have been occurring intermittently since December 2008). The impact of lockdown due to a virus was unprecedented.

How About The Retail Gold Market?

The spread between the retail price of gold and the spot price** is significantly more volatile compared to the spread between spot and futures markets. That’s because production capacity, especially for the polished blanks used for coins and minted small bars, is inelastic.

It’s a boom and bust market, and no one wants to invest in buying tooling and machinery to serve temporary demand that could subside by the time the machinery arrives and can be set up. So when retail demand spikes, so do the premiums on these products. For example, instead of paying 5% above the gold spot price for a 1 oz gold Eagle coin, you might have to pay 10%, and have to wait a few weeks for delivery.

When premiums on retail products skyrocket , everyone in the retail gold space sees it of course. And many take to their keyboards to bang out articles about the gold “shortage”. There may be a temporary shortage in retail gold products. But that is not at all the same as saying there is a general gold market shortage.

Virtually all of the gold mined over thousands of years of human history is still in human hands. Gold (and silver) is unique compared to all other commodities. The concepts of “glut” and “shortage” do not apply in the conventional sense. Gold is not mined to be consumed. The production of every mine in the world for a year is tiny compared to the total of all gold mined in thousands of years.

That said, gold can become scarce in the market. That is, when people are scared of banking system counterparties (as in December 2008) they may not take the profit of selling gold and buying gold futures. In this case, backwardation develops and grows.

One should think of backwardation as the indicator of shortage of gold to the market. Whether or not gold Eagles sell for spot + 2% or spot + 20%, that tells you only about conditions in the American retail product market. This is not unimportant, but hardly says anything about the global gold market.

However, if spot gold were 20% higher than gold futures…that could be a harbinger of a monetary and banking crisis (the backwardation in December 2008 was much smaller than this).

Spreads are usually stable. They vary with market conditions, but move much less than prices. When a spread changes, it’s telling us something. And market detectives must look for the cause.

* Many people say “spot” to mean the near-month futures contract. To be more precise, the word “spot” should be reserved for the London bullion bank market (loco London).

** You will always need to pay a premium above the spot price to buy a one-ounce gold coin. This premium reflects the cost of taking a large bar and having it melted down and flattened into a sheet that is then cut into blanks, which are then stamped to become coins. This inventory of coins then needs to be stored, of course, and tracked in a sophisticated high-security vault.