Why This Top Is So Hard to Short 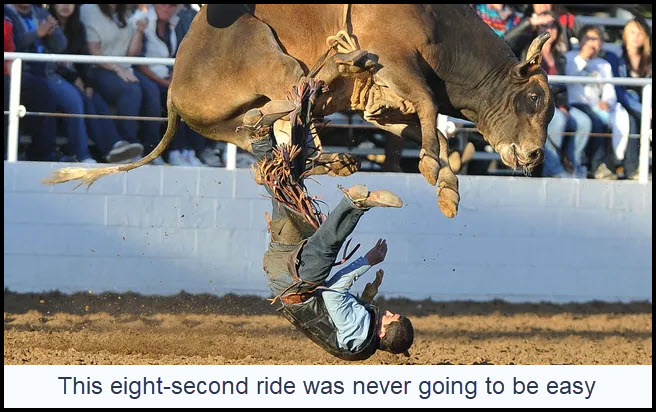 No one said it would be easy to get short at the top. This bull market is proving especially challenging to fade because the herd knows how grotesquely overvalued stocks are. With so many traders eager to bet the 'don't' line, the broad averages have started to behave like El Diablo (see photo above). The Dow has staged three 600-point-plus rallies-to-nowhere since peaking two weeks ago, but none lasted for more than a day. Although bull riders must hang on for eight seconds to claim a prize, traders could conceivably have to endure weeks or even months of loco price action to hit it big. Many will get busted up badly trying.

The 'everything bubble', as it is called, is wherever one looks:  stocks, bonds, real estate, art...African American Barbie dolls. There are more homes listed for $5 million and up than there are Smiths in the Manhattan phone directory. Ironically, gold and silver are among the few investable assets that are not in a bubble. That tells you how badly the players have misjudged the risks of a financial cataclysm. They've gone all-in on bitcoin instead, as though scarcity alone could make cryptocurrency money, a store of value or a hedge against the crash that is coming.

Fed Chairman Powell's every utterance has been the obsessive focus of economists and pundits who make their living taking the central bank's monetary quackery seriously. Does anyone actually believe that credit stimulus will produce an economy healthy enough to service the trillions of dollars in debt we've accumulated desperately trying to keep an asset bubble from deflating? The effort is not only doomed, it is likely to to produce a deflationary collapse featuring a strong dollar and crushing real rates of interest. Sound impossible? Not with everyone on the 'inflation' side of the bet, it isn't. Even $10Tr-$20Tr of helicopter money is just a drop in the bucket compared to the deflationary juggernaut represented by global trade in financial derivatives. It is $2 quadrillion in size, every penny of it effectively a short position against the dollar. If you think the short-squeeze run-up in Gamestop shares was crazy, wait till you see the world's desperate bet on inflation unwind.