14 hours 17 minutes ago
COT Silver Report - August 12, 2022
1 day 22 hours ago
Was $18 Silver the Bottom? Next Pivot? - Lawrence Lepard
3 days 2 hours ago
Silver Coin Premiums – Another Collapse?
4 days ago
The End Game for Silver Shenanigans...
5 days ago
The Fed Is All Talk, and JPMorgan Trial EXPLAINED - Chris Marcus

Why This Wall of Worry Is Different 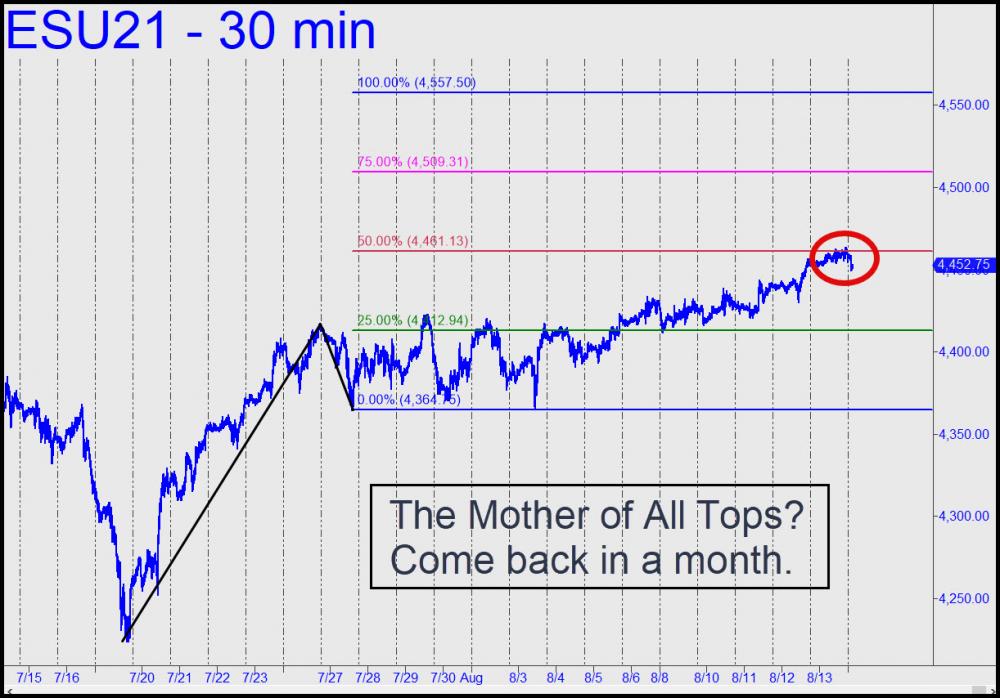 There is increasing confusion in America about how to handle the rapid spread of Covid’s delta variant. The stock market can usually tell us how much fear is out there, but this time Wall Street seems, if not quite clueless, then certainly heedless. The broad averages have moved steadily higher in recent weeks, caused more by nervous short-covering than by any particular bullishness. There have been no dramatic surges, only a steady, ratcheting ascent that suggests an army of bears have been hard at it, trying to get short at a major top. The irony is if they would just relax, bull-mania would end overnight, since the rally is drawing its punching power more from buyers driven by desperation than from any other source. With or without them, though, a very important peak s not likely far off. Delta-lockdown worries are bearing down on markets and nearing the red zone as state governors respond with increasingly onerous restrictions on 140 million Americans who have not yet been vaccinated.

Here in Florida, there are signs that serious trouble could be brewing in the nation’s school systems. In Palm Beach County last week, more than 400 students were quarantined just two days into the school year. Although most of them have not tested positive for Covid, contact tracing has put their school year in limbo. Unfortunately, such turmoil could prove to be a mere squall in comparison to the gathering firestorm in big coastal cities. In New York City, for one, DeBlasio announced last week that the un-vaccinated would be barred from indoor dining, gyms, bars and other places. Not to be outdone, California’s true-blue mayors have already one-upped him with edicts that go even further to restrict movement and commerce. As of Friday, Los Angeles reportedly was considering closing grocery stores and much else to the uninoculated. It is predictable that San Francisco and Chicago will not let L.A.’s quarantine challenge go unanswered.

Things have not yet reached the level of hysteria, but once the reaction to ‘delta’ has run its course, if it ever does, we can expect many businesses that survived the first lockdown to close forever. Crazed investors may have contrived to take the first tsunami of business shutdowns in stride, but reckless obliviousness may not yield such benign results this time (if blowing an epic stock-market bubble can be described as benign).  The giddy rally of 2021 was based in part on the delusion that as long as Amazon, Google, Netflix, Microsoft and a few other category-killers were doing well, then so was America. A spectacular bull market has reinforced this absurd idea, but it flouts reality, since small businesses account for fully half of America’s GDP. Shut down enough of them and the unemployment and falling revenues that follow will eventually take down the consumer economy and the online behemoths that serve it.

It will also affect the real estate market, especially rentals that have attracted big players such as Invitation Homes and Zillow. Such companies have created a bubble of their own by paying outlandish prices for residential properties, then remodeling the homes extensively to attract upscale tenants. In a market as hot as home rentals has been, why should they care about upfront outlays when they can count on a steady stream of ever-rising rent payments over the next ten years? The fatal weakness of this strategy is that tenants are necessarily those who cannot afford to own a home.

None of this recklessness will matter as long as stocks continue to rise. Some technical forecasters seem to think the bull market has a lot farther to go and that the Dow Industrials could double or even triple over the next five to ten years. Although it is impossible to show why this can’t happen, my gut feeling is that the so-called "everything bubble" is about to pop.  It will very shortly be bucking not only seasonal headwinds, but a notorious history of stock market crashes and panics in the September-October period. If past is prelude, then the broad averages are setting up for a memorable plunge. Can we actually identify The Top with technical analysis? Stop by the Rick’s Picks Trading Room and find out for yourself. Shorting lesser tops and making money at it has been our specialty, even if we’ve yet to nail the start of the Big One. The 4461.25 Hidden Pivot in the E-Mini S&P futures that was sent out to subscribers Sunday afternoon is a good example. At the moment, it is working nicely for traders who bet it would contain Friday’s ebullience, if only for a short while.  That is how we roll: take a profit and swing for the fences with the 25% that remains. You don’t need to speculate to benefit from the stock market’s nuttiness.