2 days 14 hours ago
Mint Shortages Further Pressure Supply Amid High Demand
2 days 14 hours ago
Everything Bubble About to Pop? Effect on Silver & Gold? - Lawrence Lepard
4 days 15 hours ago
Can Silver Drop Further? Chaos At The Comex Explained 🚨 - Nobody Special Finance
6 days 4 hours ago
COT Silver Report - September 30, 2022
1 week ago
The Bear Trap – Is It Finally Set?

After The CPI, Watch the Bond Market

Wednesday brings the latest update on U.S. consumer prices. What will it be? Who knows? What matters most to precious metals investors is the reaction in the bond market.

There has been quite a rally in longer-term treasuries over the past two months. As the U.S. economy slides into recession, the rally in bonds has driven the yield in the benchmark 10-year treasury note from a June 14 high of 3.50% to the current 2.79%. See below:

However, the continuing and worsening price inflation data has led the short end of the curve to anticipate more fed funds rate hikes before the recession deepens. So while the 10-year rate has fallen dramatically over the past two months, the 2-year rate is nearly unchanged.

This has led to a dramatic inversion of the yield curve, which is frankly just another sign of impending recession. At present, the inversion between the 2-year note and the 10-year note stands at a whopping 0.49% or 49 basis points. This is nearly unprecedented and the greatest inversion since 1981...which was followed by the deep recession of 1982. 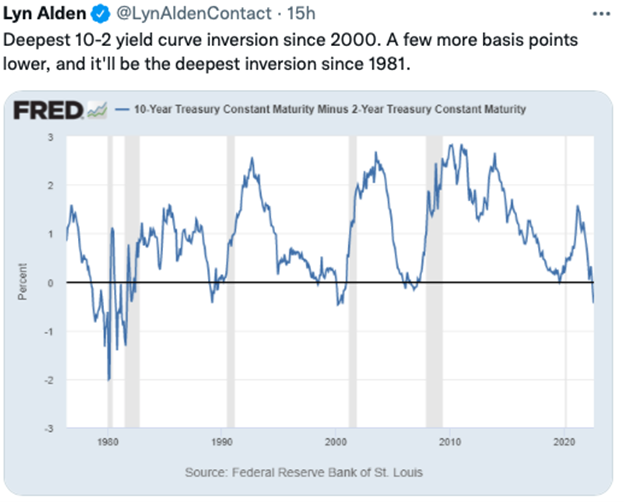 The continuing rally in longer notes and bonds, combined with sticky inflation and inflation expectations, has created the conditions that have led to a sharp bounce and rally in both COMEX gold and COMEX silver. At present, COMEX gold is up nearly 7% from its July 21 lows while COMEX silver is up more than 13% over the same period. Can this continue? Well, in the short term, it all depends upon two things:

Clearly, the key in these scenarios is a rally in the bond market and lower nominal rates, regardless of whether the CPI comes in hotter or cooler than expected. The U.S. economy is undoubtedly tipping over into recession (or is already immersed in one). In reality, the CPI data only reveals whether or not it is a stagflationary recession.

The dismal U.S. economy means that Powell will soon be forced to pivot, no matter what the CPI headlines reveal. As such, COMEX precious metal prices have already bottomed and seen their lows of the year. The only question is where they head in the very short term. To answer that, we'll close this week with two more charts.

Note again that both COMEX gold and silver have recently turned higher. In doing so, and for the first time since April, price has breached not only the 20-day moving average but the all-important 50-day as well. The 50-day moving averages are what must be watched closely in the reaction to the CPI and through the remainder of the week. Should prices now hold above this key technical level and use it as support, the massive hedge fund short positions will be squeezed even harder.

So watch the headlines Wednesday and again on Thursday with the Producer Price Index. Keep an eye on the bond market and let's see where the COMEX precious metals head from here.