2 days 10 hours ago
This Is Why NOW Is the Perfect Time to Buy Silver - Garrett Goggin
2 days 10 hours ago
Rico Charges Dropped On Silver Manipulation Trial
3 days 7 hours ago
Has Inflation Been Defeated?
4 days 21 hours ago
COT Silver Report - August 12, 2022
6 days 6 hours ago
Was $18 Silver the Bottom? Next Pivot? - Lawrence Lepard

If you're a gold investor, then you've likely read of the NSFR of Basel III, which are due to be implemented by the EU-based Banks at the end of this month. Well, here's something else to consider.

First of all, these new capital requirements were first introduced as part of Basel III in 2014, and it has taken nearly seven years for them to be instituted. As of June 28, the EU-based Banks will be subject to these new rules, and the UK Banks must fall in line by January 1, 2022. This, of course, is causing all sorts of chagrin and teeth-gnashing in London. The LBMA and their pals at the World Gold Council put out this final plea for help last month: LBMA Responds to Prudential Regulation Authority Consultation

Regardless of what may happen in January, the move to impose these new restrictions upon the EU-based Banks now appears to be a fait accompli for three weeks from now. Will this have any impact upon the gold price in the weeks ahead? Maybe. No one knows for certain. At TF Metals Report, we've tried to get some diverse opinions on the subject. Here are two recent public podcast links. The first is with Alasdair Macleod, and the second is with Tom Luongo:

But now here's perhaps the most relevant question. What effect, if any, will these changes have upon the Banks that operate in New York on the COMEX? Will any of the U.S. Banks be impacted by these new Basel III restrictions, and if so, when?

Not knowing this answer, I was perplexed. However, late last week, a TFMR member sent me the link below. Could it hold the key to the U.S. Bank reaction to Basel III? I reached out to several experts, and the answer appears to be YES. But don't just believe me and a few of my friends like Alasdair. Click the link below and read it for yourself. 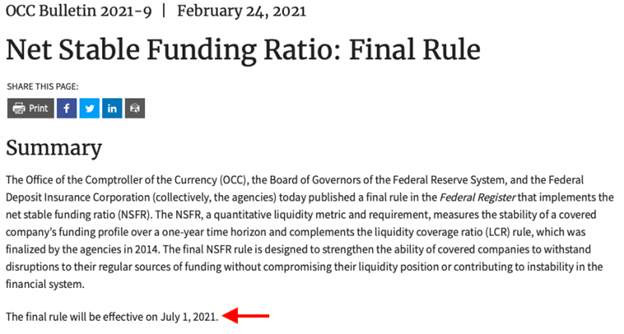 OK, so if this is the case and the U.S. Banks are also going to have to change the way they do "bullion banking" business next month, would there be any way to check to see if they are doing any prep work ahead of the July 1 deadline?

You've likely heard of the CFTC's Commitment of Traders report. This report is surveyed at the COMEX close each Tuesday and is then released 74 hours later on Friday at 3:30 pm Eastern time. However, you may not be familiar with the Bank Participation Report. This report is surveyed from that same CoT data, but it's only compiled and published on the first Friday of every month.

What this report attempts to show is the combined aggregate positions of the major Banks that have operations on the COMEX. You can read about the report by clicking this link to the CFTC website, and you can also see the screenshot below: Bank Participation Report 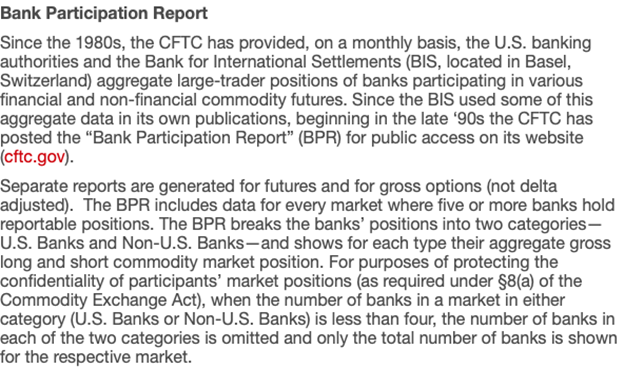 In my experience of monitoring the changes to this report over the past decade, I can tell you that it never shows The Banks to be NET long. Instead, The Banks are ALWAYS NET short. In my records, the largest NET SHORT position of the Banks was 225,111 COMEX gold contracts on 1/7/20. This was followed by 213,746 COMEX gold contracts on 9/5/17 and a lengthy list of reports routinely showing net short positions near 200,000 contracts.

Only twice have these reports shown a small net short position for The Banks. The lowest I can find were at the price lows of late 2015, when the combined net short position was just 30,757 contracts, and again in late 2018 with price near $1200, when The Banks were net short only 23,694 contracts.

So, fast forward to today. Prices have soared in the renewed bull market that began in late 2018 and only once has the combined 25 Bank NET short position been under 100,000 contracts since, and that was on May 7, 2019, and with price still at $1286. Otherwise, The Banks have consistently maintained a NET short position that averaged well in excess of 150,000 COMEX gold contracts.

Again, what we're curious about here is the pending impact, if any, of the Basel III and U.S. OCC restrictions that appear due to come on-line beginning July 1. Could this be revealed by looking back to previous Bank Participation Reports and comparing them to present day? Maybe. So let's do it.

What you see below are changes to the U.S. Bank component of the BPR over the past two years. I could go back further, but all you'd see is a U.S. Bank side that routinely shows an average of 10,000 gross long and about 100,000 gross short each month. You can see this in the first three months listed on the summary below. However, take a look at what has happened over just the past three months: 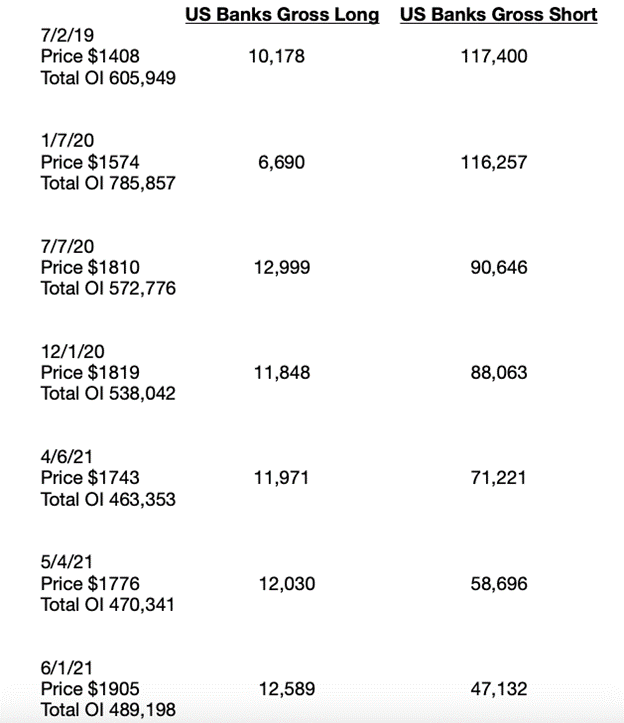 This begs the question...Are the U.S. Banks actively covering their GROSS COMEX short position in order to bring it down to NET neutral by the July 1 OCC deadline?

But we must also consider that the disaggregated Commitment of Traders report still shows a heavily NET short "swap dealer" and "commercial hedger" category. See below:

This is all speculation, of course, because these "markets" and their "regulators" are purposefully designed to be opaque and to keep us guessing. Otherwise, why wouldn't the CoTs be released in 2 hours instead of 74? And why wouldn't the BPR be more specific and state the names of the banks along with the positions? But that's a topic for another day, I suppose.

In the meantime, we'll anxiously await next month's Bank Participation Report to see what it reveals about the combined U.S. Bank position. Will it continue to trend toward equal parts gross long and gross short as the OCC rules go into effect? We'll let you know. In the meantime, ANYTHING and ANY REGULATION that restricts or removes the Bullion Bank's monopolistic influence on the current pricing scheme should be considered a major improvement and a cause for hope in our fight for a free and fair system of true price discovery.