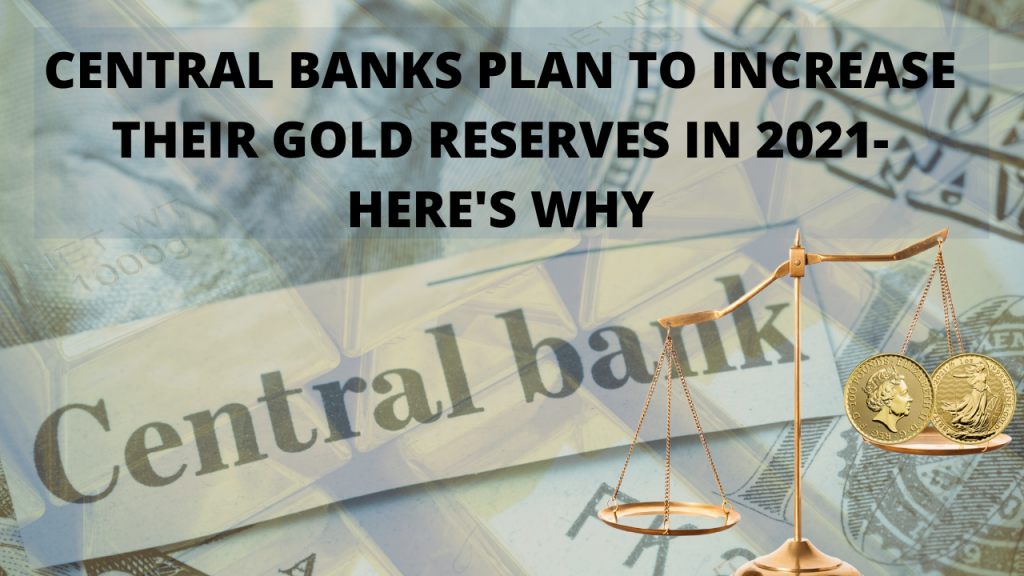 Central banker’s interest to increase their gold reserves made news again this week. Bloomberg’s headline on the topic was “Gold Regains Shine After Central Bank Buying Drops to Decade Low”. The article notes that Central banks may be regaining their appetite for buying gold after staying on the sidelines for the past year.

Central banks from Serbia to Thailand have been adding to gold holdings and Ghana recently announced plans for purchases. As the specter of accelerating inflation looms and a recovery in global trade provides the firepower to make purchases.

The National Bank of Serbia plans to increase its gold holdings from 36.3 tonnes to 50 tonnes because long term, gold is the most significant guardian and guarantor of protection against inflationary and other forms of financial risks.

The recovery in global trade, along with higher oil prices are enabling central banks to start or resume gold purchasing programs. Which some countries, such as Russia put on hold during the Covid-19 induced lockdown restrictions because of the liquidity needed to support its economy.

Here is a simplified example of how these reserves are acquired: when a company in China exports to the US. The US company pays for those exports in US dollars. The Chinese company then deposits the funds into their local Chinese bank, and they are exchanged by the local bank for renminbi.

During times of financial stress, such as the global financial crisis of 2007-09 the US dollar declined against many currencies. Due to which had a significant impact on central banks’ balance sheets.

The World Gold Council on a special paper released on July 6 titled Monetary Gold and Central Bank Capital states: In essence, when the USD loses value against national currencies, central bank balance sheets incur revaluation losses, which can erode their core equity during periods of extreme stress or volatility.

At times, this erosion reaches such a level that central banks are forced to ask their governments for recapitalisation, prompting questions about their competence and often impeding their ability to operate effectively.

Central banks do not have the same tools available to limit exposure to this currency risk as other investors and commercial banks. Central banks cannot use hedging strategies such as swaps or options for example. However, diversifying these reserves into gold is an option that is available to central banks.

The WGC paper goes on to note that, this phenomenon was clearly in evidence in and around the financial crisis. At that time, however, it became apparent that central banks which held monetary gold as part of their foreign exchange reserves. That seemed better able to preserve their equity positions than those which did not.

Central banks have been net buyers of gold since 2010. Also, collectively the central banks hold just over 35,000 metric tonnes of gold. Gold is about a fifth of all gold ever mined.

As noted above, the central bank net demand for gold decreased in 2020 due to Covid-19. However, this demand appears to be increasing again as countries recover. This week Russia’s finance ministry has said it would buy 296 billion roubles, equal to US$4.04 billion, in gold over the next month.

The charts below show the net-demand from central banks, along with the total gold holdings of individual countries. The US, with 78% of its foreign reserves in gold, holds the most gold at 8133 tonnes.