A regular reader of these weekly columns will recall that the Fed first warned us of their intentions back in April. The U.S. markets had held firm in the months that followed but now finally appear to be on the verge of a crash.

As you likely know, the old adage is "don't fight the Fed", so when the Fed tells you that they intend to “inflict losses” and “cause pain”, you should probably take their word for it. At TFMR and through our writings here for Sprott Money, we’ve been on “Crash Watch” ever since Jerry Powell’s speech at Jackson Hole. It was just last week that we posted this latest update:

Again, though, the concerns for the U.S. equity markets actually began back in April. What happened then? Here’s the former head of the NY Fed, Bill Dudley, giving us all a warning in no uncertain terms: Fed must ‘inflict more losses’ on stock-market investors to tame inflation, says former central banker

In the five months since, we’ve written about this on four occasions. Here are the links:

And why should a precious metal enthusiast be concerned with a crash in the stonk market? Because an equity crash almost always leads to a liquidity squeeze where ALL assets get sold due to margin pressures and a desire to raise cash. This applies to COMEX gold and silver, too, and you only need to recall 2008 and 2020 for proof.

So now, as the title of this post states, we’re officially moving from “Crash Watch” to “Crash Warning”. Why? Primarily because the sharp move higher in both nominal and real interest rates will soon become too heavy of a burden for equities to bare.

Could it be a swift move through 4.00% on the U.S. ten-year treasury note that does the trick? So far, the markets have been able to shrug off higher nominal rates, but you may recall that it only took a move to 3.25% in 2018 before equity disaster struck. Perhaps a ten-year yield above 4.00% would be a bridge too far this time? Perhaps. Either way, I think we're about to find out.

However, the more important driver of equity and gold prices is actually "real" or inflation-adjusted interest rates. When real rates are negative (inflation expectations exceeding nominal rates), "risk assets" generally do well. However, when real rates turn positive, the opposite is true.

The simplest way to measure changes to real interest rates on a daily or weekly basis is by following the TIP ETF. This fund exclusively holds U.S. Treasury Inflation-Protected Securities, and it rises and falls inversely with real rates. As you can see below, this fund has had an awful 2022 as real rates have risen sharply. In fact, with a current price near $106, the ETF is currently trading at levels not seen since February of 2011.

And here's where it gets concerning and why we have upgraded our Crash Watch to a Warning...

The chart below is a weekly chart that plots the TIP and the big S&P 500 ETF, the SPY. You can plainly see the very tight, long-term correlation. The TIP is in candlesticks and the SPY is shown as a blue line. 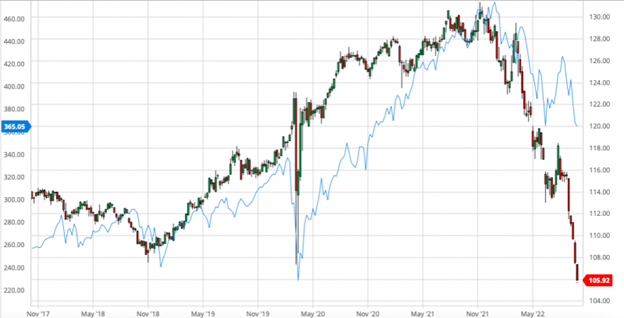 Do you get the sense that there are three possibilities?

If the TIP remains near 106 or moves even lower, it's difficult to see how stonks remain firm. The chart above suggests a drop to near 250 on the SPY or about 2500 on the S&P 500. That would be a drop of about 30% FROM HERE! If you own mutual funds in your retirement accounts, are you prepared for this possibility?

The chart below shows this, too. Note that since the paradigm-shifting event of QE1 in March of 2009, the S&P 500 has fallen back to the same trendline on multiple occasions, all of them coinciding with some move by the Fed to jawbone or otherwise act to move interest rates higher. Isn't 2022 just the latest chapter in this ongoing trend of Federal Reserve shenanigans?

Unfortunately, COMEX gold as a "risk asset" shares the same concerns. Below is another plot of the TIP in candlesticks, but this time, COMEX gold is the blue line. Could a liquidity-driven dip below $1500 be coming? It certainly appears to be a possibility. 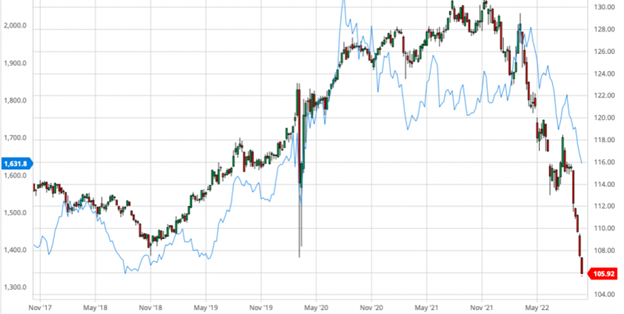 In the end, of course, the Fed will capitulate. They will have no choice, and the next QE and rate cut program is going to melt your eyebrows. The metals and miners will soar accordingly, but that's only after we are forced to endure again some 2008 or 2020-level pain.

Keep watching this space for updates and the eventual issuance of the "All Clear", but for now, please understand that the crash that appears to be coming could materialize at any time, and once it does, things are likely to get disorderly quite quickly.

Again and as always, prepare accordingly.