Finally, the Wind May Have Shifted for Gold 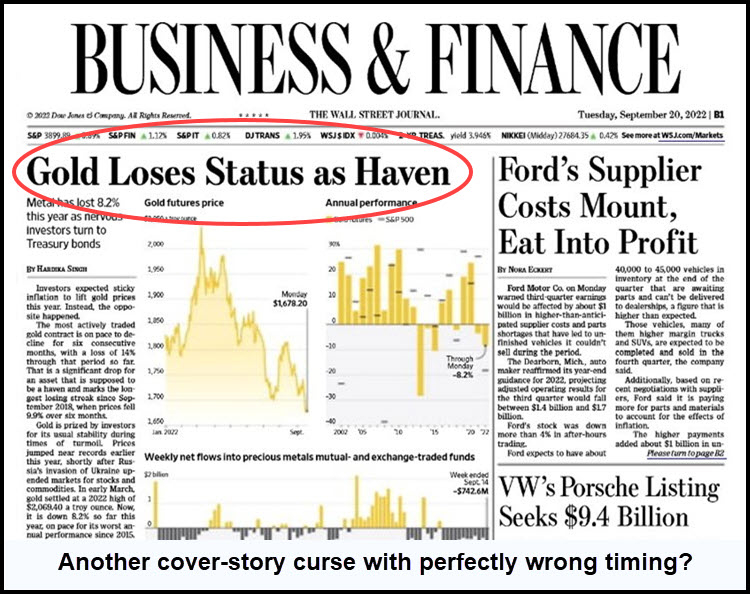 Gold Loses Status as Haven, declared a headline in the Wall Street Journal on September 22.  Two days later gold fell to $1629, the lowest daily close in more than two years; then it began an ascent that has continued to this day. A case of yet one more cover-story curse signaling a major trend change?  Quite possibly.

The backdrop for gold's rise is a commodity bear market that dragged along for 48 years but which appears to have bottomed in 2020 with a false breakout in the CRB Index. False breakouts often signal trend reversals, and so far this indicator seems to be working. The commodity bull has unfolded with enough vigor, seemingly, to last for a decade or longer. As for gold, it recently began to show signs of life following a steep selloff begun last March. The GDX:GLD ratio that tracks the relationship between mining stocks and the price of gold looks like it is breaking out, with miners outperforming bullion. This is usually an early sign that the precious metals market is about to shift into high gear.

Because gold and silver can be expected to make their biggest percentage gains near the end of their respective bull markets, there is still time to board the train and start accumulating. Before this bull market has run its course, I expect gold to hit $10,000 per ounce, and silver $350. A barrel of oil will be quoted at $250, and the HUI Gold Bugs Index, currently trading for around $275, will be trading north of $1,200.

Furthermore, the implosion of crypto is very bullish for junior miners, since speculative money will return to its natural home in bullion. Michael Saylor, a big player in the crypto world, tweeted the following last week: "If it has counterparty risk, it’s not money. #Bitcoin."  The timing of this was ironic, since the world's second-largest cryptocurrency exchange, FTX, went belly-up on Friday. Just a week earlier, high-profile investors, including some Silicon Valley billionaires,  were still shoveling money into FTX. Now they likely understand that the exchanges themselves are the counterparty risk.

Some will still argue you can put all of your bitcoin holdings on a thumb drive and avoid exchanges. But do you really believe the average consumer will put up with the hassle?  FTX's competitors -- OKX, KuCoin, Poloniex and Huobi -- immediately told their customers they would do a "proof of reserves" to let them know whether their Bitcoin funds were actually there. I come from a different generation – a generation where verifying one's reserves entailed lifting one's mattress to determine whether your gold, silver and ammo were still safe and sound.  My gut feeling is that we are going back to the way things used to be.