Gold Absorbing Nothing Other Than Sleep

Asleep indeed is our once mighty Gold. Fortunately, when there's not a lot to say, we can always look at pretty pictures, for each is worth a thousand words, (if not in due course thousands to one's wealth). To wit:

Below in the lower left panel is Gold's EDTR ("") from one year ago-to-date. That's right, Mel, it has slumbered back down into August's Dog-Day Doldrums of only 20 points, even as the world's economic wheels come off. Completely aloof to it all is Gold. Or as we've herein stated in recent weeks, "Nobody cares." Say no more: 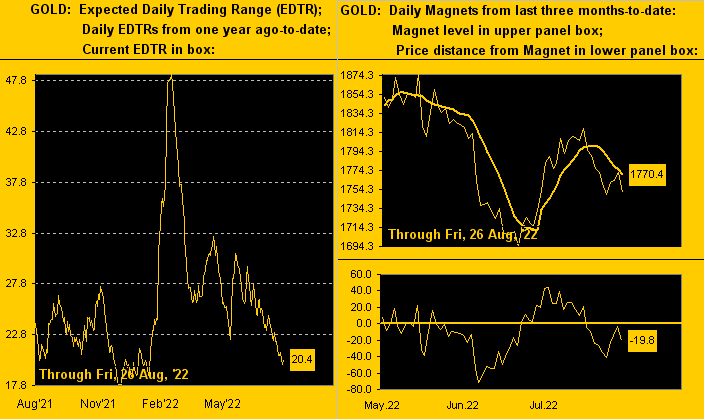 Above in the upper right panel we've the last three months-to-date of Gold's daily closing price astride its "Market Magnet" which is the thicker line currently labeled 1770. The oscillator (price less magnet) at the foot of the panel clearly depicts Gold as being unable to get out of its own way and escape the attraction of the magnet, (which indeed is the latter's intended role as you website followers know). Regardless, by either the EDTR or Magnet, Gold's movement these days is sufficiently squished.

Gold settled its trading week yesterday (Friday) at 1751, from high-to-low by percentage its seventh-narrowest such stint year-to-date. Not even Federal Reserve Chairman Powell -- in cowboy style having just shot the stock market in the foot for the balance of this year -- could nary stir Gold a wit. ("Snore.........")

Specific to the S&P 500, yesterday post-Powell produced the year's second-worst single-day high-to-low percentage drop (-3.5%). In turn, the S&P broke below the recently-built structural support of the 4100s. And on the heels of a comparatively weak Q2 Earnings Season combined with increasing interest rates, the S&P's ducks are aligning to (finally) give a true test to the more dominant underlying support structure spanning from 3600-3200; it almost so did back in June, and today's fundamental mess makes it all the more right for said test. (Note to the informed: September commences on Thursday).

And yet given all that, Gold is barely budging as exemplified here by the rightmost weekly bars, even as the blue dots depict the present parabolic trend as Long despite price drifting further below its 1779-1854 resistance zone: 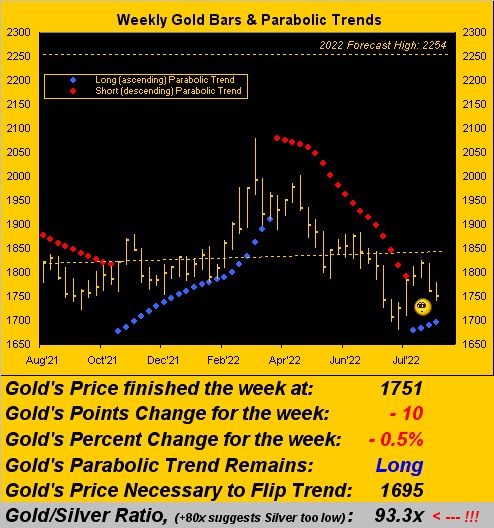 Query: what ever happened to the Inflation Reduction Act? For it must be said that the Fed remains in its stead for higher rates ahead, even as its favoured inflation gauge -- Core Personal Consumption Expenditures -- was practically "inflation-less" for July.

Still, Q2's Gross Domestic Product (per its second of three readings) was just revised from shrinkage initially of -0.9% to only -0.6%. 'Twas just the fifth time this century (86 quarters) that a GDP shrinkage reading has been revised to less shrinkage by +0.3% or more. ('Course, the dirty little secret is that the Chain Deflator component itself was revised higher by +0.2%, meaning that REAL GDP shrinkage was only lessened by +0.1% ... but again, we're not supposed to point that out). As for those of you scoring at home, come 29 September we'll see the finalized Q2 GDP.

Moreover with respect to Q2's GDP shrinkage, the ever-venerable Reuters ("Since 1851!") indubitably stated that "Underlying Data Show No Recession". Fantastic, that! Let's go to the Economic Barometer: 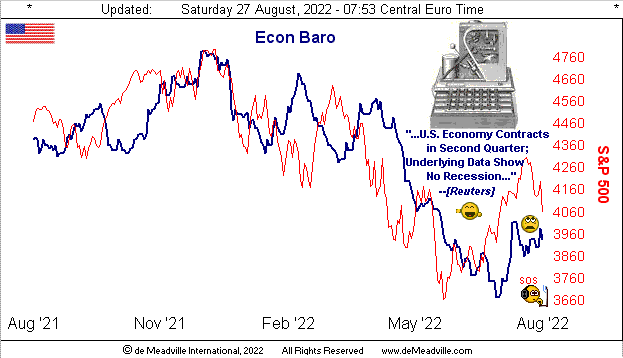 No recession aside, notable metrics for the Baro this past week showed weaker month-over-month July readings for Durable Orders, for both Personal Income and Spending, and for New Home Sales.

Then came this from a survey by PricewaterhouseCoopers (yes 'tis all one word) that some 50% of Stateside companies are poised to cut jobs. Uh-oh. Further, as stated by Foxy: "The survey comes amid growing concerns that the Federal Reserve's war on inflation could trigger a recession." (You cannot make this stuff up; where has Foxy been these past eight months?).But then as noted, rival Reuters has thankfully said there's no recession. The FinMedia go by their fellow parrots; we go by the numbers.

And no recession dovetails well with Atlanta FedPrez Raphael "The Boss" Bostic's notion (on Thursday) that thoughts ought be tempered about a reduction in the FedFunds rate, albeit he is sensitive to foreign economic aspects' effects on StateSide affairs and Fed policy. That according to the Wall Street Journal, which just two days prior (on Tuesday) ran with: "Global Economies Flash Warning of Sharp Slowdown Business activity in the , Europe and ". So we're lucky there's no recession. (Pssst: Got Gold?)

Here we've another two-panel portrayal of Gold, its daily bars from three months ago-to-date on the left and 10-day Market Profile on the right. The baby blue dots of trend consistency have been magnificent leaders of price throughout, whereas the Profile's overhead resistors shall require some real buying power near-term ("Snore.........") to overcome: 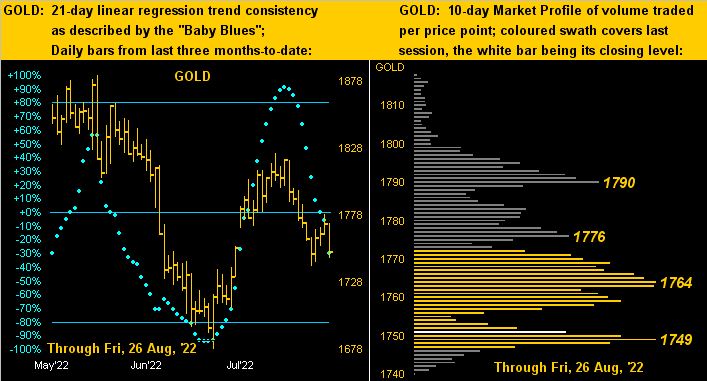 For Silver, the nearly identical patterns to Gold continue, her "Baby Blues" (at left) as guiding lights to price direction, which in turn finds price in the Profile's (at right) basement: 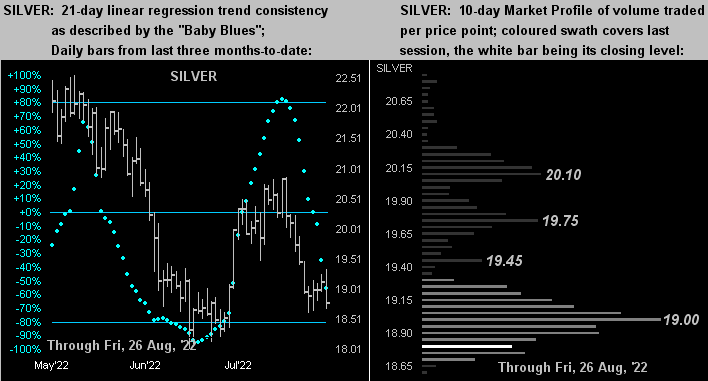 Did we mention than September starts next week?

Alright, Squire, we're just trying to build a little drama into these Dog Days. The point is: September for the S&P 500 is on balance a losing month. Spanning the 52 years from 1970 though 2021 inclusive, no matter how you slice it and dice it, September comes up negative. The average change across those five decades for September is -0.8%; or in "trimming the mean", 'tis still -0.5%; or even if in denial by pointing to the median, you get -0.2%. Cue Jefferson Starship from '84:

Oh there was the +9% outlier in 2010 as the economy roared back from the FinCrisis. But there've been five Septembers with net losses ranging from -8% to -12%; and given the aforementioned earnings weakness within a rising interest rate environment, the best protective place may well be in the depths of your (albeit sleepy) Gold bunker! 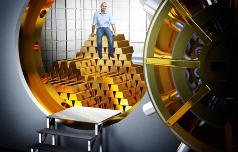