Six weeks have passed since Gold's weekly parabolic trend flipped from Short to Long (at 1745 on 10 November). And based on the prior ten Long trend follow-through by points, we've herein been remindful throughout that 1900 is possible on this run, whilst duly admitting that the 1800s are structurally resistant. With Gold having settled this past week yesterday (Friday) at 1803, (price having traded during this trend as high as 1837 on Tuesday), the gauntlet has been thrown by the value-savvy fundamentalists at the skeptically-scheming technicians (and, if you like, the price suppressing scalawags: scandalous!) 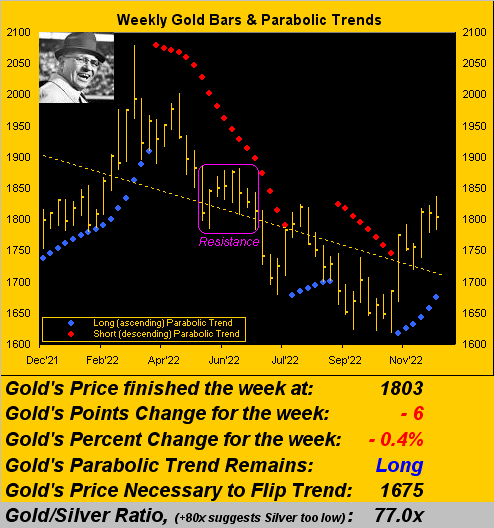 Nonetheless, we've three notable takeaways from the above graphic:

■ The dominant dashed trendline across the chart's entirety not only is negative, but price's current excursion above it is excessive, unless the tide truly is turning up;

■ Looking leftward from the rightmost bar (per your Technical Analysis 101 class) toward the purple-encircled resistance box clearly is indicative of it being challenged right now, success up through which would bring that 1900;

■ The current blue-dotted parabolic Long trend continues to afford plenty of wiggle room given the noted "flip" level is -128 points below current price, such that Gold can accommodate some near-term pullback without breaking that uptrend.

"By why think about any pullback at all, mmb?"

A rhetorical question there from Squire, who himself developed our "Nothing Moves in a Straight Line Dept." But this is why we created a website with unique analytics. To wit via our year ago-to-date Market Value graphic for Gold: 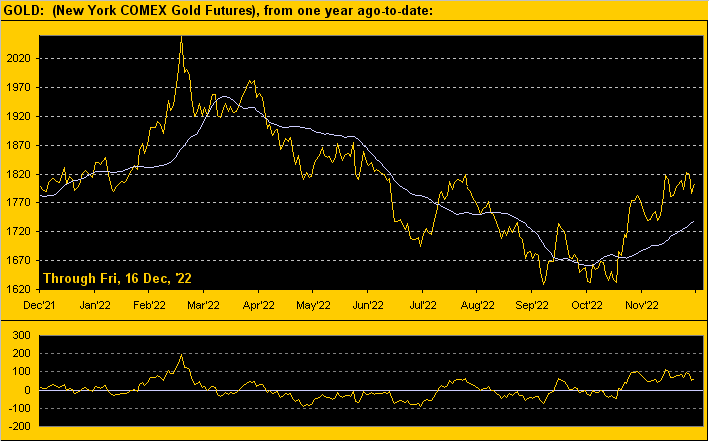 The upper panel displays the daily closing price of Gold. The smooth grey line running through price is our proprietary valuation for Gold per its daily price movement relative to those that make up the other four primary markets to which we regularly refer as BEGOS: Bond / Euro / Gold / Oil / S&P. The oscillator in the lower panel is the difference of price less valuation, which (strictly by this analysis) suggests Gold is at present 66 points "too high" as price and valuation inevitably shall revert toward one another. Thus in this "vacuum": current price 1803 - valuation gap 66 = 1737. Hardly are we rooting for that, but should it occur near-term, 'twould not be enough to nix the present weekly parabolic Long trend. Cool, eh?

Let's look too at the website's Market Magnets for both Gold left and Silver right from three months ago-to-date. By this construct, both the yellow and white metals are at present perfectly priced given they're both essentially on their respective Magnets (the thicker line), the deviation of price from Magnet as shown in the lower panel oscillators: 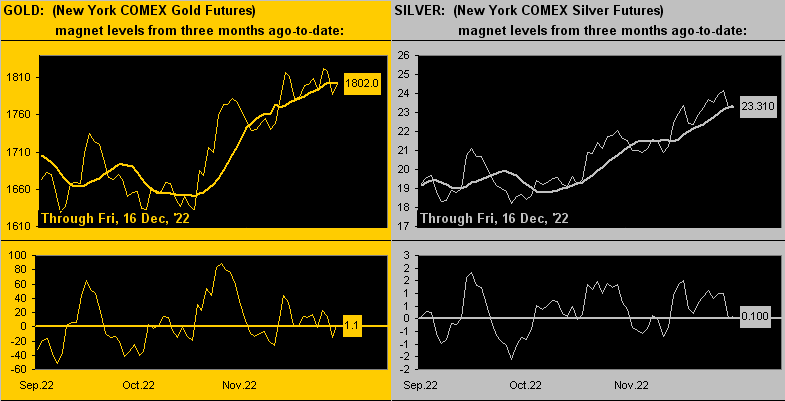 So: by the weekly parabolic trend Gold goes higher notwithstanding the resistance of the 1800s; by its BEGOS Market Value Gold goes lower a bit near-term; and by its Market Magnet Gold goes nowhere. Where else shall you find such finely-tuned analysis?

Reiteration: regardless of which way the gauntlet is thrown, Gold by currency debasement "ought be" +124% higher than present 1803 price right now. For we know historically that the price of Gold always catches up to prior levels of Gold valuation by debasement: and 'tis way overdue to recur, not having happened since 22 June 2012. That is why you own Gold right now!

But let's stop puffing the chest and go to the rest, beginning with the StateSide Economic Barometer's suddenly losing its zest. For during this past week, 13 metrics hit the Econ Baro, of which:

■ Just two were mildly encouraging as Initial Jobless Claims (the weekly report that makes economic headlines when there's nothing else about which to write) declined, as did Import Prices (ex-Oil);

■ The balance were poor, notably December's New York State Empire Index flipping from positive to negative whilst the Philly Fed Index remained sub-zero. Moreover (or perhaps better stated "Moreunder") the following metrics all were worse month-over-month: November's Retail Sales both headline and core, the Consumer Price Index both headline and core (slowing inflation a function of the economy also slowing, e.g. "We can't sell our stuff at these higher prices"), Industrial Production/Capitalization Utilization, Export Prices (ex-Agriculture), the Treasury's Budget Deficit (e.g. can Janet "Old Yeller" Yellen come up the interest dough), plus a backup in October's Business Inventories (which for you WestPalmBeachers down there means product ain't movin' as fast). Here's the result of it all (deep breath...): 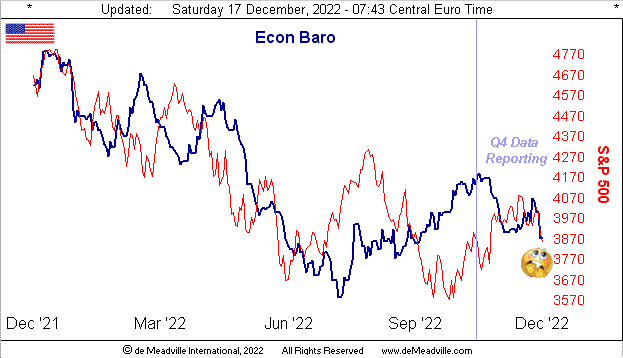 As depicted in the chart: the data to the right of the vertical lavender line is basically for Q4 thus far, which is starting to mitigate the "end of recession" recovery we had in Q3. Further for next week's set of 14 incoming metrics, only 3 by "consensus" are expected to improve. --> "Got Gold?"

And yet, (courtesy of Dow Jones Newswires), we read that "Investors Grow More Confident of a Soft Landing" and that "Mutual funds and hedge funds are putting money in stocks that would benefit from slowing inflation and falling rates." We're not privy to what those "stocks" may be; however given the "live" price/earnings ratio of the S&P 500 settled Friday at 36.4x with a yield of just 1.682% (vs. 4.163% annualized for the 3-month U.S Treasury return), we've no desire to be near any equities, save for "The Golds". Yet even as the Fed downshifts a gear from +75bp to +50bp, their upside target is higher still? What was that phrase with regard to Powell's Presser on Wednesday? "Emphasize the pain"? --> "Got Gold?"

Elsewhere as we cue The Ramsey Lewis Trio's "The In Crowd"from back in '65, joining the Federal Reserve in the +50bp Club Conga Line are The Bank of England, The European Central Bank, und der Schweizerischen Nationalbank. (Or collectively is that instead -- quite literally -- "The Hustle"--[Van McCoy and the Soul City Symphony, '75]?) --> "Got Gold?"

Here we've got Gold regaining some linear regression uptrend consistency as next shown on the left in the panel of daily bars from three months ago-to-date, the blue dots therein getting a bit of a foothold by the day this past week. Similar is the case for Silver on the right. And for both precious metals, notice their respective rightmost bar (Friday) having completed the session near the high trade of the day: 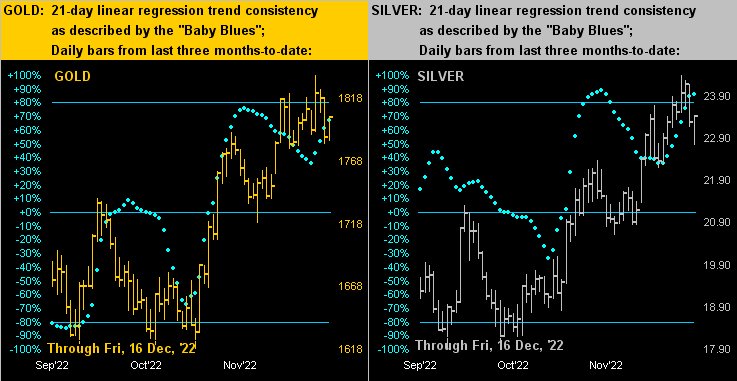 As to their 10-day Market Profiles for both Gold (below left) and Silver (below right), price settled the week amidships. The good news here per the denoted key apices, there appears more underlying support than overhead resistance: 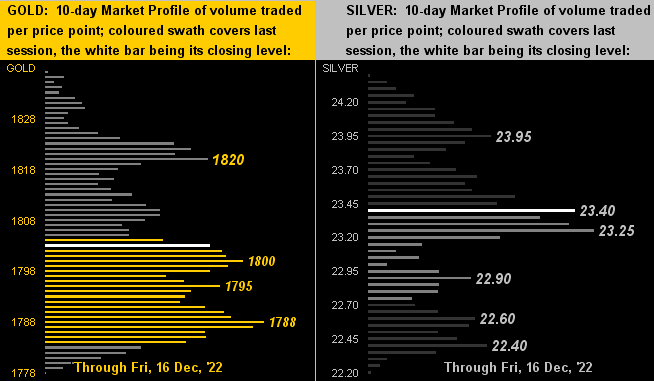 So ahead of the final full trading week in 2022 -- indeed all told there are just nine trading days remaining for this year -- we'll wrap it here with this from Le Figaro in neighbouring , (credit Danièle Guinot):

"'It's a disaster, we've never seen this': hemorrhage of advisers in bank branches." Therein a client from our old haunt SocGen likens his branch to a "ghost agency" with no advisors and four empty offices.

And let's face it: is being an investment advisor actually a job you'd really want now? To be sure, the "sure thing" stock market has become a vastly-overvalued comprehensive crap shoot, (see the aforementioned "live" P/E of the S&P). So much so that the odds of making money are perhaps better by playing the dozens or columns on the single-zero roulette wheel in the Casino de Monte-Carlo rather than staying with stocks. Alas, the once easy glamour of being a money manager is now terminé. Or to quote Dan Rowan: "Say g'nite, Dick!"

But with your gauntlet at the ready, always say "Hello!" to more Gold! 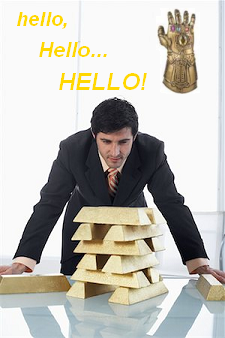