Gold Seeker Report Issue #36 ~ This Week In Mining: Catalysts on the Horizon

The metals remain in a trading range as do the mining stocks likely due to the both the upcoming election and the announcement of the next stimulus bill, which is coming closer to both parties agreeing on. I don’t think we will get one before the Nov 3rd. But it is immaterial whether we get one next week or a month from now as there are likely multiple stimulus packages coming down the pike. It is wise to keep some dry powder in the case of sell-off once the winner of the election in announced, which could cause a general market sell-off; if significant enough could put downward pressure (temporarily) on metals and miners. I think you know who I’m talking about.

Battle North: Published the results of the Feasibility Study (FS) on its Bateman Gold Project. Summarizing the FS results: 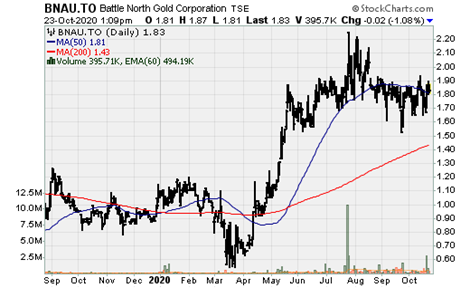 Fiore Gold: Achieved its FY 2020 production guidance and continues to increase liquidity. Fiore produced 46k oz. Au for its FY 2020, with a closing cash balance of $23.2m. By deduction we can estimate fee cash flow during the quarter of $5.9m on production of 12.43k oz. Au. 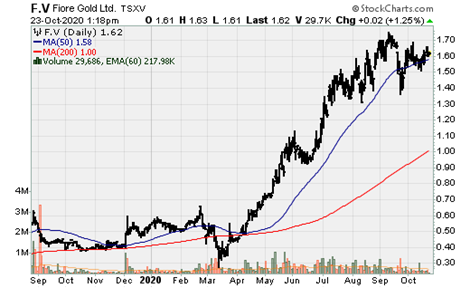 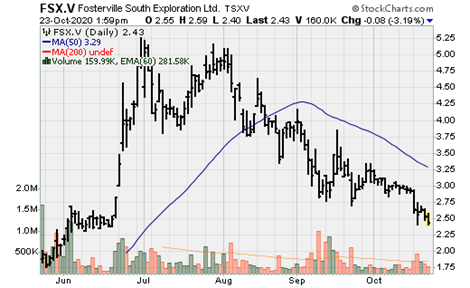 With Robert Friedland as Chairman and Paul Matysek as CEO, the company undertook a comprehensive review of the geological models and near-pit resource potential of the company’s Upper Puruni concession and the Toroparu Au-Cu deposit. Gold-X hired HPX, a private mineral exploration company (founded by Friedland) as well as SRK consulting to review the existing data and design an expansion and definition drilling program. HPX discovered several structurally controlled high-grade gold bearing structures within the Toroparu Main and Toroparu NW zones as well as several prospective zones for shallow mineralization identified by SRK within the Toroparu NW Zone, a 2 km extension of the Toroparu Main zone delineated during exploration drilling from 2011 to 2013.

Both believe the results of this review have opened the possibility of significantly optimizing the current mine plan. In all likelihood, output could be increased and/or costs will fall as well as the potential to reduce initial capital costs. 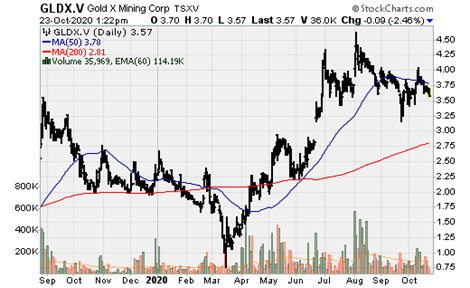 Not only will K92 see significant near-term growth beginning in 2023, more than doubling production to >300k oz. Au from its low-cost ($125m capital requirement) phase III expansion. What is overlooked, however, is that the Phase II expansion will leave 400ktpa on care and maintenance. This could increase throughput and in turn production up to 40% for minimal capital. The company is in elephant country and has had tremendous exploration success. If this continues, such as in this news release, it is highly probable. The big drawback, however, is that its mining lease needs to be renewed in 2024 and after watching what the government did to Barrick regarding Porgera (the government will take a 50% ownership of the tier-1 operation), which makes this above average risk. 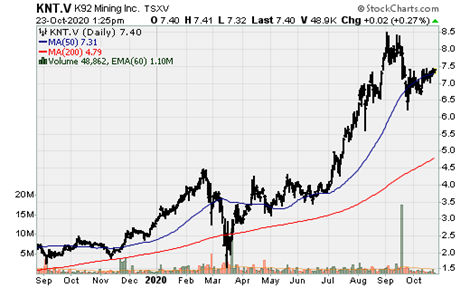 In the upcoming Goldseeker (subscribers only @ Goldseeker.com), we will be using relative valuation (P/CF, FWD P/CF, and P/NAV) comparing 8-10 high quality junior producers to determine which should yield the highest returns, K92 would be among the top, however, given what has been going on in PNG; a much higher discount rate is warranted; but will it still rank near the top?

Kirkland Lake Gold: I first bought a position in Kirkland Lake Gold in late 2008 because of the potential I saw in the Maccassa mine and the land package, which hosts multiple past-producing, exceptionally high-grade mines. The 10/19/2020 news release continues to demonstrate the longer-term potential of this asset.

Kirkland Lake Gold Intersects Exceptional Gold Grades at Macassa Near Contact of South Mine Complex (SMC) and Amalgamated Break (AMALG). The following are key intercepts in the SMC, lower SMC (LSMC) and AMALG: 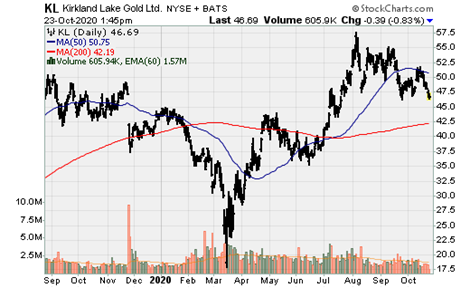 MAG Silver: Announced first production from Juanicipio. Production will remain muted as Fresnillo expects to process 16 tons/month at the Fresnillo mill until mid-2021, when the Juanicipio mill is scheduled for commissioning. During the quarter 42.4k tons were processed; with attributable production to MAG of 173.4k oz. Ag, 268 oz. Ay, 60.7 tons Pb and 76.6 tons of zinc. This cash flow will be used to reduce the remaining capital investment to finish building the mill. Production should increase, at least marginally from Q3 as quarterly processed tons will increase to 48k and the first production stope coming online in Q4. 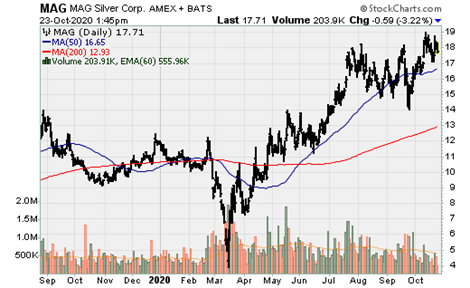 Metalla Royalty & Streaming: The company while quite over-valued relative to its peer group, continues to makes smart albeit smaller royalty acquisitions, this time acquiring an existing 1.0% NSR royalty on Minera Alamos’s La Fortuna development project. At it stands now, the operation will come-online approximately 12-14 months after it is fully permitted and after the construction of its Santa Project and 1st expansion (likely mid-2023). Initially it will produce 50k AuEq oz. annually (500 oz. AuEq attributable to Metalla over an initial 5-yrs). The objective is to increase the mining rate to feed the mill at capacity (2ktpd vs. the initial 1.1ktpd), however, the company needs to increase resources first. Operating at 2ktpd, average attributable production to Metalla would be roughly 900 oz. p.a., likely starting later in 2023 or 2024. 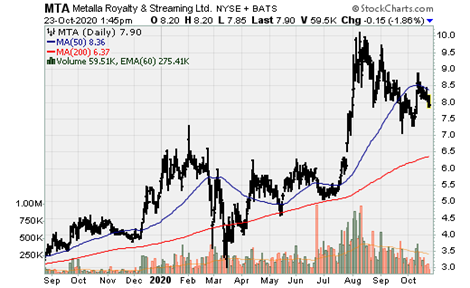 Osisko Gold Royalties: Most royalty and streaming companies have been impacted due to mining suspensions in Q2 2020, although Osisko was more marginally impacted. The company has attributable production of 16.7k AuEq oz., generating revenue of C$55.7m, of which the company generated a margin of C$40.5m. Excluding offtake agreements, the company generated a margin of 96.40%. Production should increase in Q4 and the company will see material growth over the next 5yrs as many of its larger assets come-online. 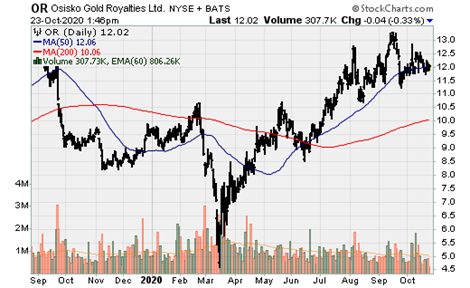 Roxgold: The company produced 33.56k oz. Au In Q3, maintaining guidance. This is from Yaramoko, which has high potential to increase the mine life of the asset. The real gem of Roxgold is its near-term development project, Seguela, which will be optimized, and likely enlarged relative to the last technical report given the countless high-grade intercepts after the publication of the report. 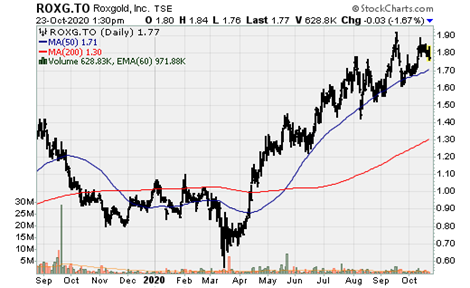 Victoria Gold: The company continues to have significant exploration success that should, over-time (if not acquired), lead to expanded production (due to higher grades) and a greatly increased mine life. Victoria hit two significant, high-grade intercepts at Raven of and expands Raven to over 750m in strike length. Highlights for 13 new drill holes at Raven include: (Note: Reserve grade is 0.65 g/t Au)

Raven remains open in all direction at to depth. For an in-depth report on Victoria Gold, including valuation at current gold prices, visit Goldseeker.com. 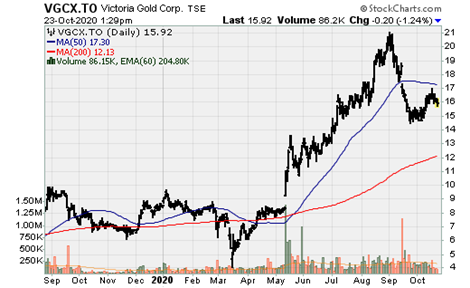 Wallbridge Mining: Wallbridge continues to expand its high-grade Fenelon Project. This could truly be a district play, which we will find out in due course as the company fairly recently acquired Balmoral Resources, expanding its land package. Wallbridge released the results of the first of five wedge cuts. some Highlights include:

Additional in-fill and step-out results on from the Tabasco and Cayenne zones are as follows:

Most of these are near surface and could be considered high-grade. The underground component such as the Area 51 U/G is higher grade on average. Area 51 and other select areas highlight material underground, high-grade resource potential, with the optionality of bulk mining scenarios. 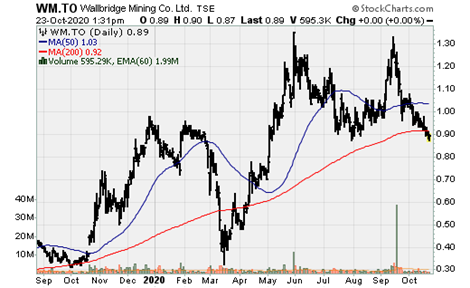