2 days 12 hours ago
Mint Shortages Further Pressure Supply Amid High Demand
2 days 13 hours ago
Everything Bubble About to Pop? Effect on Silver & Gold? - Lawrence Lepard
4 days 13 hours ago
Can Silver Drop Further? Chaos At The Comex Explained 🚨 - Nobody Special Finance
6 days 3 hours ago
COT Silver Report - September 30, 2022
1 week ago
The Bear Trap – Is It Finally Set?

We continued to trend lower this week, with the miners getting hit especially hard. From a technical perspective, there should be more downside in the gold price, but given what's going on globally, this may not happen, but it will be met with strong buying if it does. Mining equities are trading with an implied gold price well below current spot prices, so the question remains; are the mining equities portending a drop in the gold price, or have what otherwise would be buyers flocked to the mainstream momentum stocks and/or bitcoin? We will have to wait and see. Nonetheless, there are some excellent deals for medium to long term holders in the gold stocks.

It was a rather quiet week following earnings season, although we did see some M&A activity with Endeavour making a $1.86b bid for Teranga gold. More M&A could take some time as countries in West Africa weren’t hit nearly as hard as most countries in the America’s. Please visit Goldseeker.com to try out our risk-free 30-day free trial or subscribe to our free email list.

Calibre Mining: One of our favorite junior producers at Goldseeker.com provided a generative exploration program update. The company is focused on identifying near-term, organic growth opportunities to complement and leverage the company's Hub-and-Spoke strategy. As I've said many times over the last several months, Calibre will beat its guidance over the next several years. More recently, the company provided multi-year production and cost guidance at both Libertad and Limon, which I believe will prove quite conservative.  If successful at providing enough mill feed to operate the Libertad mill at or near capacity, this could increase companywide production to 220-260k oz. Au (depending on grade).

With over 1mtpa of excess mill capacity at Libertad, the company is attempting to fill this gap. The Company has launched an aggressive program to systematically evaluate the broader potential of its approximately 1,200

) that exhibit similar geologic characteristics to the bonanza-style epithermal gold systems at Limon, Libertad, and Pavon. The Eastern Borosi project is clearly another "spoke" but may take some time to develop and further explore to grow resources past the current 700k oz. Au. 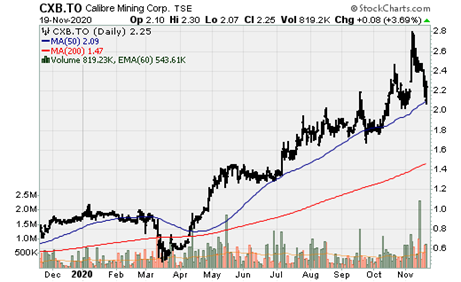 Bluestone Resources: A company we continue to monitor closely at Goldseeker, continues to intercept bonanza gold grades at its Cerro Blanco project in Guatemala. Bluestone reported additional assays received from the on-going drill program in the South zone. These results confirm the continuity and high-grade nature of the epithermal vein mineralization, including several bonanza-grade intercepts and the highest-grade assays thus-far. Highlights in this press release include:

Endeavour Mining: Announced the acquisition of Teranga Gold in a zero—premium merger, which will create a top-10 gold producer. With strong shareholder support from both companies, this will create the next senior gold producer with average annual production of approx. 1.5m oz. Au over the next 5-years (100% basis). This will do many things for Endeavour, including providing it with a clear anchor asset it has been searching for (i.e., its failed bid for Centamin and its Sukari mine) in Sabodala-Massawa, which is a tier-I asset (360k oz. Au in 2021-22 and 400k oz. Au over the following 4+ years at low AISC). This also provides the company with increased diversification into a 3rd country in West Africa, Senegal. Further, the acquisition also includes a second mine in Burkina Faso, which will increase production by 150k oz. Au over the next 5-years. With clear cornerstone assets, several high-quality Tier-II assets, and an unrivaled exploration and development pipeline, Endeavour is trading at a steep discount relative to its peer group.

Terronera is the future of Endeavour Silver. The project is currently undergoing a feasibility study, the results of which are expected to be published in the 2H 2021. The 2020 PFS envisions a project with throughput of 1600tpd, producing on average, 3m oz. Ag and 33k oz. Au (5.3m oz. AgEq using a 70:1 GSR) for initial capital investment of $99.1m with cash costs and AISC of $0/oz. $2.10/oz. (net of by-products). In the 2017 PFS, which envisioned a two-stage development plan, starting at 1ktpd and expanded to 2ktpd, silver production would be higher. Once 2ktpd is achieved, average silver production would be more than 4m oz. Ag p.a. In other words, hopefully, Endeavour looks at a larger plant size in the FS to achieve higher average annual output or will look to expand throughput capacity shortly after achieving commercial production.

There has been significant exploration success since the 2017 PFS, so this is a possibility while maintaining a 10+ year mine life. Regardless, When Terronera is built, and the company advances Parral, it will transform the company from a high-cost junior silver producer (production <5m Ag oz. p.a.) into a low-cost mid-tier silver producer (5-10m oz. Ag p.a.).

Equinox Gold: The company announced the removal of the community blockade at Los Filos. A staged ramp-up initially started, but certain members of the Carrizalillo resumed the blockade just a few days later. While frustrating, it does mean a resolution is coming. Equinox will likely have this resolved before year-end as this is important for the Los Filos mining operation as Los Filos will see significant growth (from the on-going expansion project) in 2H 2021 combined with lower costs, which will be augmented by Castle Mountain Phase I recently achieving production and the start of construction at Santa Luz, which is on pace to achieve production 2H 2021. 2021 will see a year of growth followed by more substantial growth in 2022. Equinox has the highest 3-5-year production CAGR relative to its peer group, and as the company noted on its q3 earnings conference call, it is actively looking to grow further via M&A.

HighGold Mining: The company announced new assay results from the 2020 exploration program at its Johnson Tract Gold project in Alaska. Results include four drill holes, including additional step-outs to the JT deposit that extend high-grade mineralization down-plunge. Drilling is now concluded for 2020, with a total of 16.42m completed in 33 drill holes. Assay results are still pending for 23 drill holes and will be published over the next few months. Highlights from this release include:

Integra Resources: The company intersects high-grade mineralization 400m north of 2019 results in step-out drilling at War Eagle Mountain. Highlights in this release include:

Two RC drill rigs are actively drilling at the project. An updated MRE is expected to be included in the upcoming Q4 reserve and resource update.

K92 Mining: The company reported a strong Q3 with record throughput following stage 2 plant expansion commissioning. Q3 production of 22.26k AuEq oz. with cash costs and AISC of $695/oz. and $834/oz., generating operating cash flow of $14.8m. Its balance sheet strengthened in Q3, with cash increasing from $6.5m to $41.2m and debt decreasing from $2.1m to $7m. The company remains in a strong position to capitalize on the Phase III expansion; it will turn the company into a cash cow when completed. After completing the Phase III expansion, there will be 40% excess mill capacity, which could increase production upwards of 370-400k AuEq oz if utilized. at low AISC.

New Found Gold: The company announced the results from the hole NFGC-20-26 at the Keats zone as part of the on-going 100k meter diamond drill program at its Queensway project. Highlights include:

New Pacific Metals: The company has identified three new gold and silver-rich polymetallic mineralization zones at its Silverstrike project in Bolivia.  Some highlights include:

Further to its news release dated July 22nd and August 26th, the company received approval from the TSX to complete the spin-out of all existing common shares of Whitehorse Gold to shareholders through a share exchange.

Silvercrest Metals: The company announced a new high-grade discovery at Las Chispas and another new record intercept. The story continues to get better and better, and the feasibility study, to be released in Q1 2021, will likely surprise to the upside. Highlights of the discovery of the Babi Vista Splay vein include:

Victoria Gold: Following a rather disappointing quarter [though not completely unexpected as it is dealing with typical issues once commercial production is achieved], the company posted the final set of 2020 drill holes at Raven [an area where the drill intercept grades have consistently been multiples of the reserve grade]. The exploration campaign has more than tripled the previous known strike length to 750m. This news release contains the final 13 drill holes from the 2020 Raven drill campaign. Highlights include:

Wallbridge Mining: Announced additional results from the on-going 100k meter 2020 drill program on its Fenelon project. This continues to establish the Tabasco-Cayenne shear system's high-grade core with solid gold grades over large widths. The core forms a central portion of the larger shear corridor, which has been drill over a strike length of 800m and a vertical depth of 1k meters. The results in this new release fill in a large gap in the core of the Tabasco-Cayenne zones and provide a strong, wide intersection: 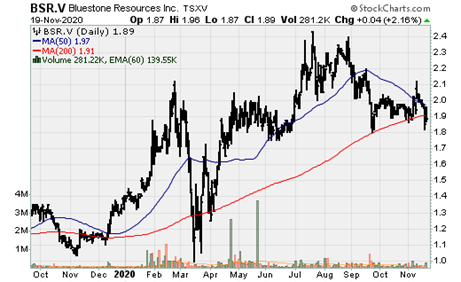