It Turns Out They Really Thought They had a Crystal Ball 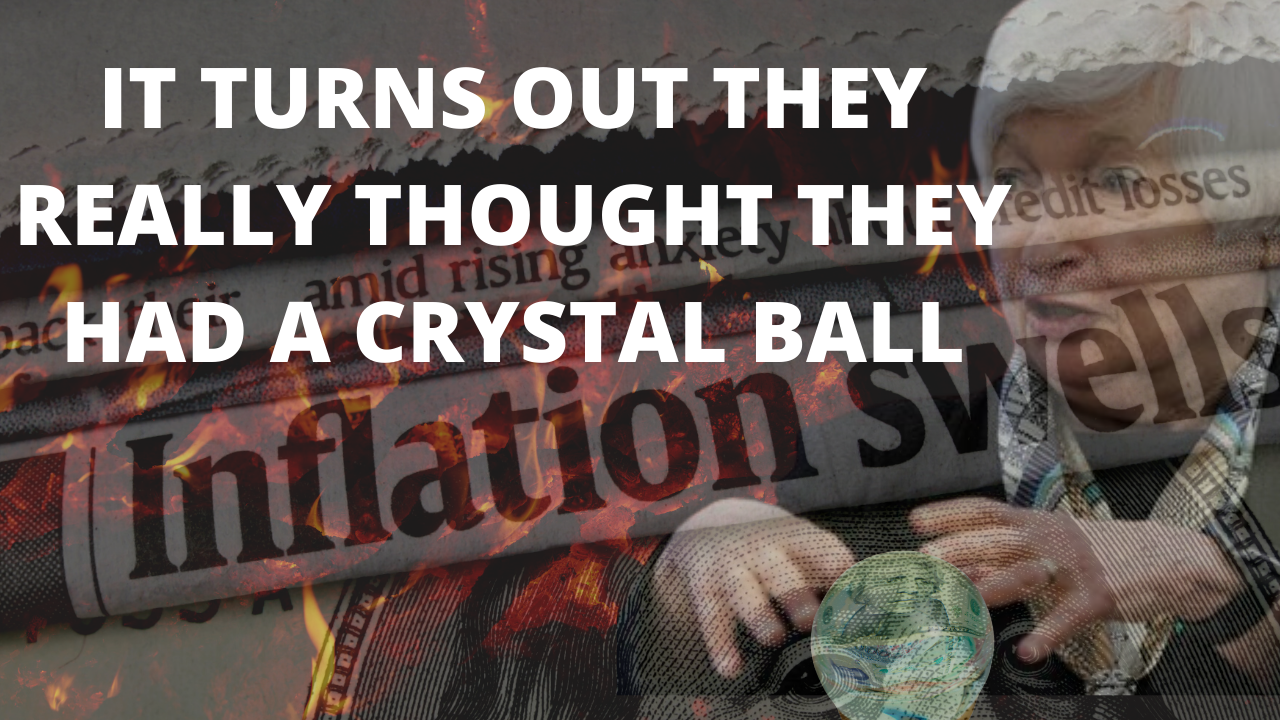 “Many of us smile at old-fashioned fortune-tellers. But when the soothsayers work with computer algorithms rather than tarot cards, we take their predictions seriously and are prepared to pay for them.” Gerd Gigerenzer.

We were reminded of the quote above, in the latest In Gold We Trust Report. An annual offering from Ronald Stoerferle and Mark Valek. It is a 400-page analysis on financial markets and their impact on the gold price.

Of course, every year much of the data and focus looks at the fallout from the actions of central banks and monetary policy.

This year, the release of the report felt particularly prescient given the profile of central bankers at that very moment; Davos was in full swing whilst economic release after release showed that inflation was on a tear (around the world) and central bankers were scrambling to come up with a plan.

Central bankers are panicking because their inability to predict the future has been revealed. Just this week former Fed Chair Janet Yellen was forced on live TV to admit that she had been “wrong then, about the path that inflation would take,”. Referring to comments made last year when she said inflation posed only “a small risk”.

In case you had forgotten, Yellen along with central bankers and policymakers, patronised markets and savers for much of last year by telling us that spikes in inflation were just ‘transitory’ and would soon settle down.

They said supply chains just needed to sort themselves out. Also, the demand and supply would soon find some kind of equilibrium.

Meanwhile, the likes of Wall Street lapped up any stimulus package there was, happy to believe the tale that central bankers had it under control.

Unsurprisingly, the inflationary effects of such stimulus made themselves known well before the end of the year.

So poorly were the central bankers at covering up this charade, that the ECB had to double its inflation forecast in just three months. This was prior to the Russia-Ukraine war.

By chance, it did the trick for the Kiwi economy and so central bankers around the world thought this also might be the answer to their problems. What damage is this institutional groupthink wreaking throughout the global economy now?

Fast forward to today and…well, there’s a fair amount of ‘oops, did I…Did I say that?’ coming from our learned friends. Not only was inflation starting to creep up last year but now we have the Russia-Ukraine war to contend with as well.

In many ways, this has been a convenient excuse for policymakers. So intrinsic are both countries to the energy and food markets that rising inflation can be blamed on Putin.

The chart below shows the global inflation outlook. Given what we already know in terms of the UK, US, and EU inflation, we’d say the chart is conservative to say the least. But, the figures are courtesy of the IMF so perhaps they’re doing a little of their own ‘reassuring’. 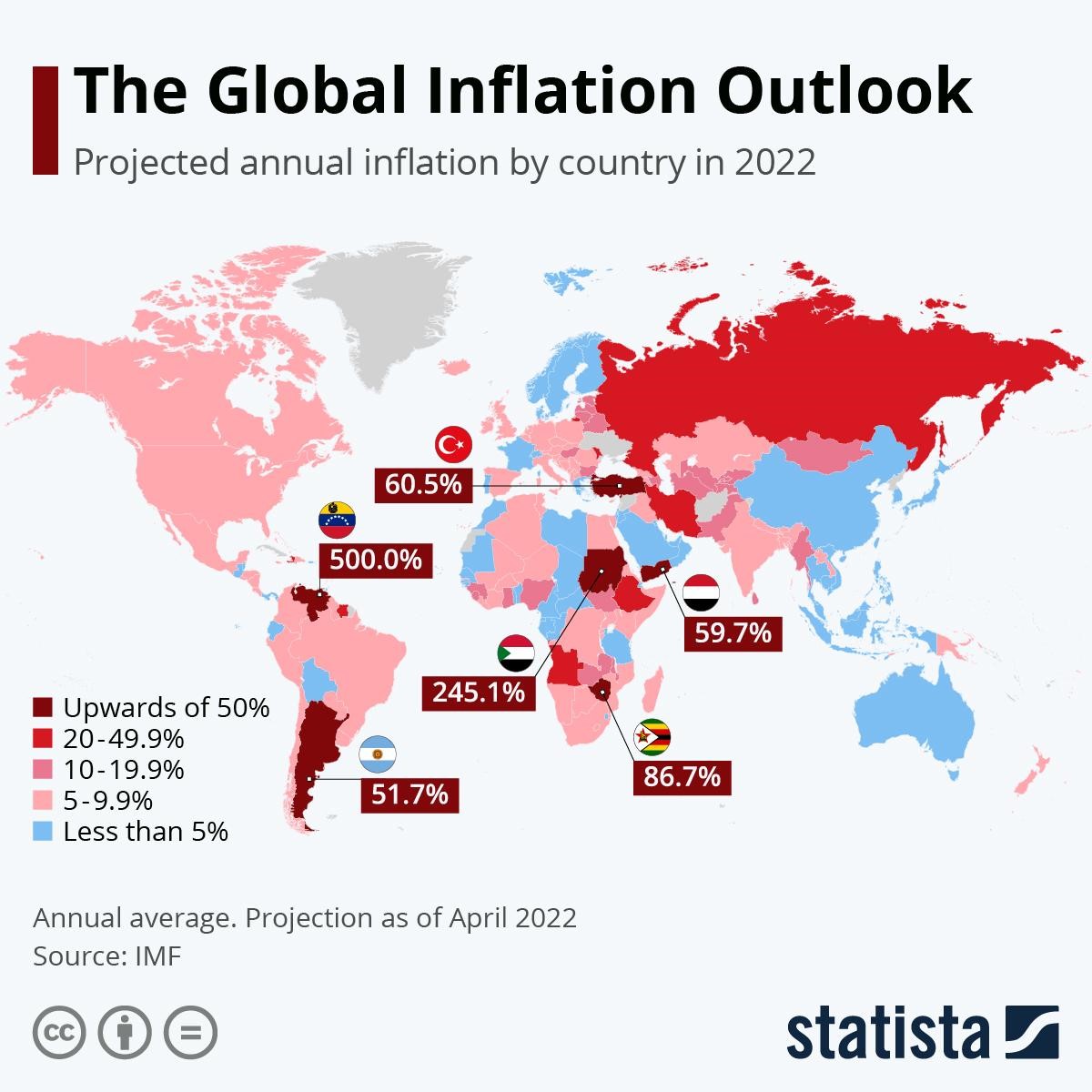 To be fair to the now- US Treasury Secretary, she’s not the only one back-pedaling. U.S. Federal Reserve chair Jerome Powell said earlier this month,

“If you had perfect hindsight, you’d go back…and it probably would have been better for us to have raised rates a little sooner.”  Or how about “We got a lot of things right, we got some things wrong…”

These were the words from Bank of Canada’s Governor Tiff Macklem when he was called up to justify his team’s latest attempt to combat inflation.

Former Bank of England Governor Sir Mervyn King told Sky News that ‘collectively’ central bankers were to blame for this surge in inflation. Moreover, that there has been “a failure of the economics profession”.

So, what’s the big deal here? That they can’t operate from hindsight? That they’re not man or woman enough to admit they messed up? Surely, in the very least the response from all central bankers right now should be; ‘We didn’t realise we couldn’t predict the future.’

What no one has admitted is that stimulus packages to help combat covid and the resulting recession. Also, now the war in Ukraine, have merely been catalysts to what was already a dangerous chemical reaction just waiting for some tinder to be lit.

For decades central bankers have been building a bonfire upon which to burn the global economy.

Twig by twig, stick by stick, with every stimulus package and even with every ‘reassuring’ statement, they have been there, doing the groundwork for all of this to just burn to the ground.

And maybe they did, but what they didn’t do was realise they’re not the only ones with the puppet strings.

Life happens, pandemics happen, wars happen and those really are out of their control.

And now, as we all begin to see through the fact that central bankers can’t predict the future. They refused to acknowledge that QE was a bad idea from day one and that any inflation is basically the theft of wealth, then we ask how can they tackle rising prices without choking the economic recovery? i.e. how can they keep up the facade that there’s nothing to worry about?

So far, the answer seems to be “confidence”. All central bankers and politicians are on a single mission to reassure markets that they have a plan to get this under control.

Of course, this is all about perception, something that next week’s GoldCore TV guest Don Durrett talks about at length.

As he says, it doesn’t really matter what is actually happening right now. Inflation could be at 5, 10, or 15% and this won’t make much difference if markets don’t believe that it’s really a problem.

And this is why we haven’t really seen gold take off. So far central bankers and politicians have been on a charm offensive, trying to keep a lid on things.

But there’s only so long citizens will tolerate excuses about why their pasta shot up by 50% in price, or why they can’t afford to drive to work anymore.

And once that all seeps in, then we will start seeing some major upset, paving the way for gold and silver.