The Many Faces of Gold

Before we look at the Gold charts tonight there are a couple of things I would like to explain to our new members. Long term members have heard what I’m going to explain many times in the past when we start a new impulse move. It sounds pretty basic but very important to understand.

First, you have to know what type of trader you are. There are three timeframes you need to be aware of. If you are a short term trader then you need to focus on the short term minute and daily charts for your buy and sell signals. For me personally I’m an intermediate term trader that looks for the big impulse moves between a consolidation pattern or a reversal pattern, that is why I focus more on the longer term weekly and monthly charts. If one is a long term trader then you don’t care about anything else but the big picture and longer term charts. The most important thing for a long term investor is to know with a high degree of confidence if the stock you are investing in is in a bull or bear market.

The other point I would like to make if one is an intermediate term trader is to know as soon as possible when an impulse move begins and ends. Once you have identified an important intermediate term impulse move has begun there is only one thing you need to do which is psychologically hard for most traders. What that simple and psychologically hard thing to do is, NOTHING.

What happens to most traders during an impulse move is first, they don’t understand what an impulse move actually is and try to trade the small consolidation patterns that help buildout the impulse move. If one is a short term trader that is a different story as we are talking an intermediate term move. Yes, they may capture some small profits from time to time but what happens most of the time is that they will get left behind always looking for a way to get their positions back as the stock runs higher.

There is an old Wall Street adage that I completely disagree with. It says, you can’t go broke taking a profit. That is partly true if you take a profit on every trade you make but every trade you take won’t be profitable. In a strong impulse move you can take a small profit but then you have to get back in at some point which I can tell you from first hand experience is a very hard thing to do when the trend is very strong. What usually happens is that you will pay up to get your shares back and lose the difference between where you sold and where you got back in at, rinse and repeat.

The time to trade is during the formation of a consolidation pattern and try to catch the reversal points that make up the internal structure of say, a triangle. An impulse move is an entirely different game altogether.

Everyone has to figure out what type of trader they are and to understand how the market moves. Knowing that can help you make more money than you lose. It sounds simple enough but hard to do in real time.

Tonight I would like to show you the many different faces of Gold from the intermediate to the longer term timeframes. We already know that big consolidation patterns are usually made up with small patterns especially in regards to H&S patterns. This first chart is a combo chart for Gold with the top chart being a bar chart and the bottom one being a line chart.

Lets focus on the impulse move between the two H&S patterns that lasted almost two years. Looking at the nearly two year impulse move looks pretty easy in hindsight but I can assure you it is an entirely different game in real life. Put yourself in at any point from the lower H&S bottom to the 2020 high where the impulse move ended. How would you have reacted during those small consolation patterns especially the 2020 pandemic crash low?

What we do know from a Chartology perspective is that first, there was a pretty big H&S bottom which strongly suggested a big move to follow. The first minor impulse move formed the blue bull flag which confirmed the bigger impulse move was underway. The 2020 crash is not typical in a strong impulse move but Gold did find support on the 65 week ema which led to the next small impulse move up. After a couple of months of sideways chopping action formed the last consolation pattern in the big impulse move which was the blue triangle. Normally during a big impulse move you will generally see anywhere from two to four smaller consolidation patterns form. 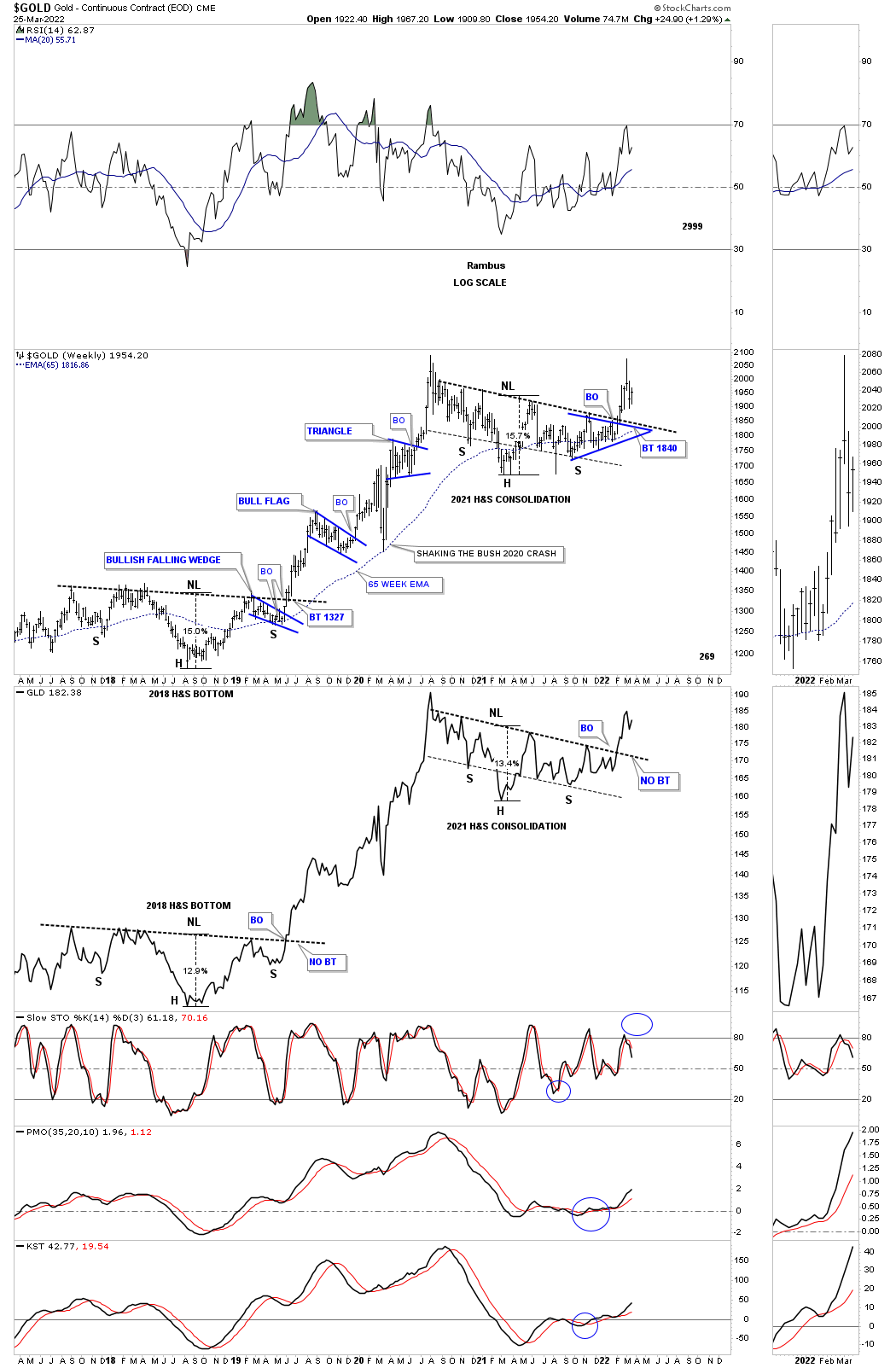 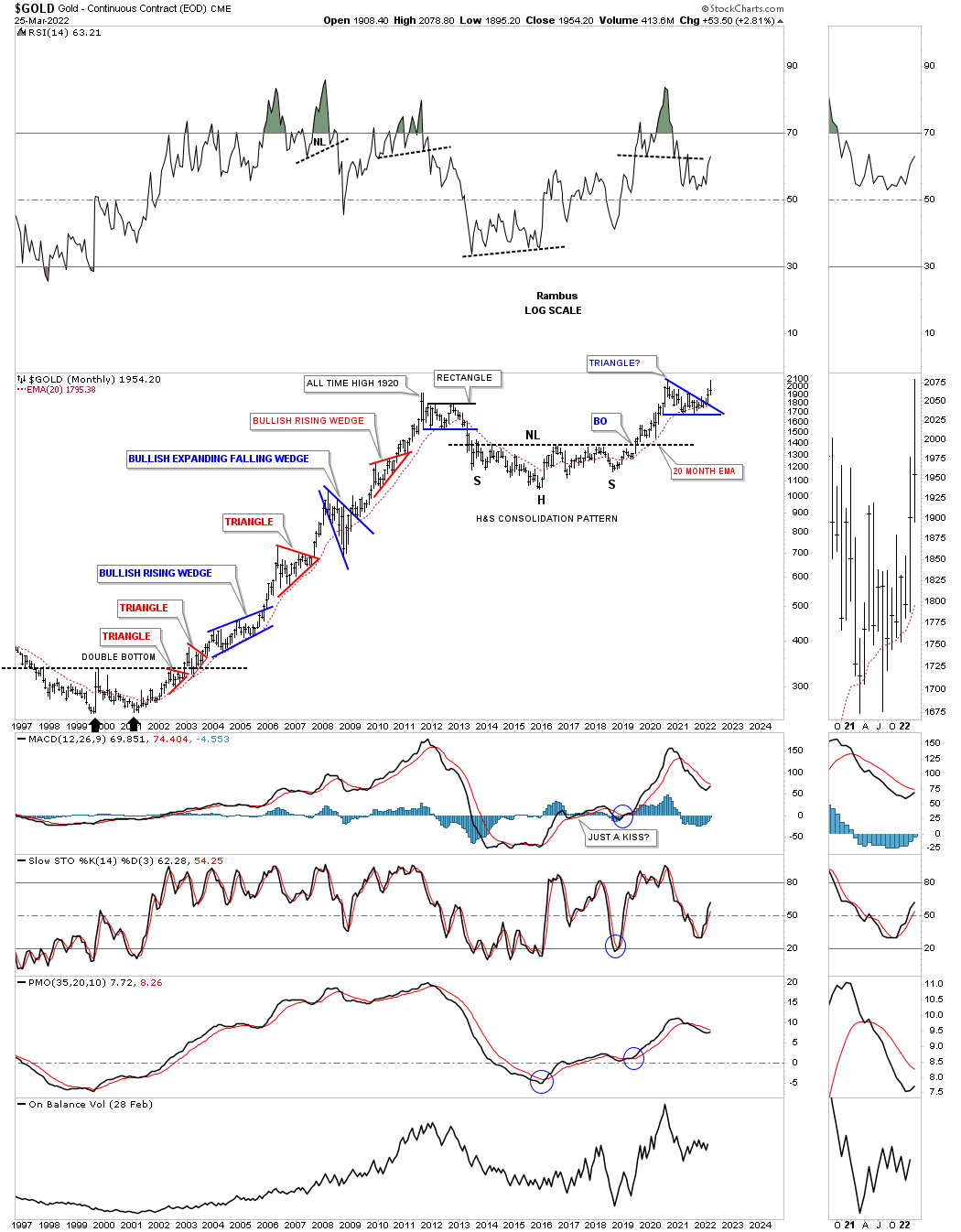 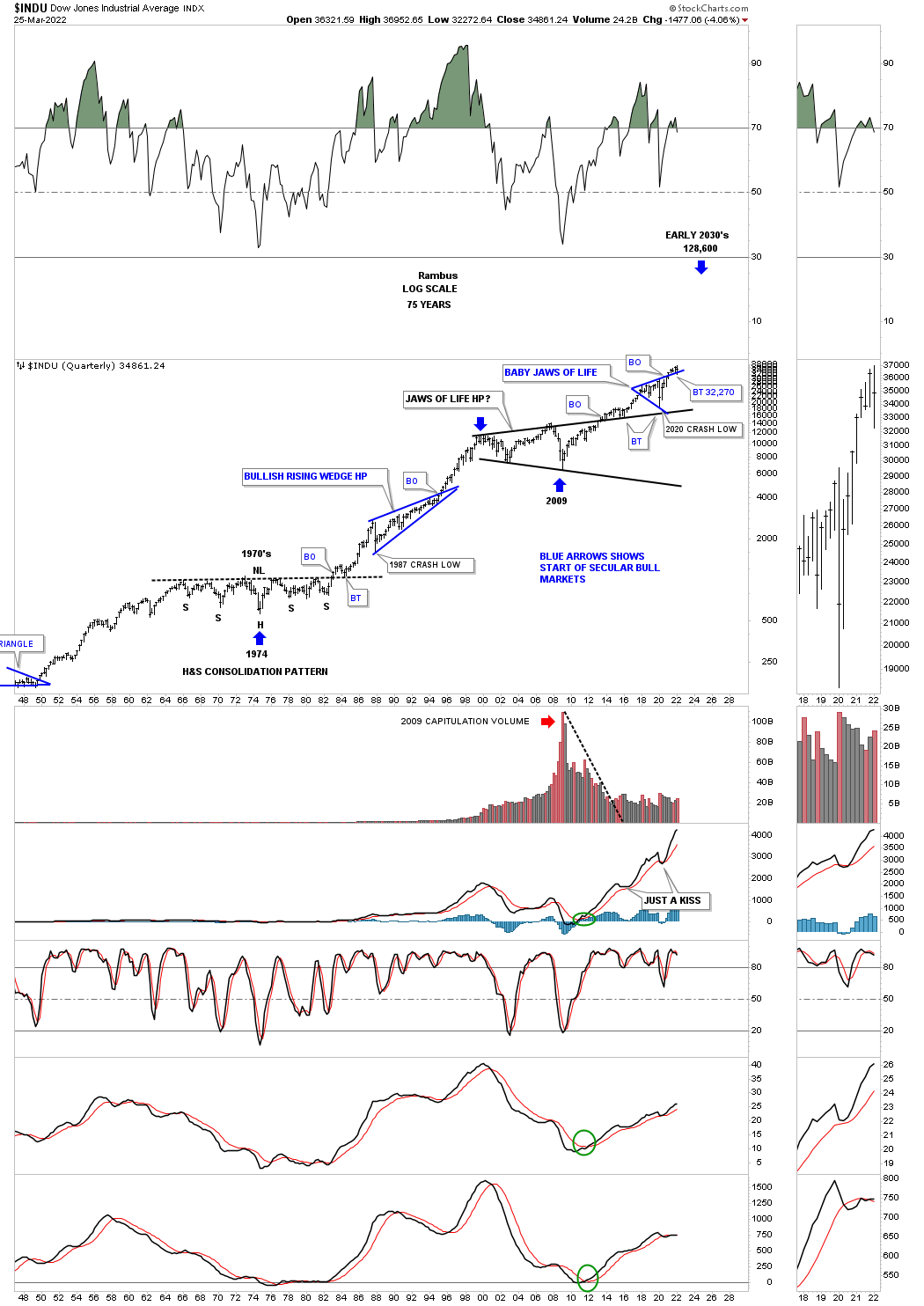 There is no way to know 100% for sure when the time component will be completed but for now it is a good guide we can use. There will be other things we will be following that will help us in signaling the end of the secular bull market but at this point we should have at least four more years at a minimum ahead of us. 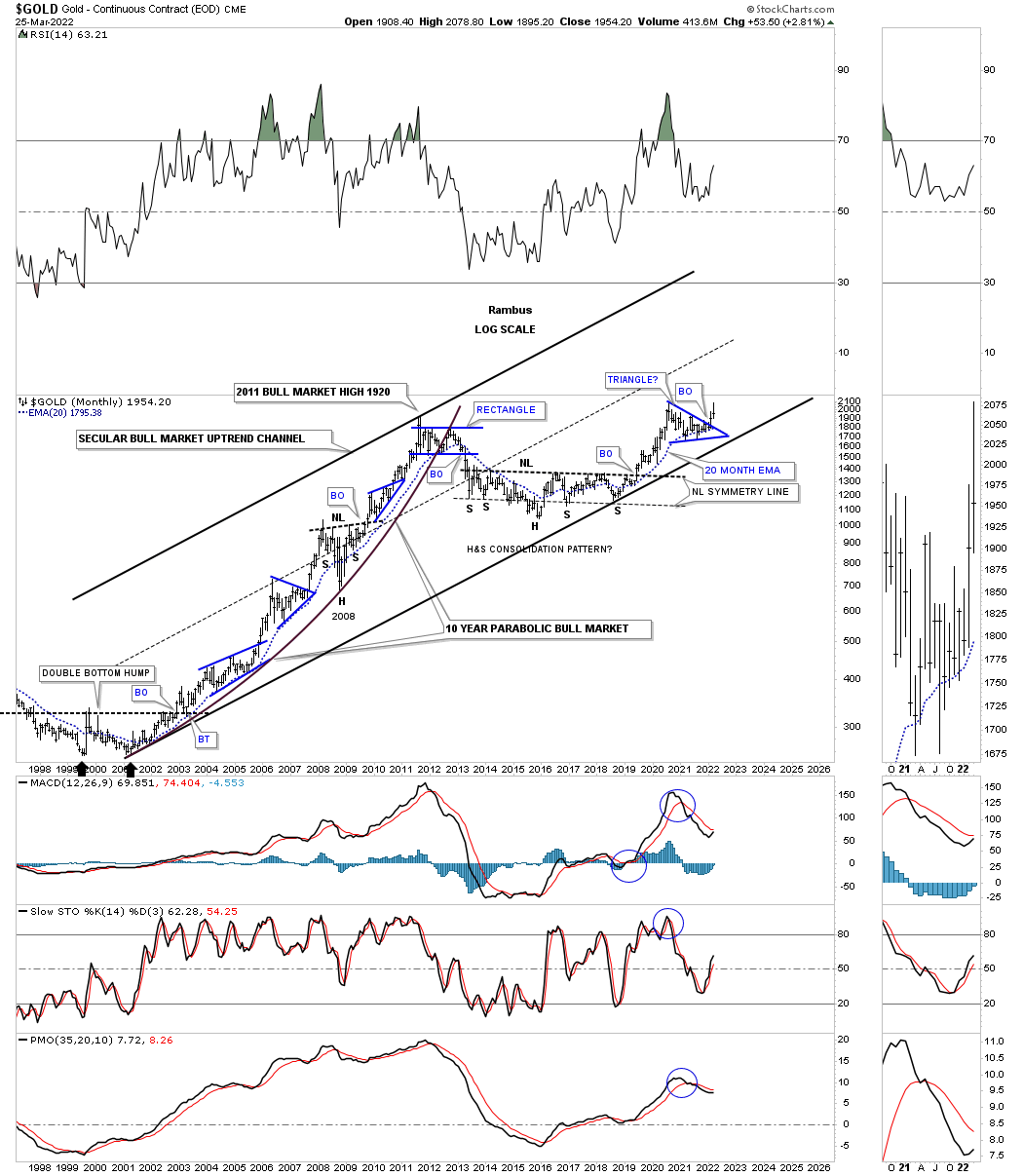 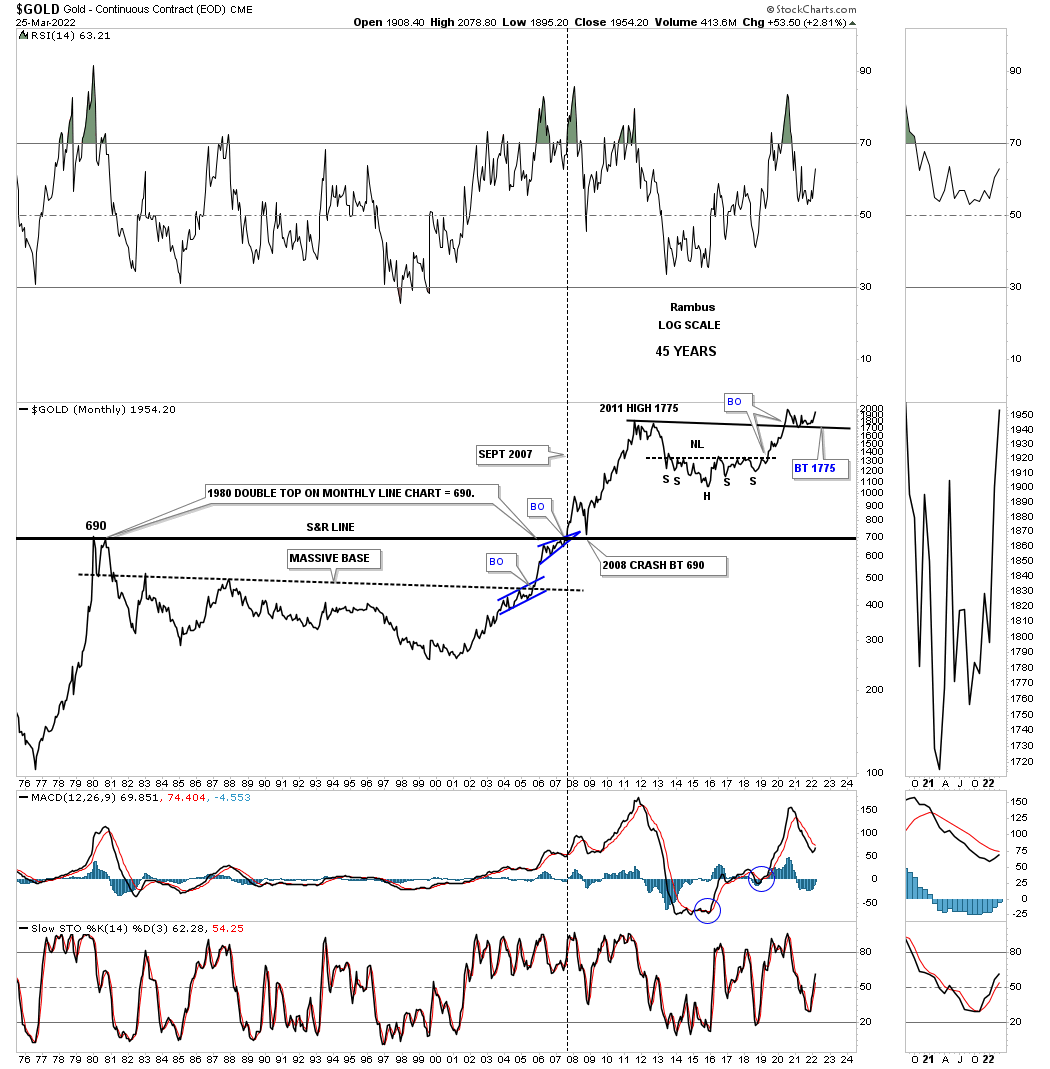 This face for Gold shows its massive H&S consolidation pattern which I’m viewing as a halfway pattern in the secular bull market that began at the 2000 low. You can measure the distance between the head and the neckline to get a minimum price objective for Gold which again is a minimum. 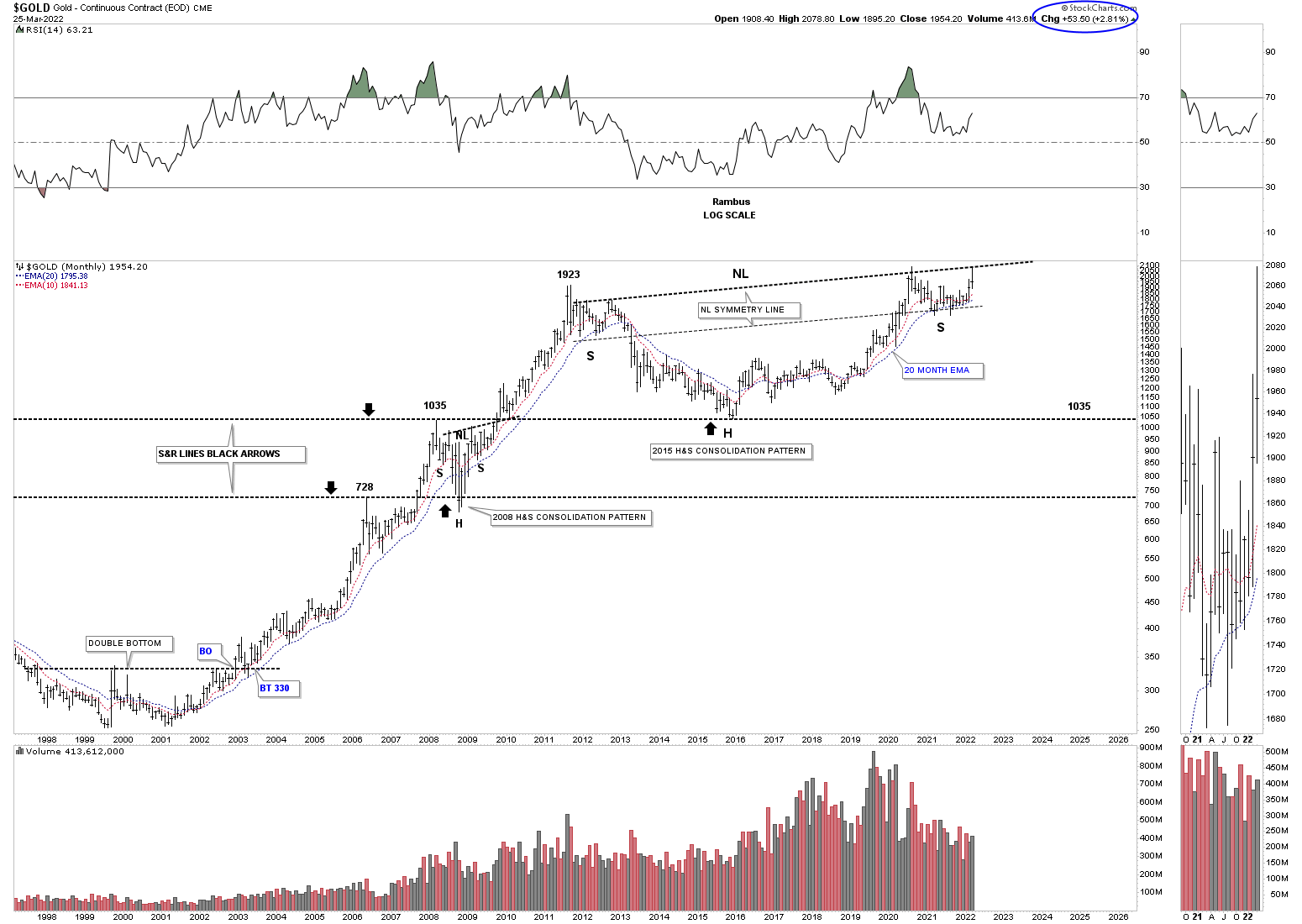 This next chart is a long term quarterly bar chart which is beginning to look very bullish. By that I mean look at the current quarterly bar and how the price action has held support on the backtest to the 2011 high. From my perspective all the work has been done with the backtesting process and now it is time for the real impulse move to take hold which by the end of the next quarter I expect to see the next quarterly bar much higher than the first quarterly bar for 2022. We won’t know for sure until the 2nd quarter is finished but the setup looks extremely bullish especially if we see a new all time high being made in the next three months. 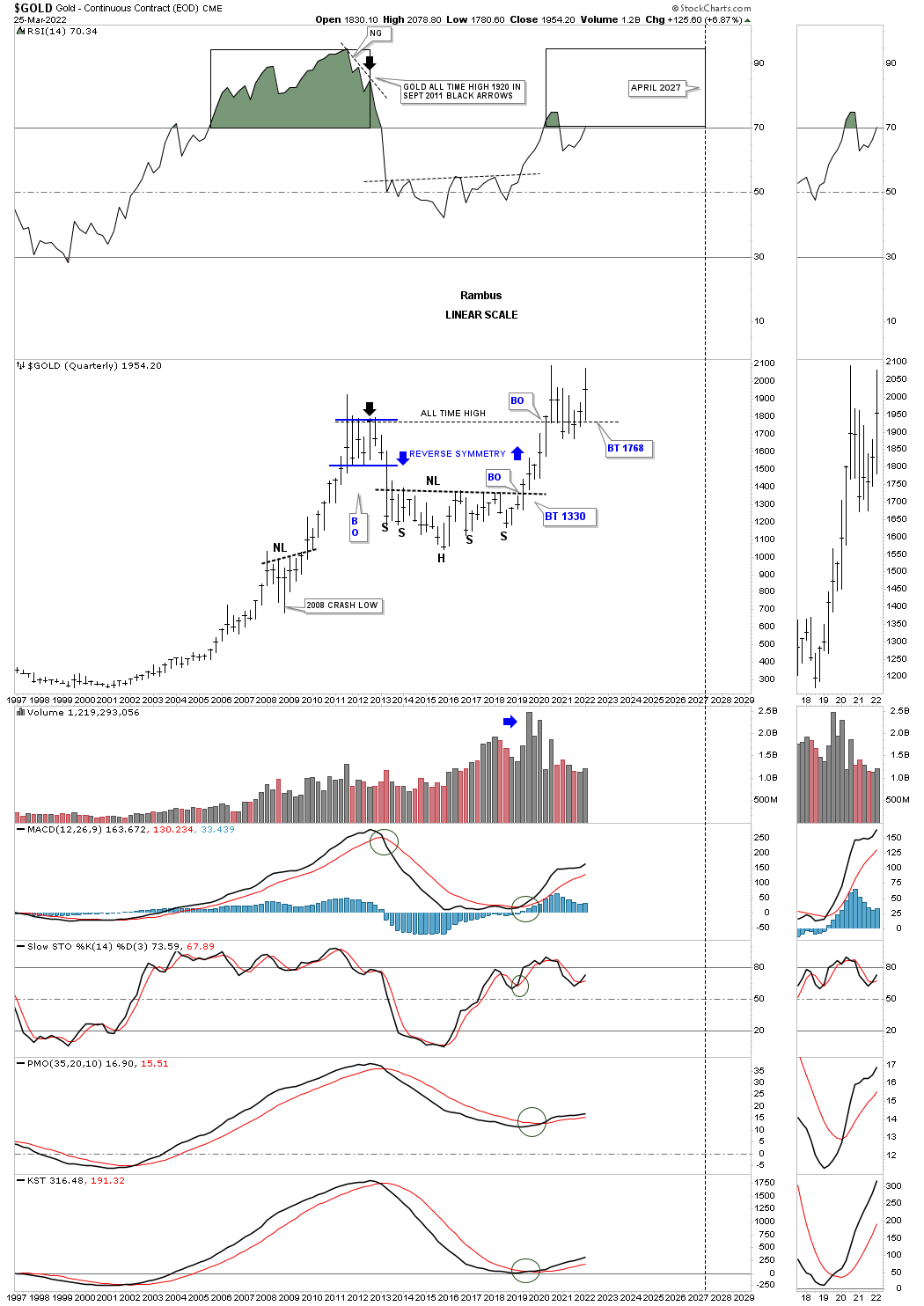 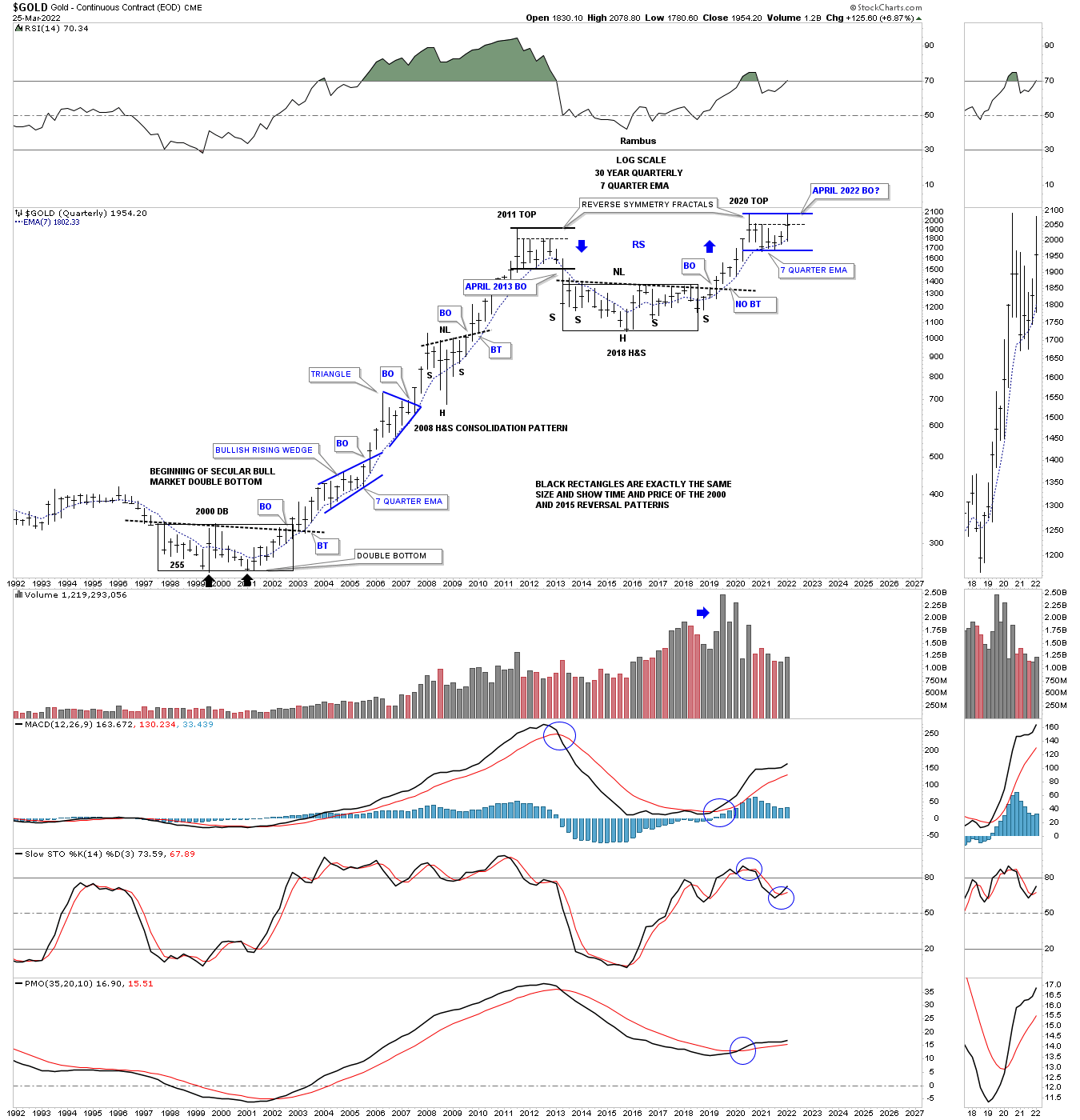 Below is a quarterly line chart which really puts things in perspective for me. Again, in just four more days of trading Gold will begin its next quarterly bar of trading. On a quarterly closing price Gold is trading at a new all time high. Remember a line chart will often show you a breakout before a bar chart does.

Another important aspect of this quarterly line chart is that it shows you how smooth the price action was during the bull market years from 2000 to 2011. The only real hook lower was the 2008 crash low and when the 2011 top was completed.  Other than that Gold made a new higher high except for a few minor blips by the end of each quarter. Note the price action starting at the right shoulder low and how smooth it looks except for the backtest to the 2011 high.

If the Chartology plays out as expected the 2nd quarter of 2022 should be something to behold for the PM complex and for those that can ride the bull and not get bucked off. We could very well be in for the ride of a lifetime. All the best…Rambus 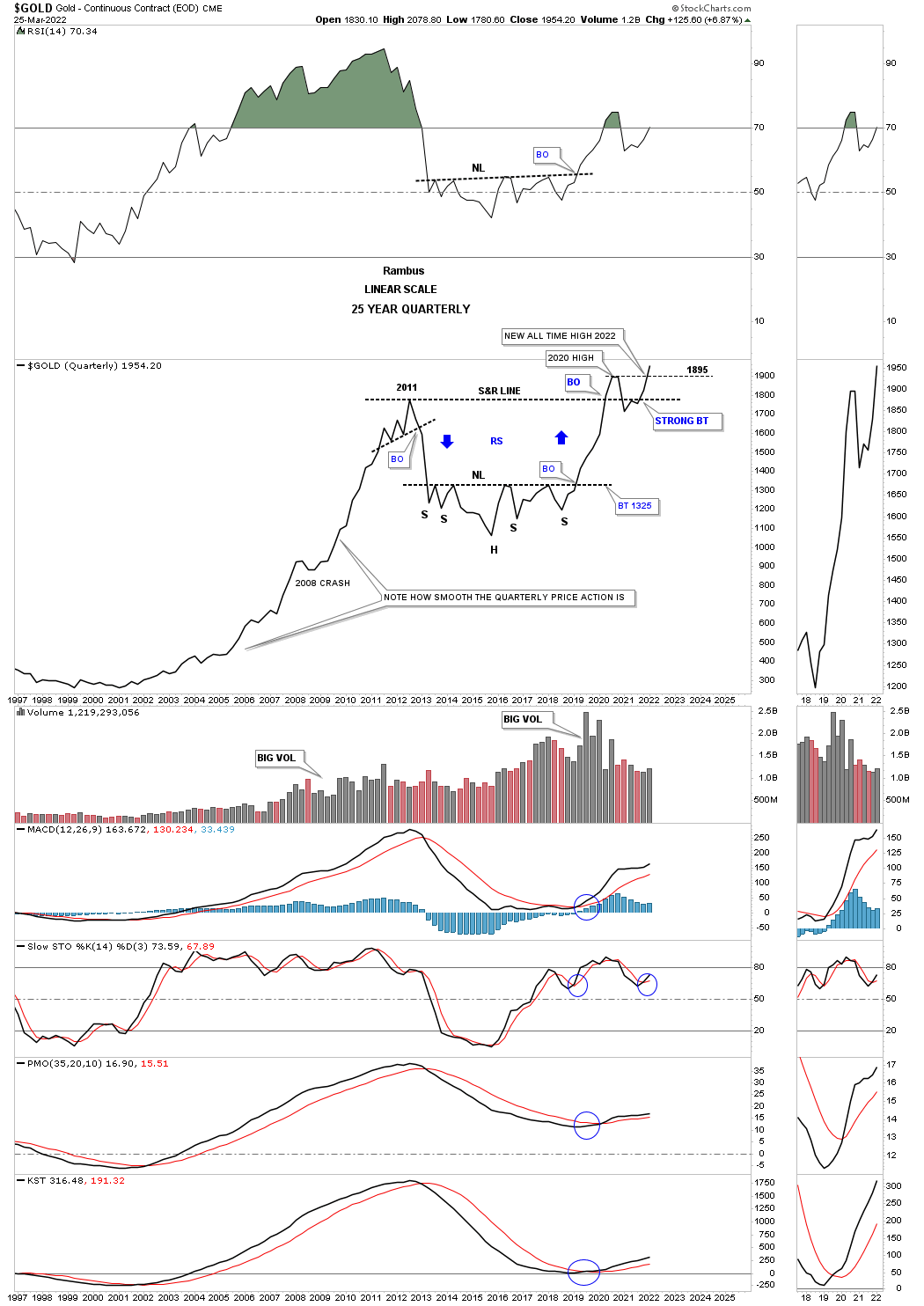 Can you afford to navigate this Gold bull without Rambus ?