November 21, 2022 The Housing Market Crash Is Getting Worse
November 09, 2022 Is A Gold (And Silver) Rush About To Occur?
October 25, 2022 The Housing Market Appears To Be Melting Down Rapidly
October 04, 2022 Perhaps This Is Why Gold and Silver Have Begun to Outperform the Stock Market.
September 27, 2022 Paper vs Physical Gold - What Happens Next?

Market Indicators That Suggest A Precious Metals Rally May Be Imminent

NOTE:  The following is an article I wrote for Kinesis Money.

In my opinion, the precious metals sector is on the same path that it went down (and then up) in the summer/autumn of 2008. Gold and silver are very undervalued relative to the financial, economic and geopolitical risks that have engulfed the world. And the mining stocks are extraordinarily undervalued relative to all financial assets (stocks, bonds, housing – yes housing is financial because home values are derived mortgage financing).  If you are looking for mining stock ideas that should outperform the sector, I publish the Mining Stock Journal, which now offers Stripe as a payment alternative to Paypal.

It’s always best to approach any investment with a long-term view. While physical gold and silver are first and foremost wealth preservation assets, they can also be used as rate-of-return assets after periods of time when they have become “oversold” relative to other financial assets, such as the stock market.

In addition to the gold/silver ratio, some interesting, lesser-followed market indicators suggest the possibility that the precious metals sector may be forming an investable bottom. 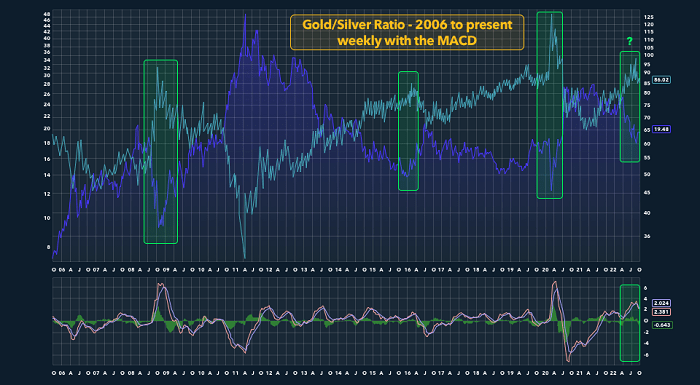 The chart above shows the gold/silver ratio (GSR) from late 2006 to the present on a weekly basis. Periods when the GSR has risen above 80 (as indicated by the green boxes) are followed by a sharp decline in the GSR and a rally in the precious metals sector.

Currently, the GSR has rolled over from reaching its third highest level since 2008 and by far the highest level since August 2020, when the current down-cycle in the precious metals sector began. In addition, the MACD – or the moving average convergence divergence – hits its third most overbought reading in the time period shown in the chart. It has rolled over and is pointing to the possibility of a downturn in the GSR.

Read the rest of this analysis here: Kinesis Money