Tesla Was Added To The SPX – Now What?

Tesla is emblematic of the fraud and deception that has permeated every nook and cranny of the United States’ economic and political system. It is the poster-child for the biggest stock bubble in history.

Well, the SPX index inclusion event is finally over. TSLA shares were quite volatile on Friday. TSLA was up over $30 early in the trading session Friday. In the last hour of trading, TSLA swung from from up $20 to down $20 and ended up closing up $39, as roughly 95 million shares crossed the tape at the close, likely index funds finalizing their rebalancing. The stock closed down $19 in the after-hours trading on Friday.

While it’s impossible to know for sure, my bet is that TSLA will start dropping precipitously in price sometime over the next 3-4 weeks.  As of mid-day Tuesday (Dec 21) the shares are down 8.6% from Friday’s close.

A comparison to Yahoo is appropriate. Yahoo screamed from a market cap of $850 million by the end of its first day as public company in 1996 to $127 billion within a month after it was added to the SPX index in December 1999. It was trading at 211x trailing revenue at its peak market cap. Competition flooded Yahoo’s internet space, in 2000 and its sales dropped 36% over the next year. Over the next 1 3/4 years, Yahoo’s stock fell 98%. In the 1H 2021 there will be at least 24 new EV models rolling out in China. This will have a highly adverse effect on Tesla’s revenues.

Recall that a couple if weeks ago Consumer Reports rated Tesla’s Model Y as well below average for reliability. Edmunds issued a report in which it rated Ford’s Mach-E “the best in the luxury EV class.” It also said the Mach-E is far superior in ride quality to the Model Y, saying that  “in our experience the Model Y Performance rides harsh, unacceptably so – the Mach-E’s ability to handle pavement is vastly superior.”  In other words, the Model Y is a piece of shit, operationally and aesthetically. 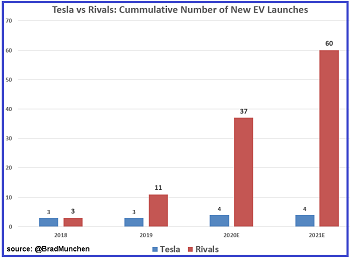 And thus the real competition stage in the Tesla saga begins. This is when we get to see worldwide what happens to Tesla’s market share when the big OEM’s muscle into the EV space. We’ve seen a preview of this in the EU, especially Norway and Netherlands, which are two of the largest and most developed EV markets globally.

Tesla had little to no competition between 2010 and 2019. As competition begins to invade the market, its accompanied by price cuts and shrinking margins.  With little competition through 2019, Tesla has been unable to generate profits from its sale of automobiles (the only source of income has been the sale of regulatory credits).  What will Telsa’s income statement look like in 2021 when there will be 50+ new EV models launched worldwide?

TSLA’s bubble may not pop immediately, but I have a hard time imagining that TSLA’s shares will not be significantly lower six months from now.