The Transition to Net Zero was Planned with Zero Brain Cells

Energy is our primary resource. Energy facilitates all physical work done. It is the foundation for all farming, manufacturing, and distribution. Energy allows human populations to live in modern cities.

The industrial revolution marked the transition from an agricultural and handcrafted economy to a specialized and machine-based economy. Currently, a new shift is underway, which is a transition from fossil fuels to renewables.

In May of 2021, the IEA published its "flagship report" titled Net Zero by 2025, A Roadmap for the Global Energy Sector. This 24-page executive summary reads as an oversimplified wish list. The report fails the most fundamental scientific method and due diligence. (emphasis added in bold type)

"Beyond projects already committed as of 2021, there are no new oil and gas fields approved for development in our pathway, and no new coal mines or mine extensions are required. The unwavering policy focus on climate change in the net zero pathway results in a sharp decline in fossil fuel demand, meaning that the focus for oil and gas producers switches entirely to output – and emissions reductions – from the operation of existing assets. Unabated coal demand declines by 98% to just less than 1% of total energy use in 2050."

Here is what the world looks like today when ranking energy sources. 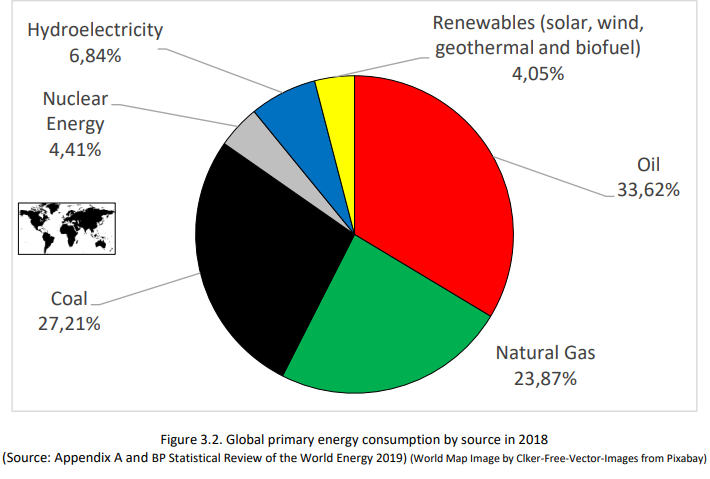 This report points out the enormous challenges of phasing out fossil fuels. When most people think about replacing fossil fuels with "sustainable" sources, the discussion immediately pivots to electric vehicles replacing internal combustion engines. We will see how this is a trap precisely because electric cars require components like Lithium, aluminum, Cobalt, Graphite, Silver and Nickel. These metals require a monstrous mining effort and diesel is the chief input to the mining process. Likewise, electric engines need to be charged by power plants thus generating electricity is linked mainly to fossil fuels.

There are many ways to analyze this problem. One way is to work the problem backwards. So you start with looking at the world through a lens without fossil fuels and the amount of electricity required to do these five things.

When we speak about energy, the best way to break down energy use is to think of fuel for our cars, trucks, railroads, jets and ships. The next category is fuel for our homes (heating and cooling.) Next is energy for business and manufacturing. We also need to pay more attention to two other significant categories. One is how much power is used by the military. This data is hard to obtain because it hides behind a veil of secrecy. The most overlooked category is all the energy required to harvest energy.

Think of it this way: if all the excellent coal was sitting on the surface, workers could literally walk around the ground and gather coal, and relatively little energy would be required. But, as populations have grown and resources have been depleted, it takes more and more energy to make energy. This phenomenon is known as "Energy Invested on Energy Returned."

Throughout this report, I will list European data because the more extensive studies have been funded by governments in Sweden, Norway, and Germany.

In 2017 emissions from transport are approximately 25% of the total European CO2 emissions (European Commission 2020 Strategic Research Agenda for batteries). The fossil-fueled electrical power generation fleet of power stations contributed to 23%. By enabling the electrification of transport and the use of renewables as a reliable energy source, the use of battery technology has the potential to reduce global emissions by roughly 30% by 2030.

In 2019 there were 7.2 million electric cars registered in the global vehicle fleet. However, this represented only 2.6% of the total passenger car market share.

This was also a 6% growth from the previous year (IEA 2020, Global EV Outlook 2020). The EV industry is having trouble with mass adoption, so European and American politicians have responded with tax incentives. The problem surfaces and is best described by analysts like Doug Casey, "When these fail, the next step will be writing laws forcing adoption."

Casey continues, "Almost everyone favors internal combustion engines in a free market for reasons such as cost, horsepower and range. Next time you are in your car, notice how many gasoline stations there are compared to charging stations. Since the free market favors internal combustion engines over EVs, globalists and politicians must resort to legislation and regulations to prop up EV market share."

To this end, the sale of ICE vehicles and/or petroleum products will be taxed so high that they become unaffordable compared to alternative EV technology. Moreover, Europe is currently strengthening its CO2 emissions standards, a "dirty trick" to force people towards EV adoption.

France adopted the phase-out of internal combustion vehicles to further incentivize the market by the 2040s. At the same time, another 17 countries announced similar intentions targeting a 2050 timeframe.

The scope of needed batteries exceeds just EV vehicles. They will also be required to manufacture stationary energy storage battery banks. In 2017, the global cumulative installed capacity of electrochemical energy system storage was at 3.5 GWh in scope. This capacity is expected to rapidly increase to approximately 400 GWh by 2030 and to 1300 GWh by 2040.

Another overlooked category is how much fossil fuels are used for all the railroad and shipping lanes. If technologically possible, batteries will be used in maritime shipping and aviation applications. However, only 250 naval vessels are currently operating with EV battery propulsion systems and only 150 more are being commissioned.

The globalists believe that the energy tooth fairy will deliver the required energy and are coaching a game without a playbook. It's utter nonsense that the first hybrid cruise ship was only recently introduced in 2019. This hybrid cruise ship by Color Line allows for entire electric operation in and out of the ports.

Using a cruise ship was mostly for PR purposes. This ship is more like a tax write-off museum exhibit and less like an efficient sea vessel.

It is also an objective to have all rail transport fully electrified.

Batteries for jets have fundamental limitations. The batteries weigh too much relative to the power they yield. Small electric aircraft have made some progress but tech limitations mean long flights are still decades away. Current technology allows small aircraft to travel small distances. 4 passengers go only 100 km.

This is another absurd data point. Most air trips exceed 1000 km.

No one is talking about India.

The three main consumer markets are the United States, European Union and China, accounting for 54.99% of the global market. India has 1.4 billion people compared to the 332 million in the USA. Over the past few decades, US corporatists have embraced labor arbitrage and outsourced to India. The good news is that this job development in India has elevated people out of misery into an enormous middle class. But let's look at how this impacts the existing "Energy Cliff."

Currently, only 5% of the homes in India have air conditioning and India is a scorching hot country. As this vast population starts buying appliances and air conditioning, the energy drain will be monstrous in scope. Yet, you will never read anyone discussing this challenge.

LOOK HOW MUCH METAL WE DON'T HAVE OR COULD NEVER GET.

This is an open and shut case. Look below at how many years of mining it would take to replace fossil fuels with ESG standards. Phasing out fossil fuels can not happen using existing technology.

So, just how much metal will be needed to phase out fossil fuels?

For Copper, 6,700 million tonnes are needed. In 2019, 20.4 million tonnes of Copper were produced. So it would take 328 years (using 2019 Copper production numbers as a baseline) to reach the required Copper amount needed to phase out fossil fuels.

For Nickel, 1,352 million tonnes are needed. In 2019, 2.61 million tonnes of Nickel were produced. So it would take 518 years (using 2019 Nickel production numbers as a baseline) to reach the required Nickel amount needed to phase out fossil fuels.

For Lithium, 1,386 million tonnes are needed. In 2019, 0.086 million tonnes of Lithium were produced. So it would take 16,121 years (using 2019 Lithium production numbers as a baseline) to reach the required Lithium amount needed to phase out fossil fuels.

For Cobalt, 319 million tonnes are needed. In 2019, 0.144 million tonnes of Cobalt were produced. So it would take 2,213 years (using 2019 Cobalt production numbers as a baseline) to reach the required Cobalt amount needed to phase out fossil fuels.

For Graphite, 13,217 million tonnes are needed. In 2019, 1.1 million tonnes of Graphite were produced. So it would take 12,015 years (using 2019 Graphite production numbers as a baseline) to reach the required Graphite amount needed to phase out fossil fuels.

For Silver, 3.2 million tonnes are needed. In 2019, 0.0265 million tonnes of Silver were produced. So it would take 121 years (using 2019 Silver production numbers as a baseline) to reach the required Silver amount needed to phase out fossil fuels.

What are they Smoking?

Many politicians smoking Hopium will say "Just Explore More," but we must remember the following:

- The time taken for a discovery to become a mine is over 20 years.