What If Crude Has Topped? 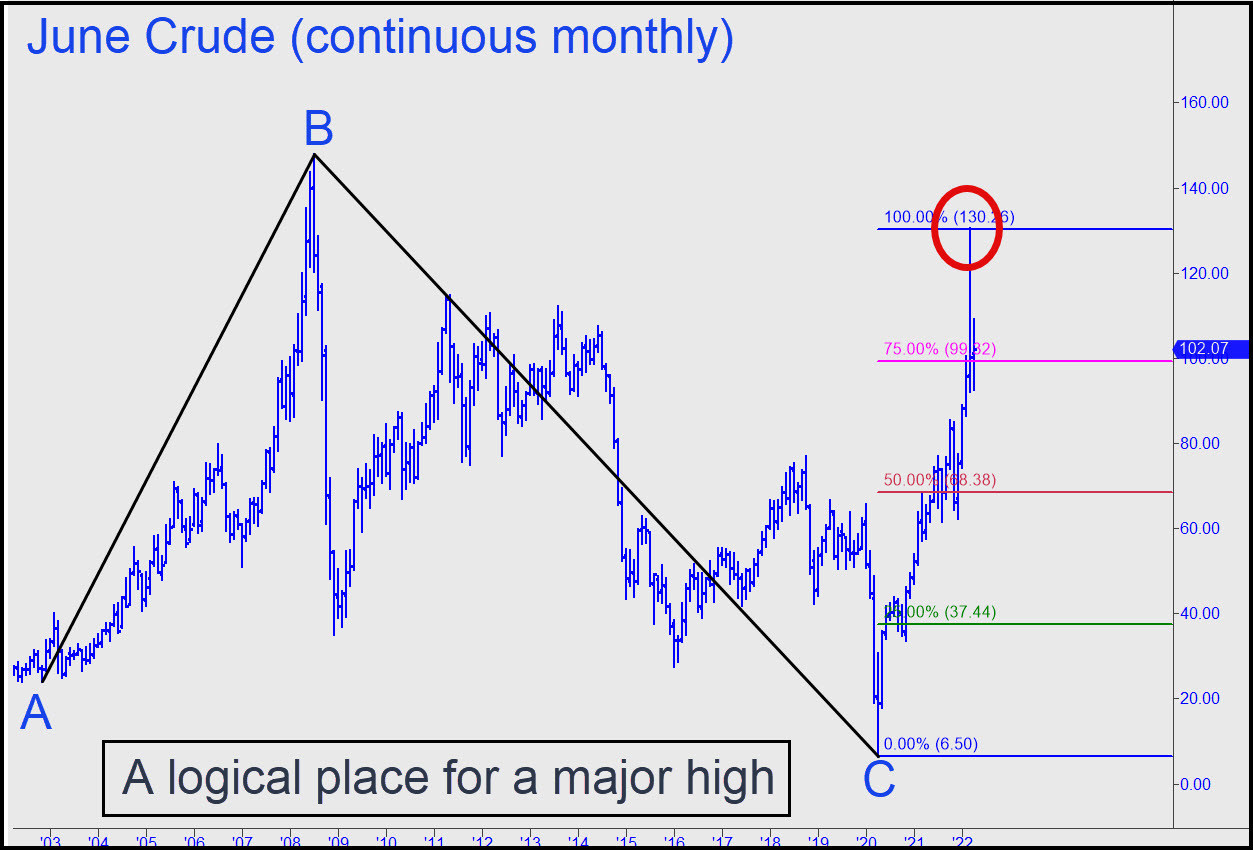 If you're a permabear, it might be refreshing to view Friday's thousand-point Dow avalanche as the start of a wholesome new trend. My gut feeling, however, is that the plunge will reverse before midweek, ideally at Hidden Pivot targets featured in the latest list of 'touts' on the Rick's Picks home page. I'll keep an open mind about this if the targets get smashed, but I'm not convinced the stock market has begun the punitive reset it has needed so badly for years.

Arguably more interesting and consequential is the steep ascent of yields on the 10-Year Note to within inches of a 3.24% target that I've been drum-rolling for months. What will happen when we get there?  My gut feeling is that rates will level off for at least a few months, then head lower for a long, long time as the U.S. and global economies slide into a deflationary bog. Lower rates unfortunately will bring no relief for debtors, however, since the value of assets that they've hocked up to their eyeballs as collateral will be falling as well.

From a technical standpoint, the 3.24% target looks too clear and compelling not to halt the rise in long-term rates at least temporarily. From a fundamental standpoint, the reason I doubt the rally will blow past 3.24% is that at that level the total burden of all debts will be sufficient to snuff inflation of every sort, turning the real estate bubble, for one, into a black hole of deflation. This will happen irrespective of what the wizards at the central bank intend or expect. Some are saying the Fed wants the stock market lower. Although that sounds plausible, we shouldn't trust that they know how to do this without collapsing an already shaky global economy. The equally clueless economists at Goldman Sachs recently quoted recession odds of 15% in the next 12 months and 35% within the next 24 months. I'll take the odds, since I trust the assessment of paid-up subscriber Matt Barnes, who says the recession has already begun.  Matt is in the shipping-pallet business, so he would know.

The Bet Has Changed

If he's right, then the crude oil chart displayed above tells a logical story. I myself had been expecting another strong bull leg when the ostensible consolidation begun in early March ends. This scenario has never seemed quite right, however, since the global economy appears to be cratering.  A key marker in steep decline is China's manufacturing sector, which drives world oil prices at the margin. The chart would seem to agree, suggesting that the feverish peak in rates that occurred in early March will stand as a major top. For the June contract, the high was $121.17 per barrel. The corresponding high for the continuous monthly chart above was 130.26, just 12 cents from a compelling rally target derived from the 'reverse' ABC pattern shown. Although it's possible the futures will exceed the high after correcting for a while, this no longer looks like and odds-on bet.  The implication is that a severe global economic slowdown is about to overwhelm the offset of tight supplies that have pushed prices higher.