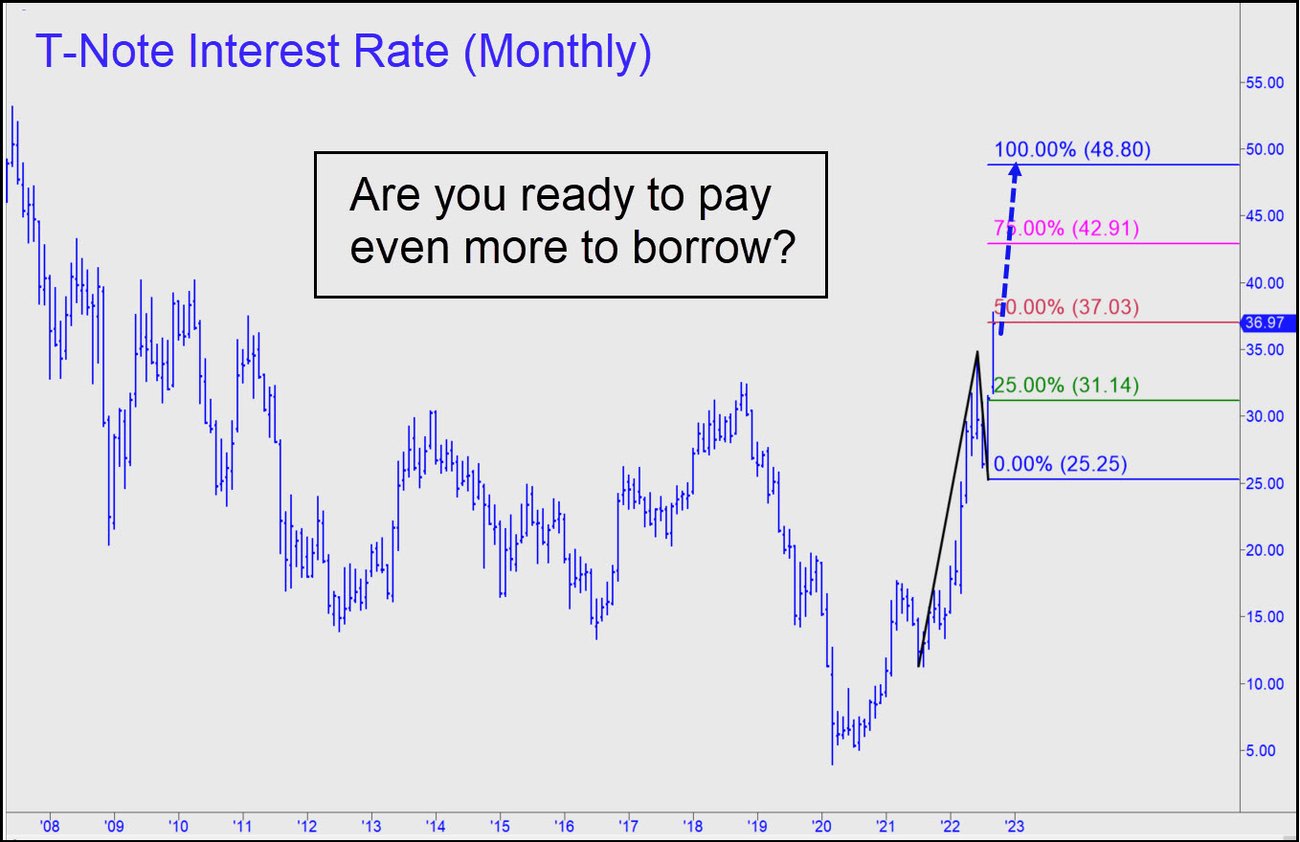 A pen-pal from the world of very high-tech inventions is a self-described 'collapsitarian'. He wrote me recently to say he enjoys these weekly screeds for their relentlessly glum insightfulness. (For your information, he is 50% in cash, 25% in gold, and 25% short stocks.) Longtime readers will know that I seldom shout 'The Sky Is Falling!!' in a headline. Rather, the not-so-great news is dispensed matter-of-factly in the final sentence or two, where you are admonished to reef the sails, batten the hatches and retreat below. And if the vessel should pitchpole, leaving one badly shaken and crawling on the galley ceiling, what then?  Prepare for the 100-foot rogue wave yet to hit, is about all I can advise.

That's what I see coming, "probably" sooner rather than later. Disaster seems all too likely to arrive in the form of an unscheduled bank holiday that touches off a fatal spasm of debt deflation. I often reiterate in that final paragraph, matter-of-factly, that deflation is inevitable because, well, because it is. I've been writing about this-- some would say bloviating -- for long enough to have annoyed more than a few readers. One was upset about a particularly gloomy column I'd written for the San Francisco Examiner. He told me he managed $250 million and asked what qualified me to predict such a scary future. I responded by critiquing some minor errors of grammar and punctuation in his email. His next note put me in my place. Turns out the $250 million was his personal money, and English was just one of six languages he, a cosmopolitan Iranian, spoke fluently. Our subsequent exchanges became increasingly friendly, and I never asked how he'd fared with the enormous stake he'd amassed in Nokia.

The Broken Clock
Others mentioned that even a broken clock will provide the correct time twice a day. This is weak metaphor, though, and no one should be consoled by the thought that someone who has been predicting economic Armageddon will eventually be right. Do I actually believe the economy will be reduced to barter and that the chief concern of tens of million of us will be, not protecting our nest eggs, but securing food and fuel? I do.  Just such a scenario is the subject of a scary video published on YouTube by my friend Bill Bonner.  He sees oil hitting $500 a barrel and a gallon of gas fetching $50. Don't let the fact that Bill is pitching subscriptions to one of his publications put you off. The YouTube video runs 75 minutes and is dense with enlightening facts supporting his thesis.

Deflation is as much doomsday theorizing as I can handle, and so I don't much ponder $50 gasoline, Category 6 hurricanes, our dying coral reefs or the billions of people that some fearmongers flatly assert will die from the Covid jab. A deep-thinking Nostradamian I hear from now and then envisions a future so dark that it would make all of these disasters seem like a relative picnic. The real trouble will start, he says, with an earthquake that splits the Dome of the Rock, literally unleashing hell on Earth. Two world wars, global disease and famine will follow, killing off most of the world's population -- and so what would be the point of preparing? All we can do in the meantime is enjoy what pleasures life in these wretched times still come easily.