What the World Cup can tell us about inflation 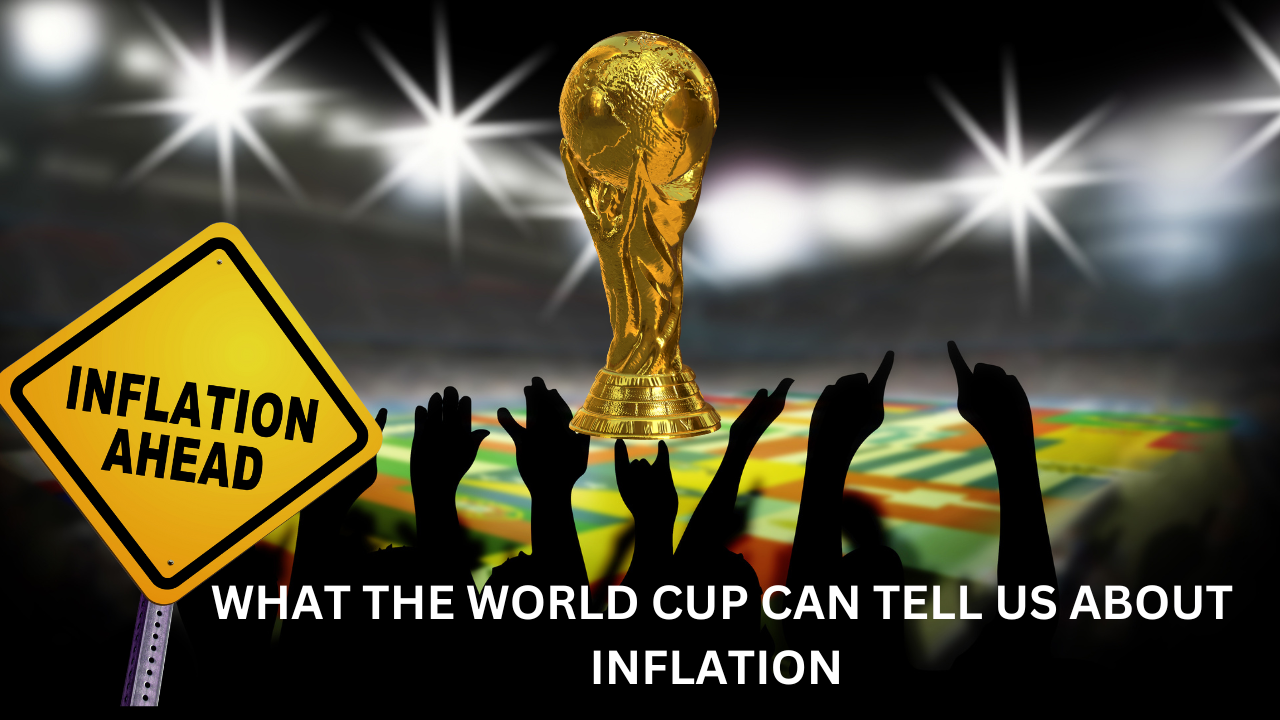 Football, love it or hate it, will dominate news outlets and Zoom small talk for the next month. Both the sport and the politics have entered the debating arenas, but there has been little mention of the whopping prize fund.

Yes, football is one of the world’s largest industries, but is the prize fund just because of the World Cup’s popularity, or is it really not so huge when you consider what has happened to the value of money? No wonder the solid gold trophy is the world’s most sought-after.

For this post, we take a break from the usual and discuss something near to many sports fans’ hearts – the FIFA World Cup!

Moreover, the World Cup will dominate sports fan attention spans over the next month. The opening match of the 2022 event was on November 20; Ecuador defeated the host country Qatar, which was the first time a host nation lost in the opening match.

It was also Qatar’s World Cup debut. It involves 32 teams at 6 different Additionally, the trophy will be passed to the winning team from France, the 2018 winner. The trophy stands at 36.5 cm tall with a weight of only 6.2 kg, with approximately 2kg of that weight the malachite discs at the bottom.

Keep in mind this is the gold price only, the trophy’s estimate cost US$50,000 to make. Also, the estimated value has grown exponentially to more than that US$20 million making it the most valuable trophy in the world. 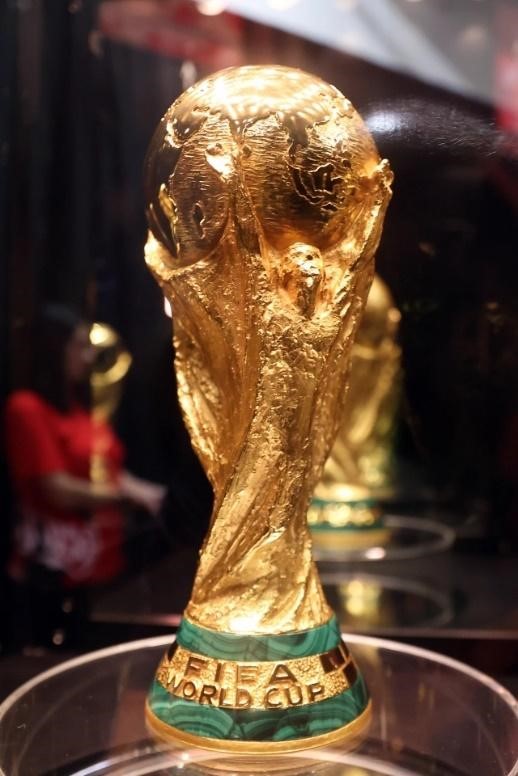 Correlation between The FIFA World Cup and Gold

It is not only the value of the gold in the trophy that has increased over the last 48 years, but the total prize money for the FIFA World Cup has also increased substantially. As mentioned above, the winning team will get $42 million in prize money this year.

Each of the other 31 teams that participate are also awarded prize money. A total of US$440 million is being awarded this year. In addition, each team is awarded money for preparation, a club benefit programme, and a club protection programme (i.e., player’s insurance). This all adds up to a total prize money fund of US$1 billion, compared to the 2018 total of US$791 million.

The total prize money was $20 million in 1982. This was when FIFA first officially announced how much prize money each team would receive. 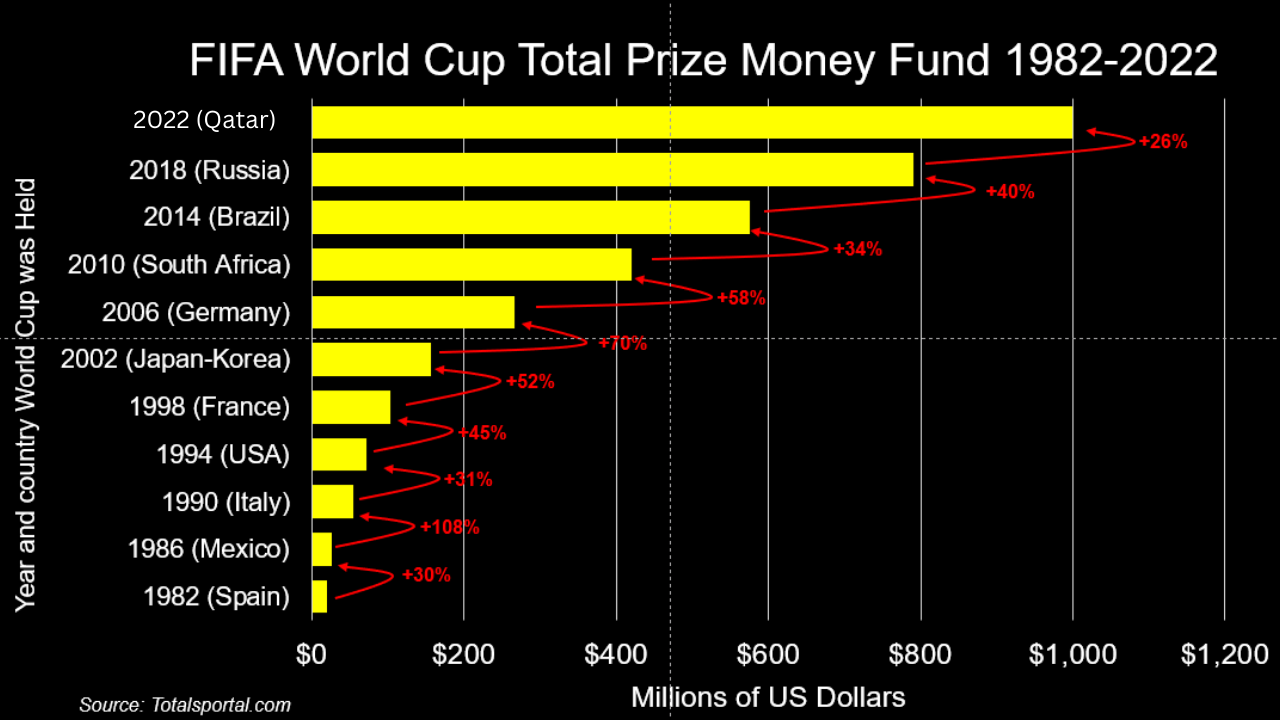 The increase in the Total Prize Money of US$209 million from the 2018 World Cup to this year’s US$1 billion total amount was the largest increase in actual dollars. However, in percentage terms, it was the smallest increase between events since the official prize was announced in 1982.

Maybe this 10.27% inflation rate is a better representation of cost inflation than the government produced inflation indices?  No one could ever definitively answer this question but it’s a great thing to ponder once your team exits (or wins!!) the tourney.

Correlation between The World Cup and Inflation

Come to think of this the 10.27% annual World Cup inflation rate is kind of close to the 7.96% inflation rate. If we calculate the price of gold over an even longer time frame.

Sporting prizes and salaries usually have much to do with business plans for broadcast growth. These do not directly link to official government inflation statistics. Yet to note that World Cup Total Prize packages grew at 10.27% annually. While the World Bank’s world consumer price inflation index has increased on average only half that amount at 5.32% since 1982.

stadiums for a total of 64 matches. This will conclude with the championship game on December 18.  In addition to the pure gold trophy, the winning team will be awarded $42 million in prize money.

Those inflation rates seem very similar to us if you back out the growth in footie as the most popular human game. So, remember to go for gold by owning physical metals.

Bored of football talk? Worry not. We have a whole channel that has absolutely nothing to do with football, for you to enjoy. Check out GoldCore TV. Here we have a great selection of gold and silver market analysis, commentary and interviews. Great for those who fancy a break from football.