Inflation-adjusted interest rates remain sharply negative, yet the COMEX gold price remains down on the year. On a historical basis, this is a very odd divergence, and it sets up an interesting trade as we move toward 2022.

Much has been made of the current drop in inflation-adjusted or "real" interest rates. And what are real interest rates? The rate of return a bondholder sees once inflation and loss of purchasing power is taken into account.

In its simplest form, subtract the annualized inflation rate from the nominal interest rate. See below:

So, any investor buying a 10-year U.S. treasury note today is locking in a 3.65% loss of purchasing power if inflation remains unchanged. Over time, that investor might expect inflation to moderate, but the 1.60% yield is locked in. Therefore, it's going to take a very sharp drop in future inflation in order to eventually draw out a positive real return over the life of the ten-year investment.

This sort of almost-guaranteed loss of purchasing power has historically been a very positive fundamental driver for gold ownership. Why? Well, what are the primary arguments against gold?

Combine these two and you could say that physical gold comes with a -0.50% "real return". But even if you overlook the fact that your ten-year note only promises a return of your original principal at maturity while physical gold offers potential price appreciation, the simple fact alone that -0.50% beats -3.65% every time should be reason enough to switch some funds from fixed income to gold.

And this has been the case historically. In the chart below from Myrmikan Research, you can plainly see the long-term relationship between real yields and gold: 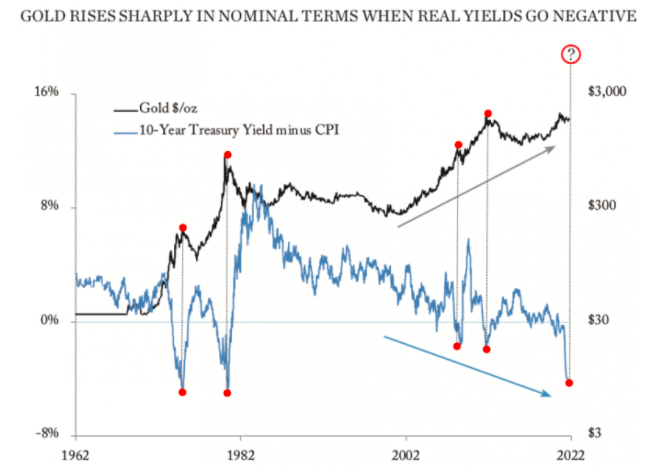 But note the divergence in 2021. For a closer look, check this chart from Twitter: 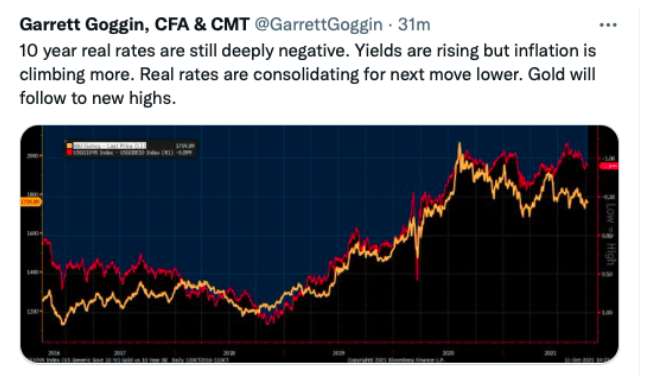 So what the heck is going on here? At TFMR, we were expecting this drop in real yields this year as stagflation takes hold and The Fed attempts to inflate away the debt. This led to a forecast of $2300 COMEX gold that has been 100% wrong. But why? Real yields are even more sharply lower than we forecast, but why isn't gold responding the way it has historically?

The answer lies in expectations. The central bankers have effectively convinced "the markets" that all of this price inflation—the supply chain disruptions, the soaring energy costs, the input shortages, the soaring home prices, the rising wages—all of it is "transitory". The central bankers tell us that it's all just a temporary nuisance and that price inflation will soon fall back under 2.0%.

But will it? Even some of the central bankers are starting to doubt themselves. Where CPI inflation back under 2.0% had been expected by later this year, many of these "experts" are now hedging their bets.

So what happens when inflation and stagflation eventually persist much longer than forecast? As usually happens when the markets misprice something, the correction is often furious and decisive. And if you don't think that the COMEX metals can move quickly once reality sets in, I'll remind you that the summer of 2020 saw COMEX gold rally 25% in eight weeks while COMEX silver moved 50% in just three weeks!

To paraphrase Hemingway: the market adjusted to the new reality slowly and then all at once.

So we'll see where we go from here. Maybe The Fed and "the markets" are correct? Maybe nominal yields will soar as The Fed tapers its QE plan, and maybe this, in turn, will crush inflation and real rates will turn positive?

Instead, recognition of that new economic reality may indeed appear "all at once". Prepare accordingly.